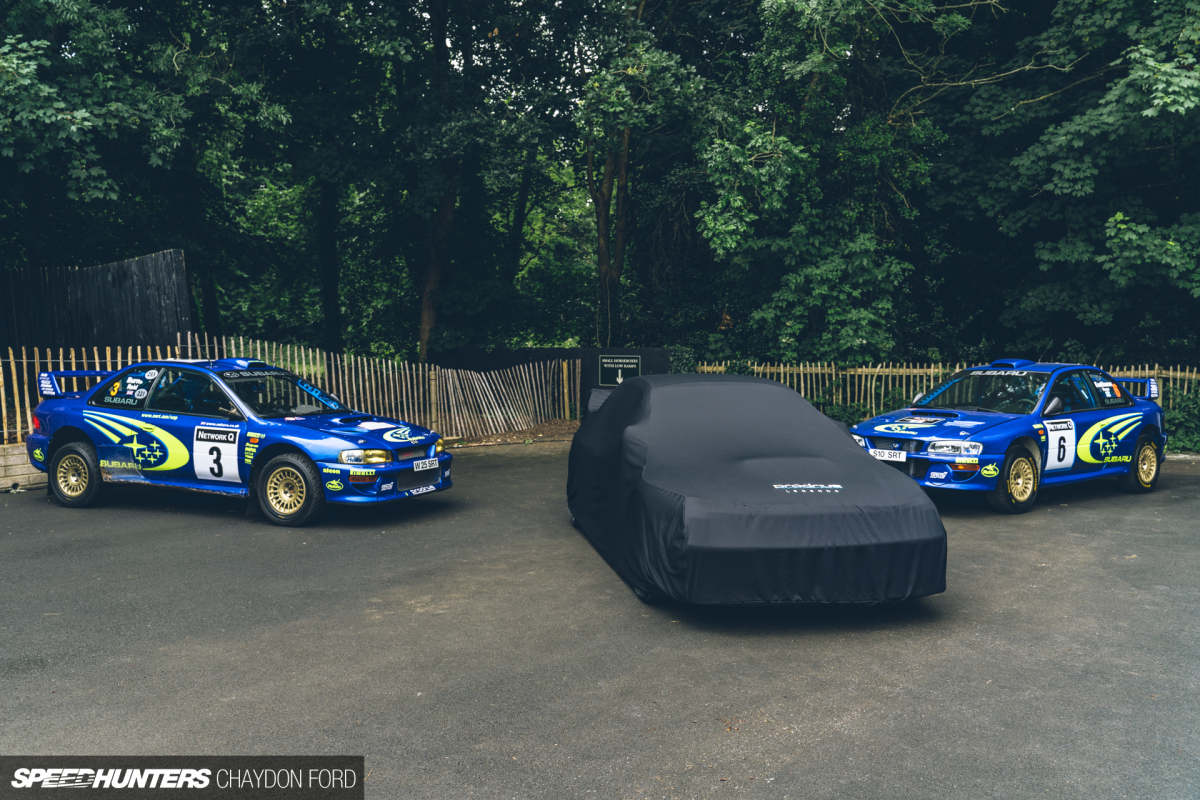 Months ago, Prodrive released a preview of an upcoming project, with the silhouette image unmistakably that of a two-door GC-series Impreza, and the code ‘P25′. Speculation naturally followed as more teasers were shared in the weeks leading up to the 2022 Goodwood Festival of Speed, where the car would make its official debut.

I visited Prodrive HQ a little while ago (feature coming soon!) and the P25 project was still very much hush-hush at the time. Despite my relentless interrogation, every question was met with ‘no comment”, but every so often a sly smile escaped, which alluded to it being something rather special. Given the collective knowledge, skillset and capability at Prodrive, it couldn’t be anything but.

Saturday morning in the Cathedral Paddock within Goodwood Estate, the P25 was revealed, flanked by two Subaru WRC cars. Richard Thompson, chief engineer on the P25 project gave a short talk alongside Mark Higgins, who has been instrumental in the car’s development as a test driver.

The P25 name is significant for a few reasons. 25 years ago, Prodrive debuted the first two-door Impreza World Rally Car. They were also heavily involved in the P1, a UK edition of the two-door GC8 body shape. So a naming convention that pays homage to both was appropriate, as well as referencing the limited run of 25 production cars.

The idea for the project came about 18 months ago and development progressed quickly, with team members scouring online auctions and owners clubs to purchase the donor cars.

To the untrained eye, the P25 looks very similar to the 22B, a road car Subaru released to celebrate their WRC victories (and not as a homologation car as is often believed). However, when you start looking more closely, the differences become more apparent.

The P25’s arch line is higher than that on the 22B and was moulded off the WRC cars to provide more clearance for the lightweight, forged 19-inch wheels as they cycle through the range of travel provided by custom-specification Bilstein springs and dampers. These were chosen to fit monstrous AP Racing callipers with 380mm rotors on the front, paired with 350mm rears.

Carbon fibre replaces a large portion of the exterior panels, with the bonnet, bumpers, roof, mirrors and bulbous arches all receiving the composite treatment. The carbon amounts to a substantial weight saving, and the car tips the scales at just over 1,200kg (2,645lb) wet.

The cabin largely maintains the look of the original interior, but nothing has been left untouched. All surfaces have been re-trimmed in an off-grey Alcantara-type material or carbon fibre. A more performance-oriented interior with a half cage and bucket seats is optional for customer cars.

One glaring omission is the shifter in the centre console. These cars run a 6-speed sequential gearbox actuated by a single paddle behind the steering wheel. Pull for upshift, push for downshift, as in the WRC cars, with gear changes taking just 80 milliseconds.

Launch control allows the car to distribute power optimally and automatically shift through the first three gears, taking the car from standstill to 60mph in well under four seconds consistently.

While the engine bay was off limits on the Festival of Speed weekend, we know that powering the P25 will be a 2.5L Subaru-based block, but completely re-engineered. The renowned Subaru burble has been forsaken in the interest of performance, with an equal-length exhaust manifold and exhaust made by Akrapovič.

Being a development car, many particulars would still be subject to change, but it worked flawlessly over the course of the weekend. Engineers were checking data logs and adjusting parameters regularly as the car only had minimal testing before its reveal, being completed only a few days prior.

The sticking point for many people is the price. Exclusivity doesn’t come cheap sadly and the P25 starts at approximately £500,000 including taxes. A lot of money, yes, but in a world where it is deemed socially acceptable for Singer to charge from £500,000 (£1.5 million for a DLS!) and where various other companies have restomods or recreations being announced at similar price points, it seems proportionate for the level of workmanship invested.

Even if you could afford one though, it’s too late, with all 25 having been spoken for.

Had Prodrive applied their expertise which usually goes into developing championship-winning race cars to a different platform, it may have been seen as less controversial, but I applaud them for referencing such a pivotal period in their history.

There is every likelihood that many of these cars will sit in private collections and rarely see the light of day, which is a huge shame. But since Subaru has largely abandoned serious performance road cars, I for one am happy the P25 exists, irrespective of the cost.

The Goodwood Festival of Speed on Speedhunters