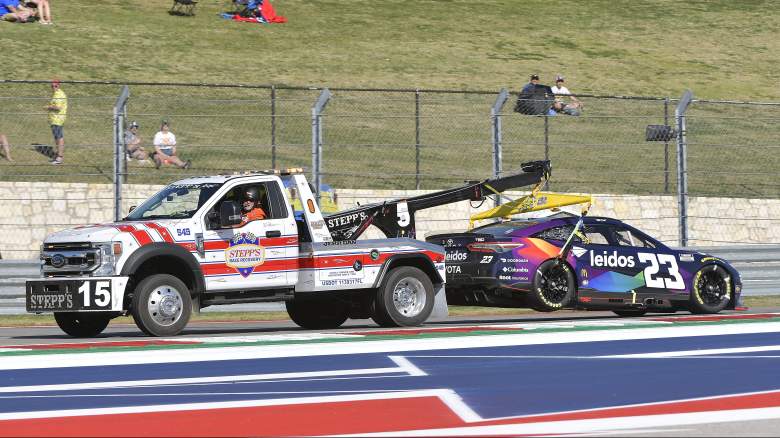 Bubba Wallace’s No. 23 exits the race after losing a wheel.

The sanctioning body has issued penalties to 23XI Racing after the Cup Series race at Circuit of the Americas. NASCAR has suspended three members of Bubba Wallace‘s No. 23 team after the Toyota Camry lost a wheel.

NASCAR announced the news on March 29. A release noted that the team violated Sections 10.5.2.6 of the NASCAR Rule Book: Loss or separation of an improperly installed tire/wheel from the vehicle. Crew chief Robert “Bootie” Barker and crew members Caleb Dirks (jackman) and Adam Riley (rear-tire changer) all received four-race suspensions. 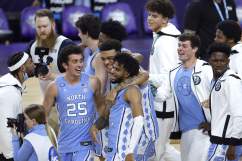 The penalty stems from an incident on Lap 45 of the EchoPark Automotive Grand Prix. The left rear wheel separated from Wallace’s No. 23 Toyota Camry, bringing out the caution flag in the process. Wallace received a tow back to the garage, but he was unable to return to the track. He ended the day 38th overall after ending Stage 2 in the 10th position.

ALL the latest NASCAR news straight to your inbox! Subscribe to the Heavy on NASCAR newsletter here!

Results this past weekend didn’t show the progress we’ve made on road courses. All things considered though, cool to see things come full circle and have @LeidosInc back on board. Lot of history together, and more memories to come. pic.twitter.com/qdp6W2K7tZ

23XI Racing quickly responded to the penalties after NASCAR made the announcement. The team confirmed that it would not follow the lead of Kaulig Racing and Front Row Motorsports, two organizations that received the same penalties after losing wheels and decided to appeal.

“Following the recently issued penalty by NASCAR related to an incident at Circuit of the Americas, Dave Rogers, 23XI Performance Director, will serve as acting crew chief for the No. 23 team. The team will not appeal the decision,” 23XI Racing said on March 29.

Rogers, who takes over for Barker, is currently in his first season with 23XI Racing. He joined the organization as the Performance Director after Joe Gibbs Racing downsized from four to three Xfinity Series teams. He will return to the pit box after previously working as the crew chief for multiple champions.

Rogers has 277 Cup Series races and 194 Xfinity Series races on his crew chief resume, and he has celebrated a total of 39 times in Victory Lane. This run includes 18 Cup Series wins split between Kyle Busch, Denny Hamlin, and Carl Edwards. Rogers also served as the crew chief for Daniel Hemric during the 2021 Xfinity Series season, which culminated with a championship-sealing win at Phoenix Raceway.

GettyBubba Wallace pulled double-duty during the trip to Circuit of the Americas.

Wallace pulled double-duty during the trip to Circuit of the Americas, and he ran well at several points. However, mechanical issues caused disrupted both races and took away an opportunity for a potential Xfinity Series win.

The Alabama native joined Joe Gibbs Racing for the Pit Boss 250 on March 26, and he drove the No. 18 Dr. Pepper Toyota Supra. He started 15th overall, but he spent several laps running inside the top five.

Wallace first made his move near the front of the pack during Stage 1. He took over fifth place overall, but he made a scheduled pit stop instead of trying to secure stage points. Wallace started the second stage fourth overall, and he worked his way to second place. He remained in this position for several laps, but he began experiencing a transmission issue.

The final stage featured Wallace battling his transmission instead of trying to secure the win. He ultimately ended the day in the 28th position while Kaulig Racing’s AJ Allmendinger won his first race of the year.

READ NEXT: Mike Joy Shares How Matt Kenseth Was ‘Forced’ Into Call With Joey Logano