Launched in Malaysia last December, the Honda City Hatchback arrived as a bodystyle that much more closely resembles the City sedan, at least from the front, as the current, fourth-generation Honda Jazz has not found its way officially into the Malaysian market.

Why not the Jazz? According to City Hatchback large project leader Rei Sakamoto, the City nameplate has become a well-built brand, and development of both sedan and hatchback models were incorporated to maximise efficiency and to build both models on the same platform, and this decision was made for the regional market.

Therefore, it is the City nameplate in both sedan and hatchback forms that we receive in the Malaysian market, and here we have brought together an example of each – a City 1.5L V sedan and a City Hatchback 1.5 RS e:HEV.

The City Hatchback here in RS trim packs the e:HEV hybrid powertrain, which packs a 109 PS/253 Nm electric motor for propulsion, and is charged by an Atkinson-cycle 1.5 litre engine making 98 PS at 5,600 rpm to 6,400 rpm and 127 Nm from 4,500 rpm to 5,000 rpm; the latter can also clutch in to augment the e-motor for added drive at higher speeds where it is at its most efficient.

The City sedan and City Hatchback closely resemble each other, especially viewed from the front, albeit with differences in equipment for the hatchback in RS trim that brings a honeycomb grille in black with a gloss black grille bar, darkened internal sections for its LED headlamps, front fog lamp surrounds with extended louvres and a faux diffuser insert for the rear bumper.

For comparison, the front fascia of the City sedan in 1.5 V trim gets a chromed grille bar, horizontally-slatted grille and regular-sized foglamp surround inserts, along with a body-coloured lower intake edge (this is black on the hatchback’s RS trim).

Moving along to the sides, the 1.5 V sedan gets side mirror covers in its body colour while these on the 1.5 RS e:HEV hatch are in gloss black. Rolling stock on the 1.5 RS e:HEV are 16-inch two-tone machine-finished alloy wheels shod in tyres measuring 185/55, while the City 1.5 V sedan wears identically sized wheels and tyres, though with the former in a single-tone finish. 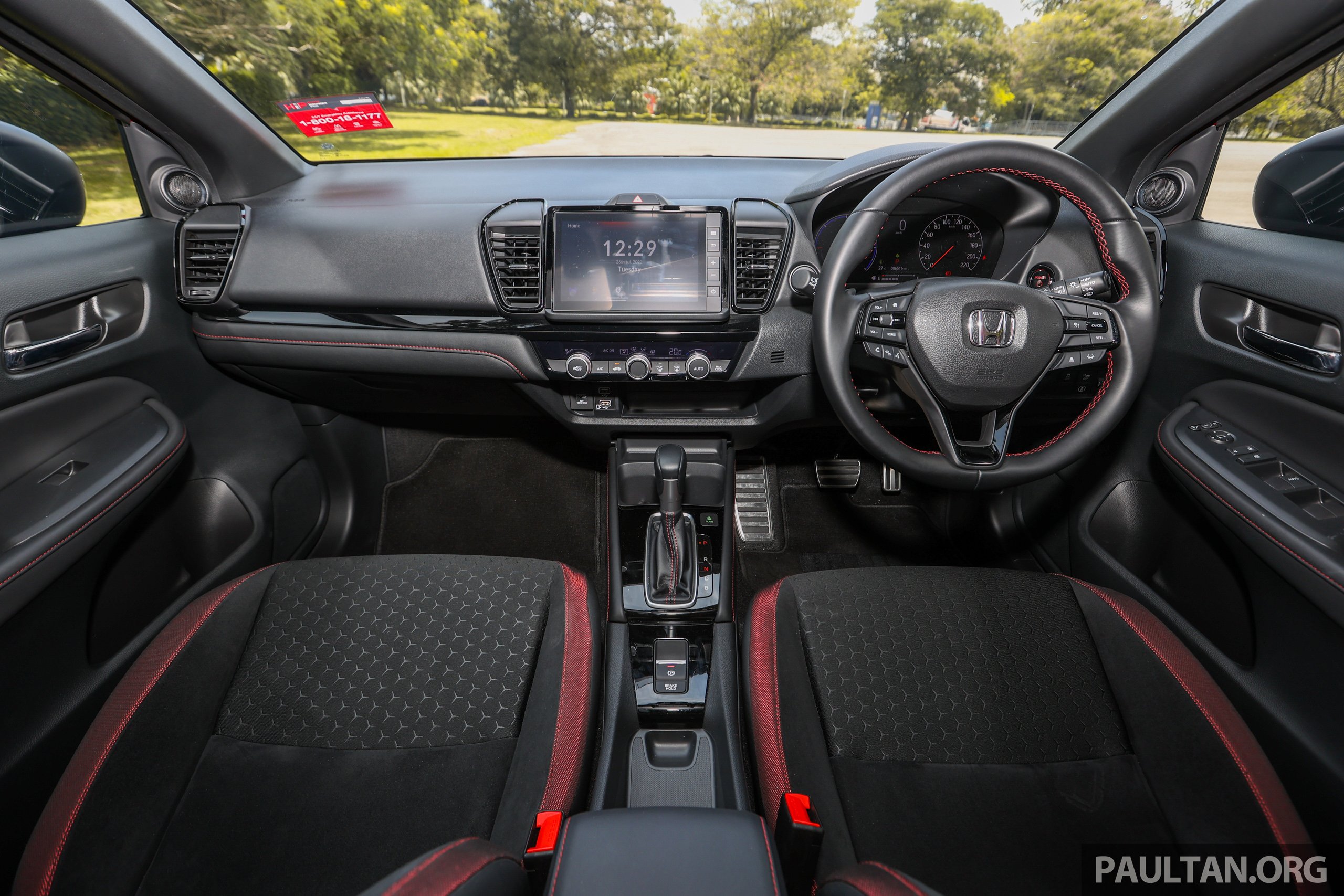 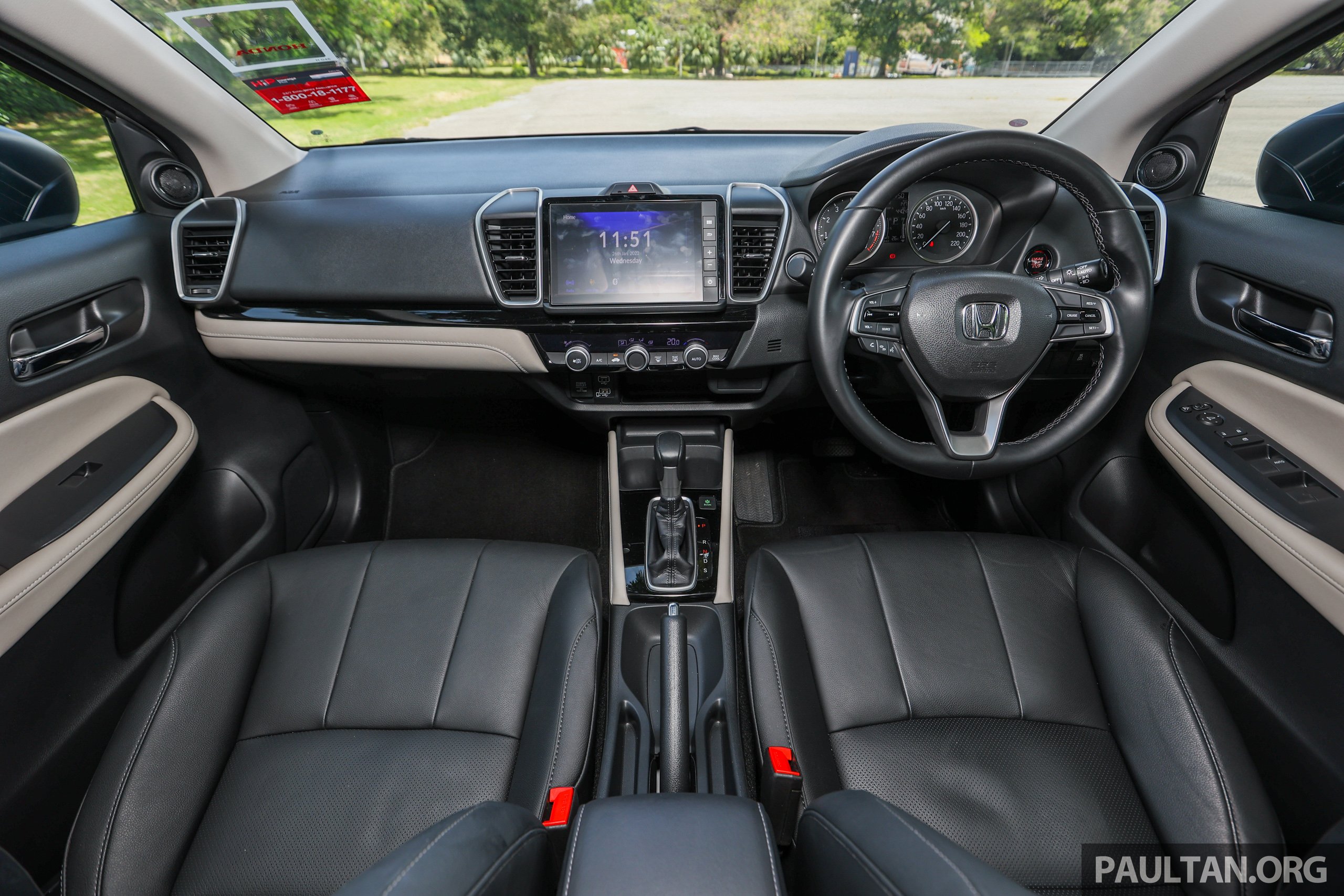 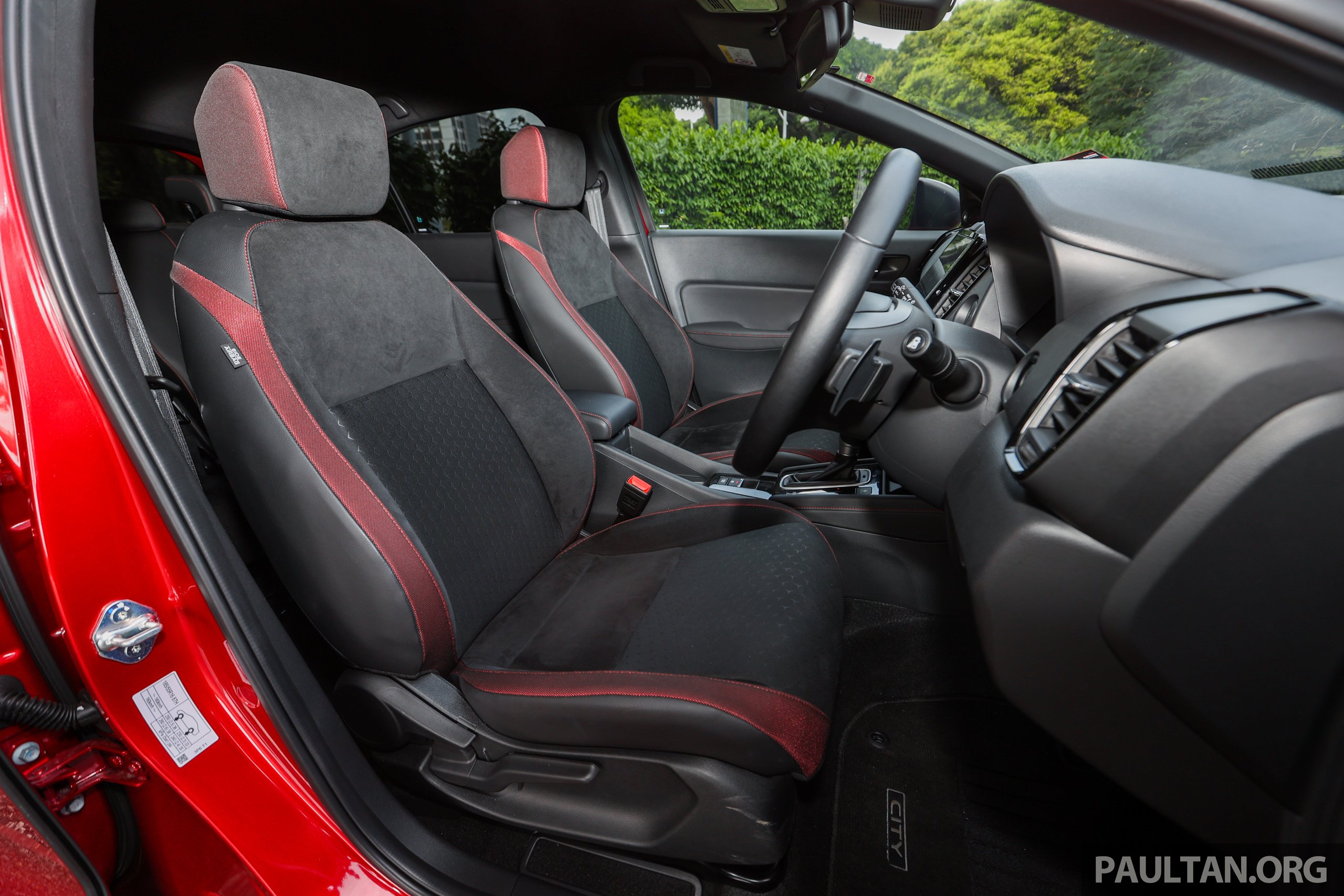 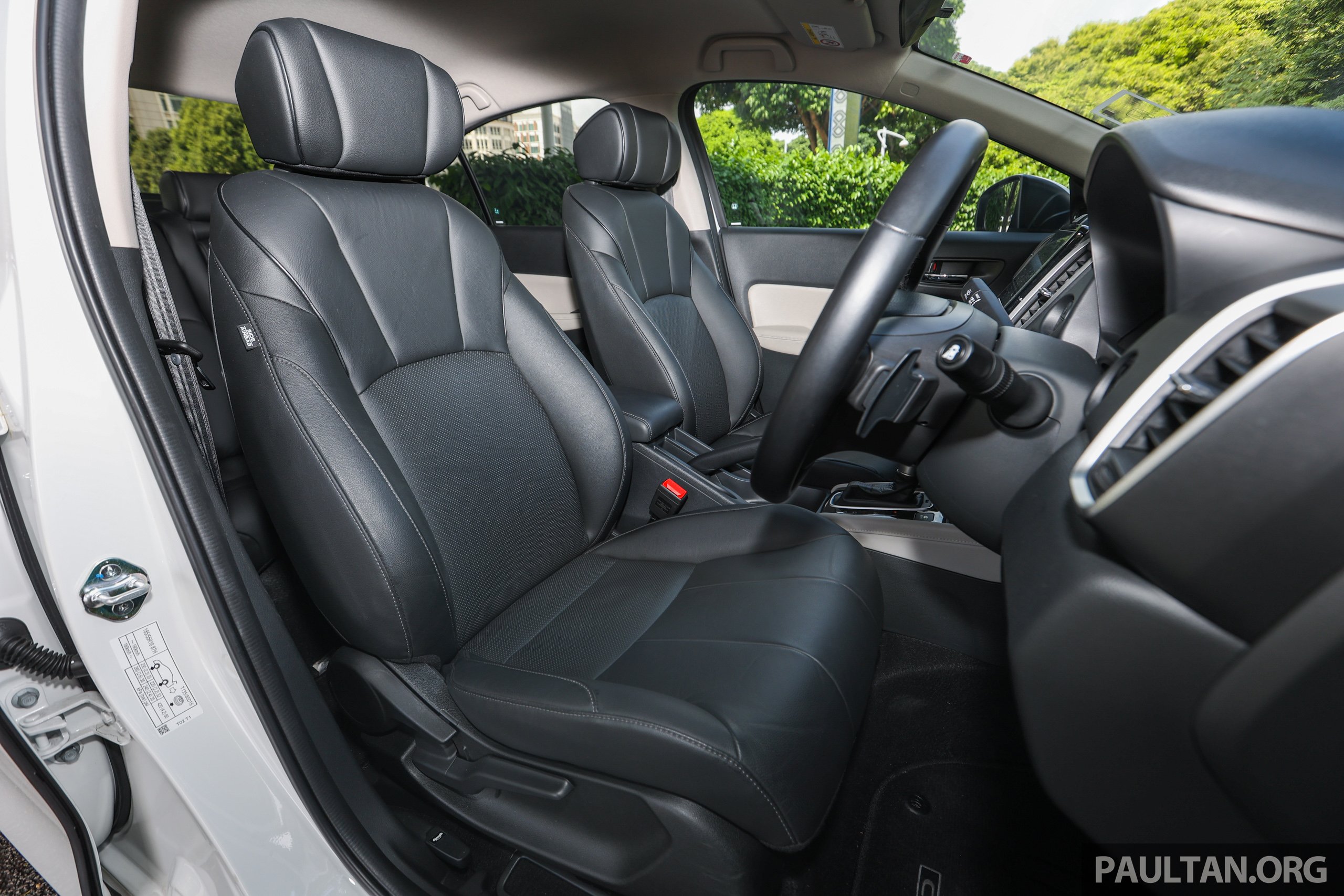 Dashboard architecture is the same between the sedan and hatchback, with detail differences brought by their respective trim. packages. The RS trim of the Hatchback brings gloss black trim for steering wheel inserts, air-conditioning vent surrounds and contrasting red inserts on its leather and suede upholstery along with red contrast stitching on the steering wheel.

By comparison, the black leather upholstery in the 1.5 V sedan is offset by cream-coloured panels, matching contrast stitching and silver air-conditioning vent surrounds. 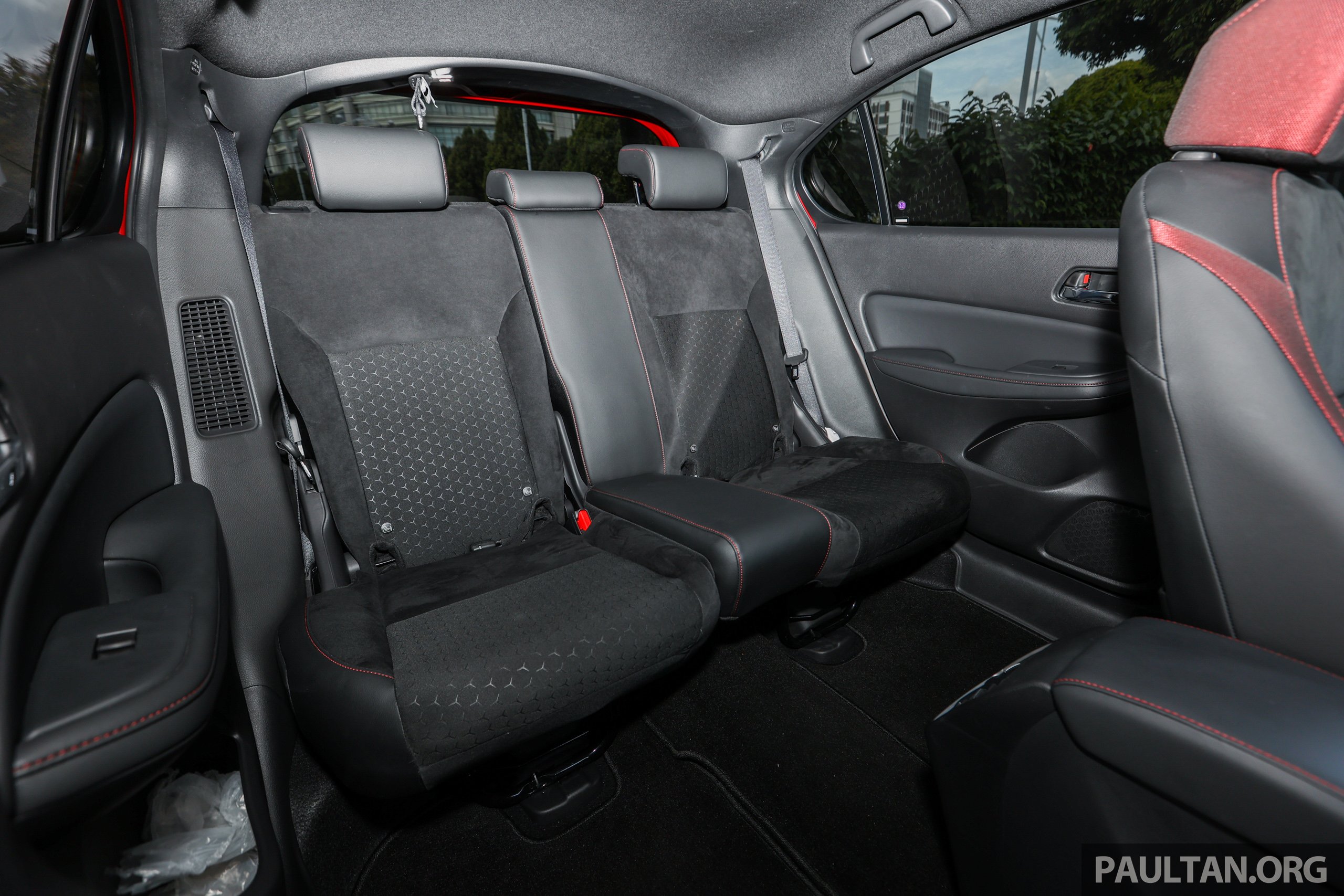 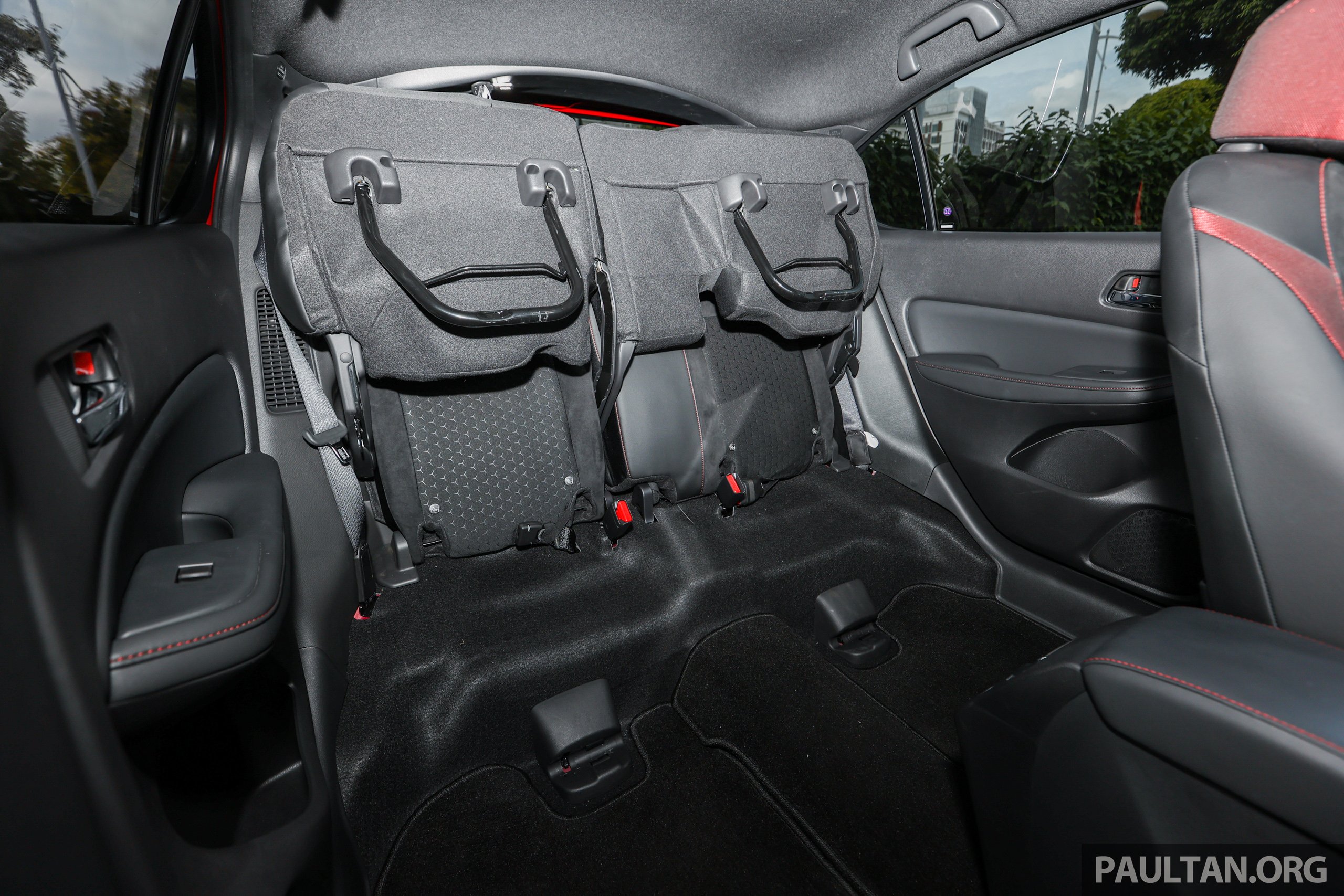 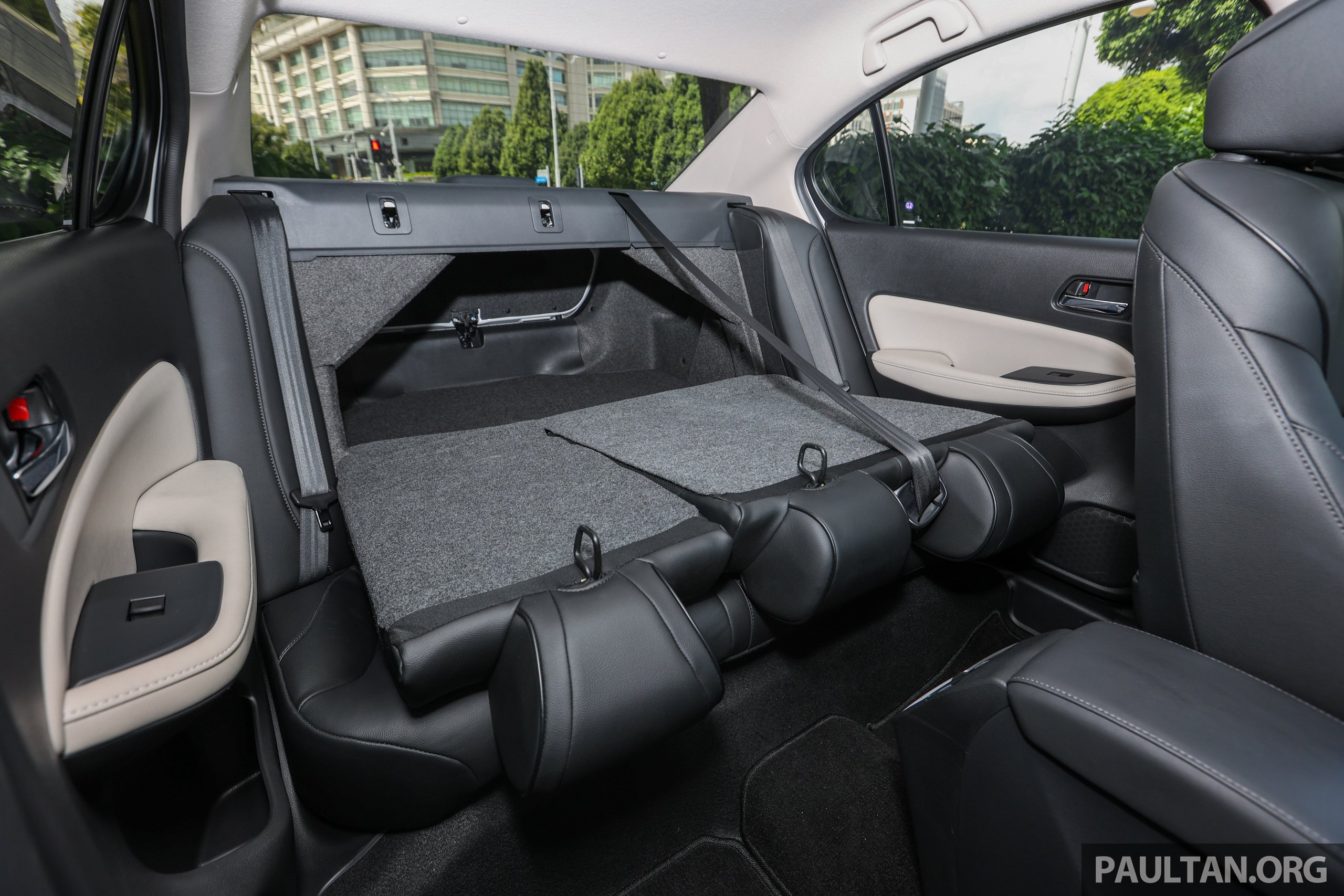 At first glance, the rear passenger compartment of the City Hatchback and the sedan appear largely similar when the seats are in place. The versatility of the Hatchback becomes apparent when the Ultra seats can be folded to accommodate tall objects in the cabin, with the seat base folding rearwards to make space on the cabin floor for cargo.

The rear seats in the City sedan fold down too, albeit with a smaller aperture due to the fixed rear bulkhead. In terms of outright luggage capacity, the City 1.5 V sedan holds 519 litres (409 litres if you plump for the RS e:HEV hybrid due to its intelligent power unit), while the City Hatchback holds 289 litres with its seats in place, or 841 litres with the rear seats folded. Loaded up to its roof, the Hatchback will take 1,189 litres.

As of July 1, 2022, these are priced at RM90,600 (without Sensing suite) and RM109,800, respectively, following the brand’s adjustment of prices which now include SST. Both the City Hatchback and City sedan are covered by a five-year, unlimited-mileage warranty and come with five times free-labour servicing. On hybrid variants, the lithium-ion battery gets its own eight-year, unlimited-mileage warranty.

We have already spent time with examples of the two bodystyles. Here, you can check out the in-depth reviews of the City sedan as well as of the Hatchback.