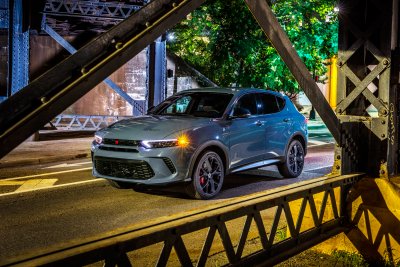 Dodge is dipping back into the electrification waters with its new hybrid, the second the company has produced (the first was the 2009 Durango). The addition to the “Brotherhood of Muscle” lands in the hot compact crossover segment using another classic name: Dodge Hornet.

The 2023 Dodge Hornet uses the same platform as the also-Stellantis-owned Alfa Romeo Tonale, but with a ton of Dodge DNA injected from looks to powertrain. It won’t sport the company’s traditional crosshair grille like the decade-old concept of the same name.

The Hornet name started with the Hudson Hornet in the 1940s. When Hudson was swallowed by American Motor Corporation it became the compact AMC Hornet. AMC was then folded into by Chrysler, giving the company, now owned by Stellantis, access to the nameplate.

“This is the hottest segment in the industry. This is a million-unit segment, and in the next five years it is going to grow almost 50 percent,” Tim Kuniskis, Dodge CEO said at an event at the Stellantis North America headquarters in Auburn Hills, Michigan.

“The car that we’re going to bring here is going to be an interesting offer in the marketplace. We looked at why customers buy a car: its price, value and fuel economy. I’m getting tired even saying what you don’t see on that list until you get down to like 15th, power, acceleration, fun to drive and brand image.”

Continuing that brand image is the new Hornet, which will come in two grades, GT and R/T. The GT trim will house the company’s Hurricane turbocharged four-cylinder engine making 295 horsepower (hp) and over 265 pound-feet (lb-ft) of torque with all-wheel drive and a nine-speed automatic transmission. Kuniskis says it will be the fastest and quickest compact in the segment.

“This seems like the perfect little politically correct segment for us rile up and disrupt. So that’s exactly what we’re going to do. We’re gonna go on there with something that nobody else is shopping for in that segment. We’re going to give them something new, something fresh,” said Kuniskis.

The R/T comes next as the hybrid option with a turbocharged 1.3-liter four-cylinder engine along with the company’s E-Axle traction motor delivering all-wheel drive with a combined 285 hp and 383 lb-ft of torque. It also offers 30 miles of all-electric range, but with a six-speed automatic transmission.

“That’s almost 100 lb-ft better than the internal combustion engine car. That’s why we call it the R/T. We don’t call it the E-Model and play up the battery. We’re using the electrification in this car as a performance step up from this car and that’s why it’s from the R/T batch. Nobody buys a Dodge based on a spreadsheet,” said Kuniskis.

All Hornets will come with the new PowerShot button. That adds another 25 hp for short bursts and it can take the zero-to-60 miles per hour (mph) time down a whole second, the company says (6.5 to 5.5 in the GT).

Through the company’s Direct Connection high-performance parts service (another throwback) buyers can also turn the Hornet GT into a “new” GLH, a play on the old Dodge Omni name for its high-performance version. That comes with lowering springs and a sports exhaust among other options.

Dodge extended the look of the Durango to the Hornet with large air openings in front and a full-width taillight, the new “Rhombi” logo and dual exhaust in back.

A new cartoon Hornet badge joins the Hellcat and Scat Pack badges for the brand.

“This was a fun car for us to do. The Hornet was just a blast in the sense of how we design a car. There’s going to be a little brother to the Brotherhood of Muscle that we have with Durango, Challenger and Charger,” said Scott Krugger, head of Dodge Exterior Design.

“What we’re trying to do is make a car that is very gestural, something that really looks fast when it’s sitting still with more coupe in the roofline. We did not want to do a utility vehicle, we wanted to do a compact muscle car. That’s really what we’re going after a crossover that has that muscle car appearance, a very clean body side and very pure.”

Inside, the Hornet holds a similar look to the Charger and Challenger, though the angles are a little sharper. Everything is still focused on the driver. Like the rest of the Dodges, the Hornet will have a digital instrument cluster (this one measuring 12.3 inches) behind the steering wheel with customizable looks and performance gauges.

The right side can feature a tachometer, with media, phone, trip, fuel economy, or other information inside the digital gauge. The center can feature navigation, g-force meter, driver assist messages and more. On hybrid Hornets, the central portion will also show charging information and efficiency coaching for better fuel economy.

The Hornet cabin includes a flat-bottom steering wheel with dark materials and red accents, and a start button on the console. The cloth seats have a texture to them in addition to more bolstering than one would usually see in this class. R/T models get leather-wrapped seats and more red accents.

It will be competing in one of the toughest segments elbowing for sales alongside the Toyota RAV4 and Honda CR-V, both of which start for less money but both with smaller engines. From the American side there’s the Ford Escape and the Chevrolet Equinox. Ford, Honda and Toyota offer hybrids; the Equinox EV is coming in 2024.

“Dodge has built its brand around its heritage as well as – and in some cases better than – any other in the industry,” Hagerty Vice President of Car Culture Jonathan Klinger told Newsweek. “Names are nostalgia and can be as important as design and performance at invoking emotion and even purchase decisions. You can trust that a little bit of the original DNA will carry through to whatever their team is developing. If the new Dodge Hornet has half the charm of the original AMC, they will be responsible for a lot of smiles.”

Pricing for the 2023 Dodge Hornet starts below $30,000. The Hornet R/T will start around $39,500. Exact pricing is expected to be announced closer to the model’s launch date.