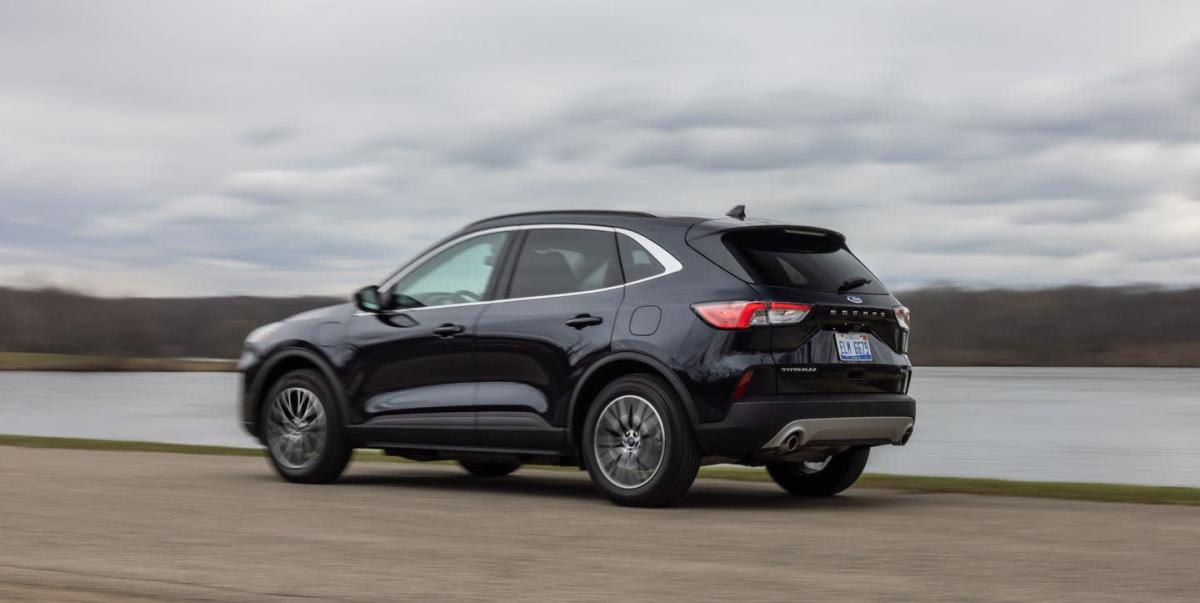 The Ford Escape became the first hybrid SUV back in 2004, and while the Escape dropped the gas-electric powertrain with its third-generation model, the current fourth-gen Escape offers two kinds of a hybrids. Like the Toyota RAV4 and the newly redesigned Hyundai Tucson, the Ford Escape can be had as a traditional-style hybrid and a recently added plug-in hybrid (there are also two nonhybrid engines). So, what does the PHEV bring to the party?

Whereas the Escape’s base gasoline engine is 181-hp turbocharged 1.5-liter three-cylinder, the hybrids employ a larger, naturally aspirated 2.5-liter four, which in combination with electric-motor assist is good for 200 horsepower (HEV) or 221 horsepower (PHEV). The regular hybrid is available with front- or all-wheel drive, but the PHEV is front-drive only. The plug-in’s estimated 11.2 kWh of usable juice provides a useful 37 miles of EV range, according to the EPA; driving at highway speed, we got 25 miles out of it—still a respectable showing, although short of the RAV4 Prime’s 32 miles.

The EPA estimates the Escape plug-in hybrid will return 40 mpg once the battery is depleted, which is about equal to the regular hybrid’s combined estimates of 41 mpg (FWD) and 40 mpg (AWD); that’s also considerably better than the thriftiest nonhybrid Escape, which carries an EPA combined estimate of 30 mpg. The PHEV returned 35 mpg in our 75-mph highway fuel-economy test—3 mpg shy of the EPA’s rating and the same as we got with the base-engine model—and averaged 36 MPGe overall.

The Escape plug-in-hybrid system’s multiple drive modes provide a good deal of flexibility. In addition to the default mode, which uses gas or electric power as the system sees fit, there’s one to conserve battery charge for later (although it won’t keep the battery at 100 percent), another that allows the engine to add charge to the battery (this is more effective in stop-and-go traffic than in highway cruising), and a pure-EV mode. The latter doesn’t wake the engine even when the accelerator is floored, although a message in the cluster display will invite the driver to enable the gas engine by hitting the OK button on the steering wheel. Drivers may want to accept that invitation because—on the highway particularly— the car gathers speed slowly using only battery power. The powertrain is considerably quieter, though, when operating as an electric. As a hybrid, it’s a relatively raucous 76 decibels under full-throttle acceleration, 3 more than the RAV4 Prime.

With the gas engine contributing its 165 horsepower to the electric motor’s output, the Escape PHEV takes 7.7 seconds to reach 60 mph, which exactly matched our result with the FWD hybrid Escape and is fractionally better than the 8.0 seconds we recorded with the base-engine car. The quarter-mile passes in 16.0 seconds at 91 mph.

Those PHEV acceleration figures, however, are well behind the 302-hp RAV4 Prime plug-in’s 5.4-second run to 60 and 14.0-second quarter-mile at 100 mph. The Toyota is also 0.5 second quicker from 30 to 50 mph and 1.1 seconds quicker from 50 to 70 mph. It’s clear that whereas Toyota is pitching its PHEV as the performance variant, Ford is not. Buyers seeking the quickest Escape should instead check out the 250-hp turbocharged 2.0-liter four-cylinder, which zoomed to 60 mph in 5.7 seconds in our testing. It’s exclusive to the top-drawer Titanium trim and the all-wheel-drive SEL, however.

The Escape’s chassis tuning isn’t as well sorted as the best in class. The stiff suspension could do more to isolate bumps, and yet you wouldn’t put the Escape on the same sporty plane as the Mazda CX-5. The steering in Normal mode is fine on center but has no buildup of effort as you wind on lock; still, it’s preferable to Sport mode, which is weirdly stiff and springy. Brake modulation is fine at the top of the pedal’s travel but gets a little grabby in the last few feet before a stop. Get it just right, and you’re sometimes rewarded with a “brake coach: 100 percent energy returned” attaboy message. Mash the brake pedal at 70 mph, and the Escape PHEV comes to a halt in 164 feet, a solid result that’s a full 31 feet shorter than the RAV4 Prime managed.

Even in its base trim, the plug-in-hybrid Escape comes standard with a 12.3-inch digital instrument cluster (it’s otherwise reserved for the Titanium model). The central display measures 8.0 inches and its SYNC 3 operating system is hard to fault, with a home screen that shows multiple functions at once, straightforward overall operation, and easy (although not wireless) Apple CarPlay and Android Auto smartphone pairing. The console has adequate storage, along with USB-A and USB-C ports. An upside of the couple-years-old interior design is that there are physical knobs and buttons to work the audio system and the climate control.

The driver’s seating position is fine with good forward visibility, but the seat cushion is weirdly convex feeling, and its lateral support melts away in curves. Passenger space is adequate, and the rear seat reclines, although it’s less roomy here than in a Honda CR-V. Compared to the nonhybrid version, the PHEV’s higher load floor trims cargo space by between 3 and 5 cubic feet, resulting in 34 cubic feet of luggage space behind the rear seats and 61 cubic feet with the seatbacks folded. That’s a bit less than most others in the segment.

The cabin has the basics covered, but neither the design nor the materials are anything special. The embossed plastic on the door panels—even in our Titanium-trim test car—is a notable offender, and there’s more of it on the center console. The strip of blond faux-wood on the dash is perhaps the most interesting touch.

The PHEV is available in the same SE, SEL, and Titanium trims as other Escapes, skipping only the base S. Currently, the upcharge for the PHEV over the regular hybrid ranges from $5270 to $5640, which is more than offset by a $6843 federal tax credit.

This PHEV drivetrain works well as a gas saver even if it doesn’t have any real performance advantage over the regular hybrid or the base gasoline engine. And while the EV range can’t match the RAV4 Prime’s, it’s enough to make it worth the effort to plug in. The Escape itself, though, is a mid-rank player overall. This powertrain might be better utilized in the more characterful Bronco Sport or Maverick pickup—and since those two models share the Escape’s platform, it’s possible we could see exactly that.