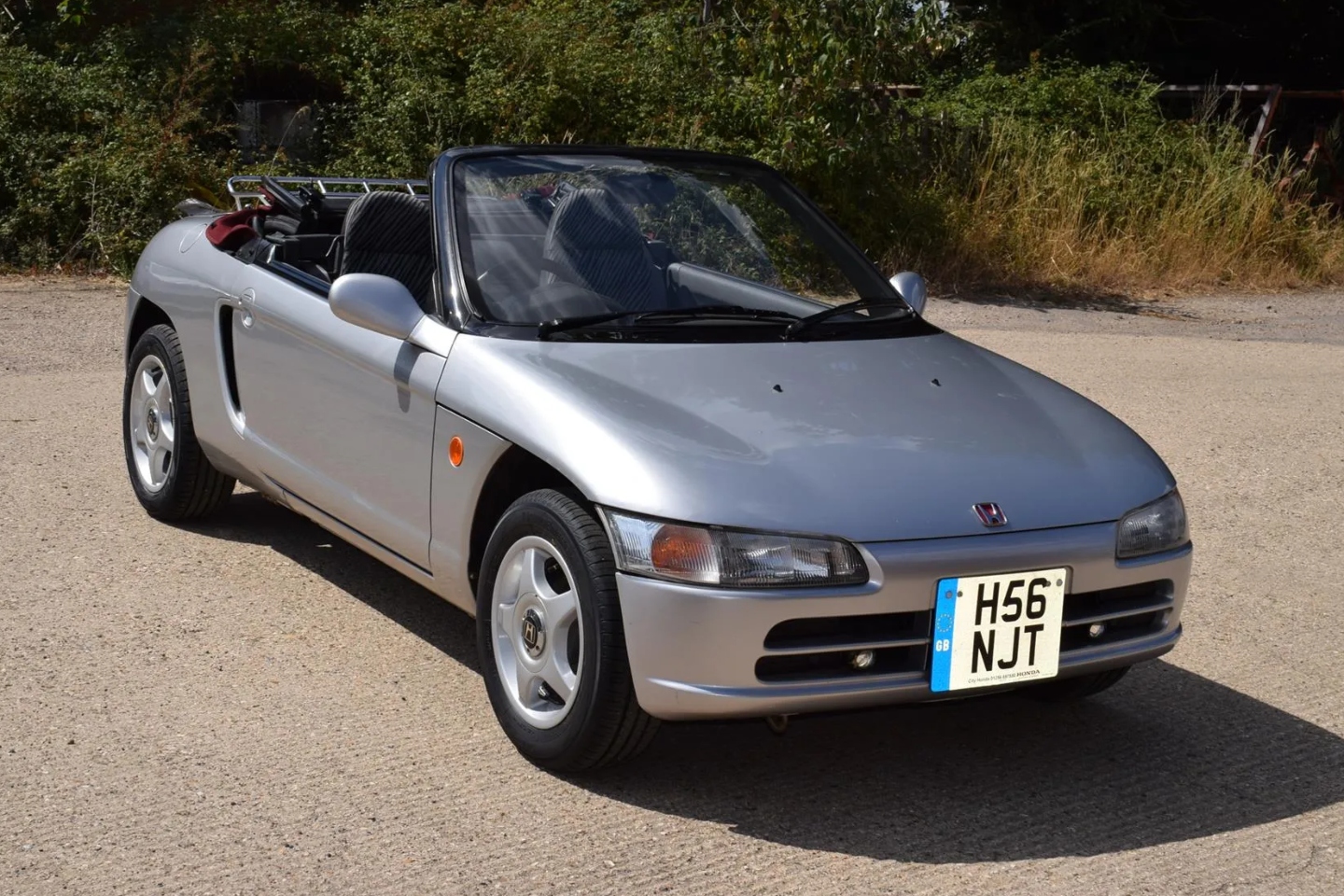 Fancy a small, Japanese, rear-wheel-drive, open-top car? Then clearly the Mazda MX-5 will be at the forefront of any list. It has to be. What else is there in the modern-classic mould that’s dinky and roofless? But what if your garage is cluttered? What if you can’t really be bothered to turf out those boxes of old family photographs, or the washing machine and tumble-dryer for that matter? All the paraphernalia that means even an MX-5 won’t fit. Well, how about a Honda Beat?

The baby Beat makes the MX-5 look like a stretched SL. Seriously. The current MX-5 is 3,915mm long and 1,735 wide (with the mirrors folded). The Beat beats that by a country mile. It’s just 3,295mm long and 1,395mm wide. It’s basically a Matchbox car that you can actually drive. And then there’s the weight. Mazda made a huge song and dance in 2015 when it launched the current MX-5 that it weighed around same as the original, at just over 1,000kg. Well, buy it a subscription to Weight Watches, please. The Beat weighs just 760kg, which is lighter than the Hindenburg.

It is, of course, a Japanese kei car, which is a class of car for the home market that brought useful tax advantages. Also, very importantly, if you lived in the crowded metropolis of Tokyo or any other restrictive Japanese city, you didn’t need to prove you had a parking space before you were allowed to buy it. To qualify as a kei car at the time the Beat was built, the footprint could be no bigger than 3,300mm by 1,400mm. Many were boxy little MPVs for the sensible of thinking, but some, like the Beat and the Suzuki Cappuccino, sprinkled some fun onto the microcar’s magic formula. 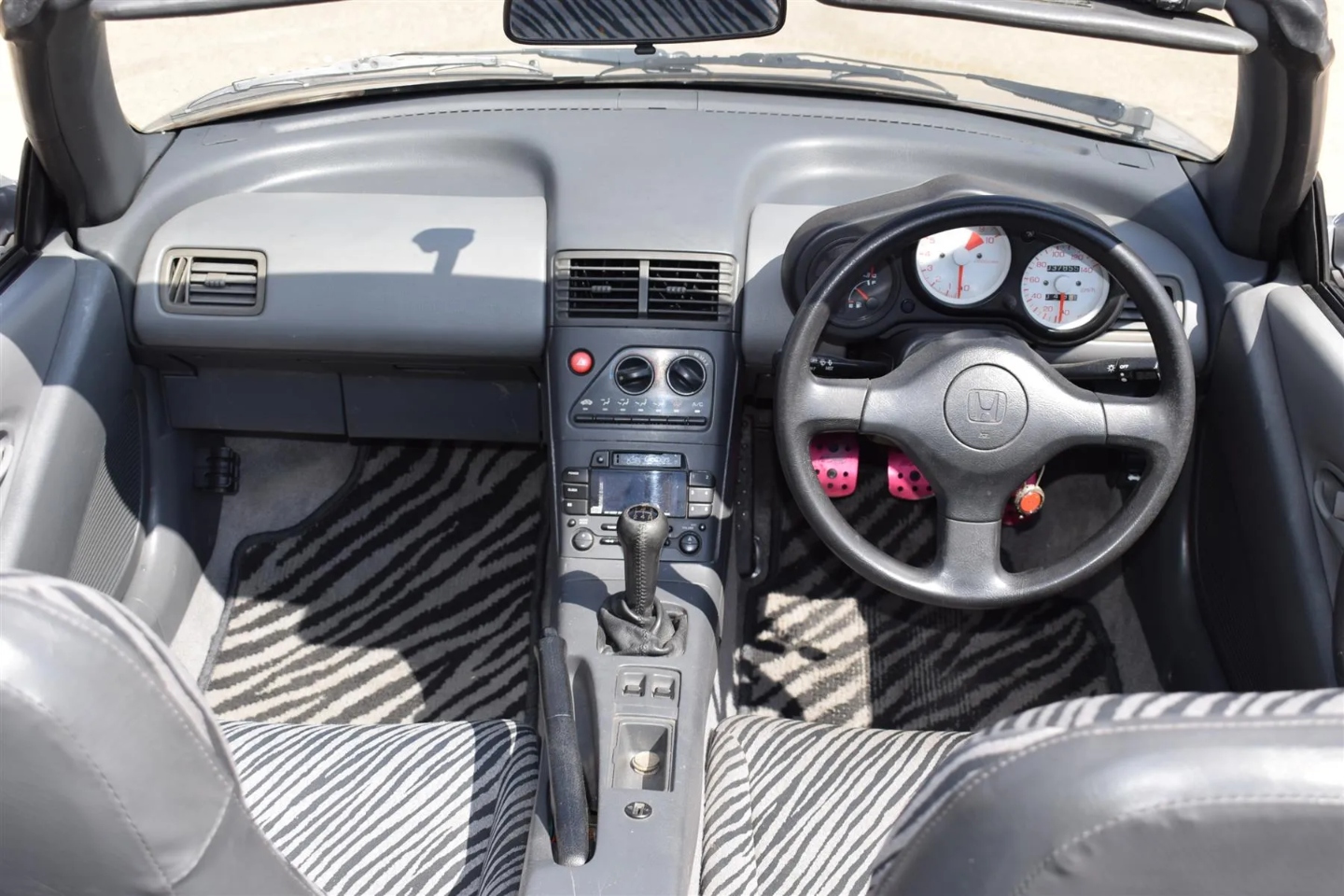 There was – and still is – a catch, though. The engines were limited to 660cc and 64hp. But while Suzuki turbocharged the Cappuccino to hit that mighty power threshold, Honda did what Honda does best: make revs. Many, many revs. It made its little Bonzi car’s motor scream to 8,500rpm, which, for the record, is higher than that other 90s mid-engined Honda, the NSX – albeit that had twice the number of cylinders and more than three times the capacity. To help achieve its freneticism, the 656cc, 12-valve triple even came with individual throttle bodies. Proper stuff, then.

The lack of a turbo  means there’s bugger all performance below 4,000rpm. That’s fine. It means the Beat positively encourages you rag the rivets out of it at all times. Peak torque is just 44lb ft and doesn’t arrive until 7,000rpm, and once you’re up there you may as well keep the throttle pinned in search of the power crescendo, too. That chimes at a heady 8,100rpm. And you can watch it all happening on the motorbike-style instrument binnacle with, naturally, a central rev counter.

Obviously, that kind of peaky performance dictates that you’ll never stop using the gearbox. No problem there, either. Along with high-revving engines, Honda also knows how to build a great manual ‘box. In this case a five-speeder, with the ideal combination of a short shift and an emphatically defined gate. It’s a laugh in the corners, too. Surprisingly grown-up, all-independent suspension equips the Beat with a more advanced chassis than your average city car. And with its mid-engined balance, this means it’s a joy to fling here there and everywhere, safe in the knowledge that if you get carried away and overdo it, the limits are stifled safely by slender rubber. Unequal rubber, too, like a supercar, with 155/65 13-inch tyres at the front and 165/60 14-inch at the rear.

Finding parts for the Beat can be an issue. You can buy reasonably priced panels direct from Japan and, not so long ago, Honda announced it would be reproducing a raft of hitherto unavailable parts. However, with most of the bits coming overnight from Japan, there’s the shipping time and duty implications to consider.

The other thing is practicality. The Beat makes the MX-5 look like a roomy grand tourer for two people and a kitchen sink. This car’s tiny dimensions mean you’ll probably want to be in a touchy-feely relationship with whomever is sitting alongside you: because touching and feeling, intentionally or otherwise, will be quite the norm in this narrow, confined cockpit. And the boot is tiny. Nearly half of it is taken up by the battery – that’s how small it is.

Beyond those considerations, why not consider this Honda Beat? If you’re after something small and convertibley that isn’t an MX-5, this is, and it’s not one of those. And think about it: we’re always moaning that cars are getting too powerful, too heavy, too grippy and too complicated. Well, the littlest Honda is the complete antithesis of all those things. So even though it’s not actually that fast, should still make your heartbeat faster.