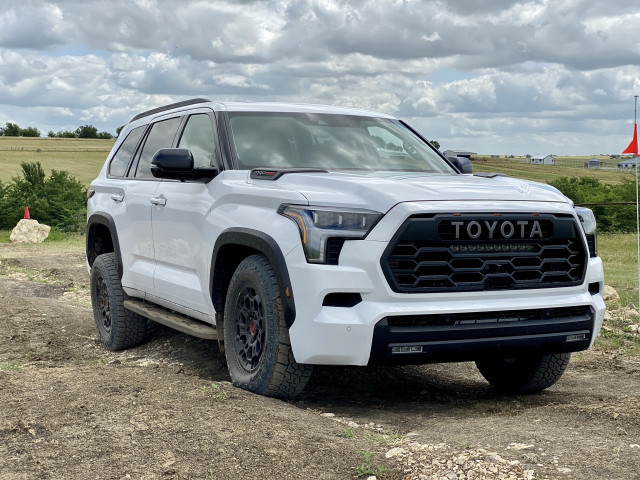 The full-size SUV accomplishes a singular feat unmatched by any other automotive segment. It can transport a hockey team’s starting line and their gear in relative comfort, as long as you’re wearing nose plugs.

The large truck-based SUVs that seat up to nine passengers are known for their roomy utility as much as their poor fuel economy. The redesigned 2023 Toyota Sequoia counters that last point with a standard hybrid powertrain nearly 50% more efficient than the V-8 it replaces. Is it enough to overcome the segment’s bestseller, the larger, roomier, and more versatile 2023 Chevrolet Tahoe?

Here’s how the two squads face off. 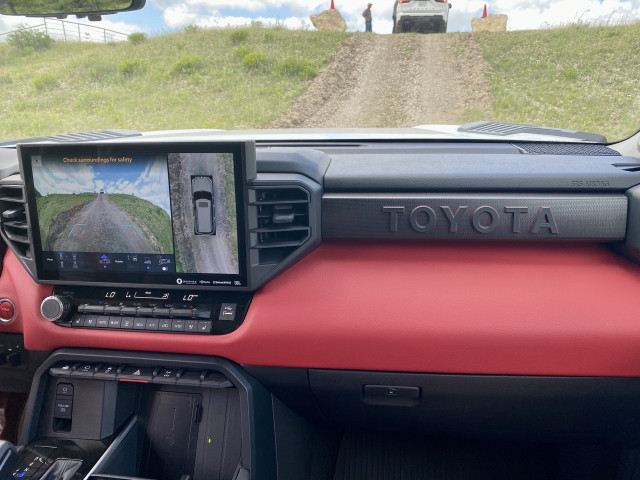 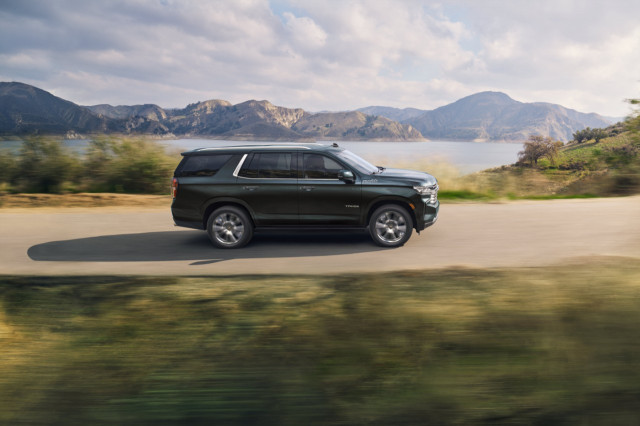 The Sequoia looks newer but the Tahoe appears more timeless in its big box shape. Both models embrace the design cues of the full-size pickup trucks with which they share a platform, with broad vertical grilles and jar-head sides.

The Sequoia wears the same corner brace LED headlights as the Tundra, and it also has the same narrow windshield that squeezes outward vision once inside. In the cabin, the horizontal blockiness carries over across the dash, with vents like ears flanking a 14.0-inch touchscreen on most grades.

Gratefully, and maybe even gracefully, both models have climate control dials and multimedia buttons so you don’t have to rely on the touchscreen for everyday functions.

Most Tahoes feature a 10.2-inch touchscreen with a vertical gear panel on the left side. It’s a no-frills arrangement, much like the Silverado pickup, until you get to top trims like High Country that summit Denali and Cadillac territory. Outside, the Tahoe can ride on 22-inch wheels that make the sharp horizontal bands on its steep face even more imposing in rear-view mirrors. The rear end is more unified than the Sequoia’s, even with its shark fin cover behind the rear door pillars. The Sequoia’s roofline dips and juts down to the windows like a staircase in a fun house. The proportions of both models preclude them from being attractive, but the Tahoe is more whole. 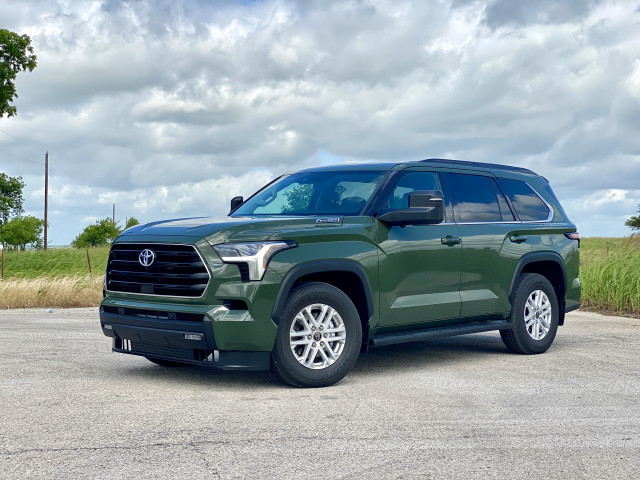 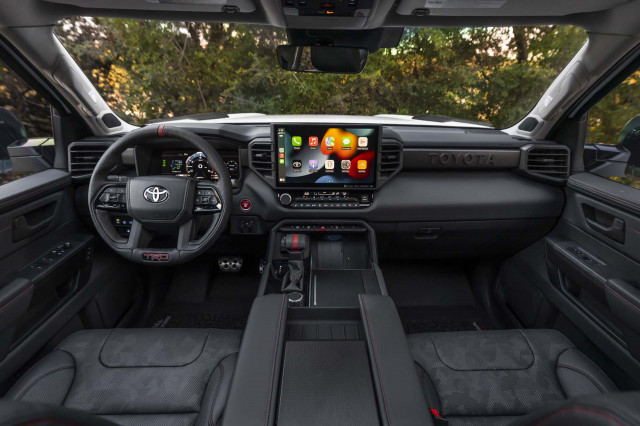 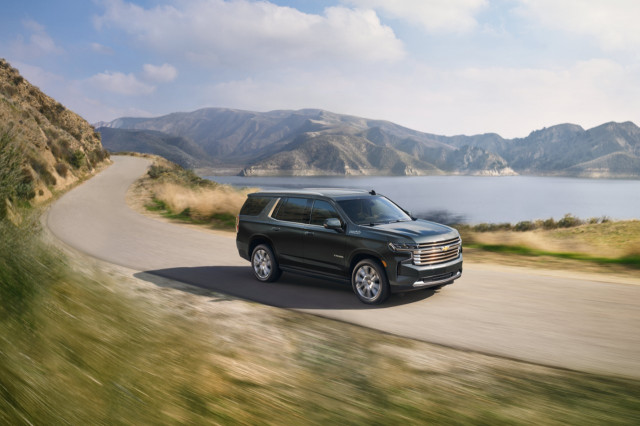 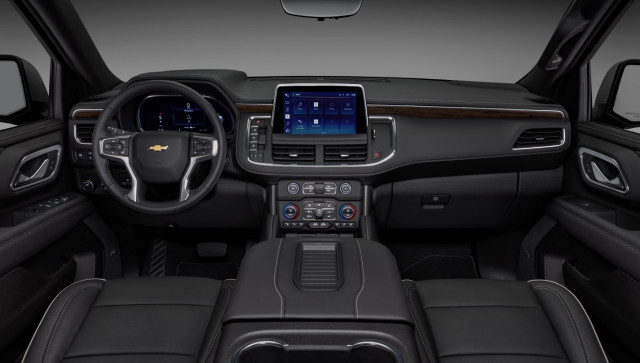 Sharing a hybrid engine with the 2022 Toyota Tundra full-size pickup truck, the 2023 Sequoia uses a 3.5-liter twin-turbo V-6 hybrid powertrain that makes 437 hp and 583 lb-ft of torque. Standard. A motor generator sits between the engine and 10-speed automatic transmission for low-speed EV driving below 18 mph. More spirited off the line and while passing, the hybrid V-6 also rides quieter than the old 5.7-liter V-8, giving the Sequoia a sense of refinement it lacked before. That’s enhanced by an independent front suspension and a solid rear axle with coil-over rear springs and an available air suspension that keeps it from handling as rough and tumble as a truck.  The Sequoia can tow up to 9,520 lb, but it’s not as smooth or confident as the Tahoe and its 8,400-lb tow rating.

The Tahoe’s best version slaps with a 6.2-liter V-8 that makes 420 hp and 460 lb-ft and can hustle the land barge to 60 mph in the mid seven-second range. Any of the three Tahoe engines pair with a seamless 10-speed automatic that’s almost telepathic, but a heavy foot keeps it in low gears until it howls approaching the red line. Chevy fits the Tahoe with a fully independent suspension that counteracts the SUV’s prodigious weight to make it feel lighter and more agile. The available magnetic ride control dampers smother road imperfections even better, and an available air suspension can raise or lower the big rig by nearly four inches.

For the less price-sensitive shopper, the Tahoe’s expensive tricks give it dirty dangles and deke the Sequoia for the goal. 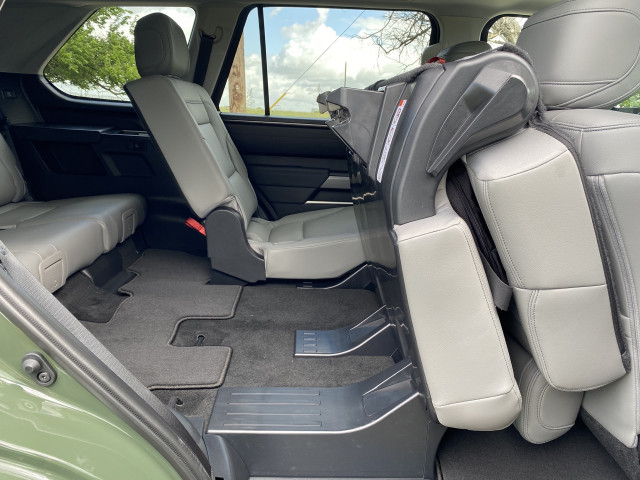 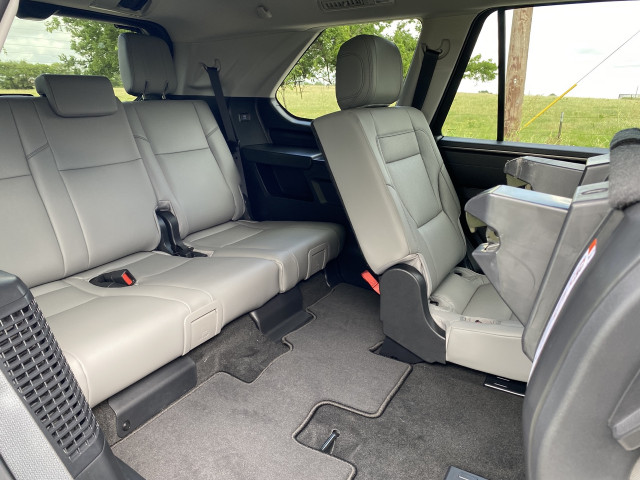 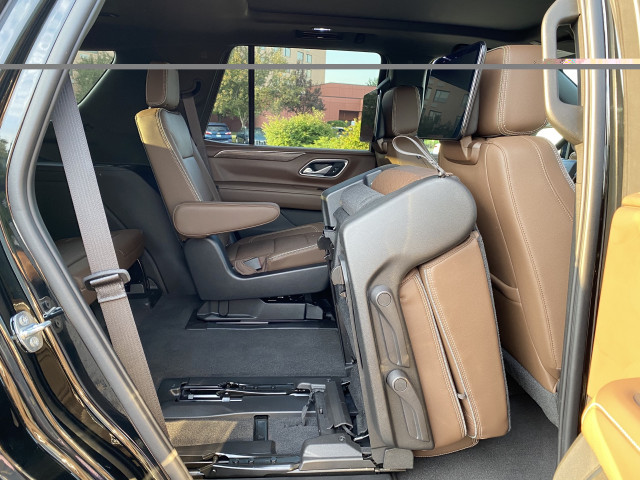 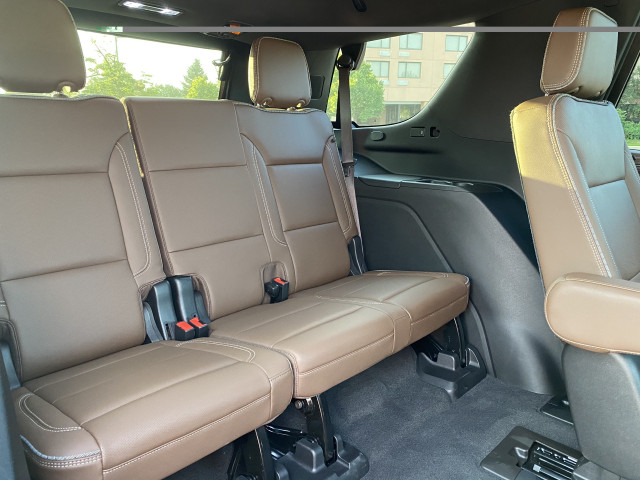 While fuel efficiency might be the Sequoia’s best move, it can’t measure up to the economy of space in the Tahoe. And the two are related.

The Sequoia’s hybrid battery pack sits below the third row seat, designed so that more high traffic areas around the second row would be easier to navigate. Because of this packaging, the second row doesn’t slide, but the third row does. Head and leg room get squeezed back there to prohibit adults, and cargo room behind the third row measures out to only 11.5 cubic feet. Not even goalie gear would fit back there.

The Tahoe has 25.5 cubic feet of space behind its third row, and adults can functionally sit in the wayback with 34.9 inches of rear leg room, which is as much space as the second row of many compact crossovers. Both models offer three seats in the back, and the second-row bench can be swapped out for captain’s chairs, but only the Tahoe offers a front-row bench to enable a van-like arrangement of nine seats. It’s a rare setup, but it underscores the point that there’s more room in every row in the Tahoe. 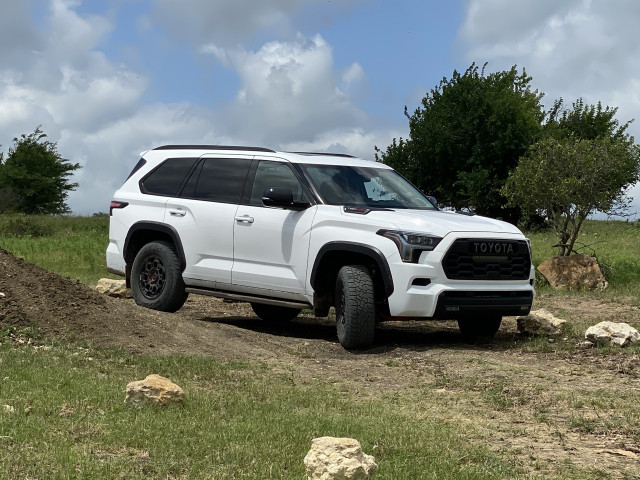 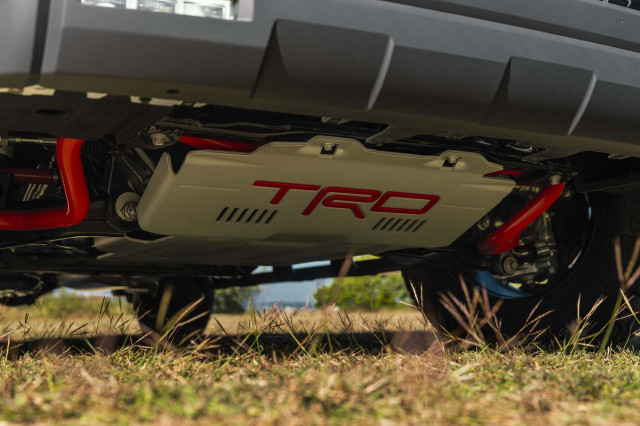 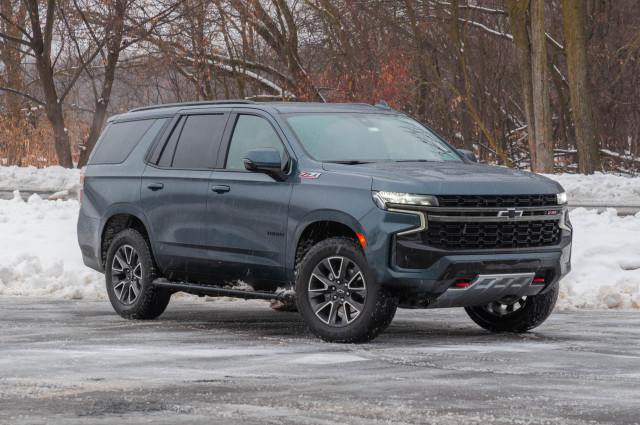 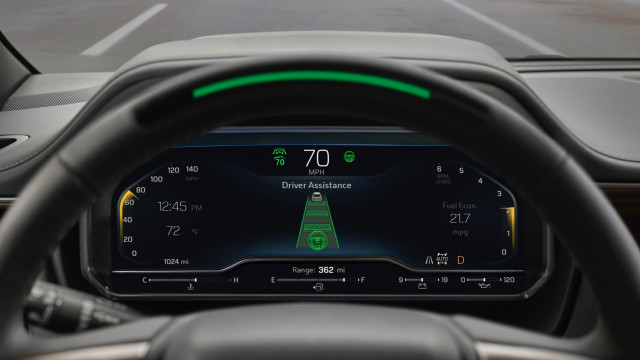 Even though they lack official crash-test ratings, both models come well equipped with driver-assist features meant to avoid or mitigate the impacts of a crash. Automatic emergency braking with pedestrian and cyclist detection, active lane control, and blind-spot monitors are standard on both, but Toyota adds adaptive cruise control, front and rear park assist, and a standard surround-view camera system that is crucial for a vehicle with such thick rear pillars. Headrests—and heads—in the rear view mirror can stick out like a game of whack-a-mole. The Tahoe can be fitted with Super Cruise limited hands-free driving system, which gives a welcome assist on road trips.

The Sequoia comes with better standard features, including a sunroof, power and heated front seats, a 12.3-inch digital instrument cluster, wireless smartphone compatibility, and a 14.0-inch touchscreen on all but the base SR5. The voice commands and infotainment system are almost as good as GM’s, which is a huge step for Toyota, but the base SR5 with its 8.0-inch touchscreen costs $62,795 with 4WD.

The base Tahoe starts cheaper at about $54,000, but the LT model with 4WD matches the price of the base Sequoia and adds a 10.2-inch touchscreen, Bose audio, and leather upholstery. The Tahoe comes with many more options as well, which ultimately gives it the edge here. 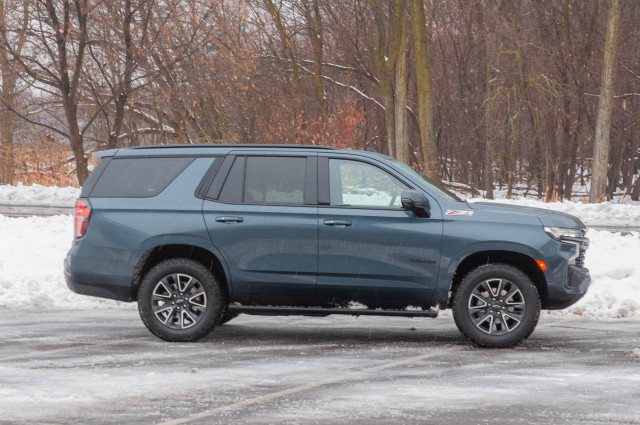 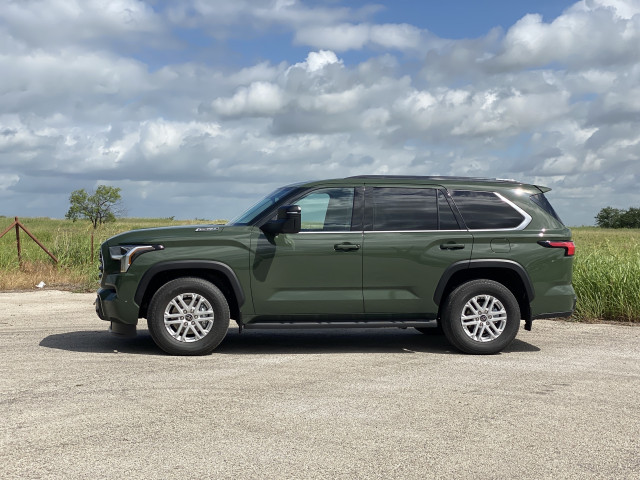 The winner, in a shootout: Chevy Tahoe

From design to execution, the Tahoe presents a more well-rounded case and excels at what the full-size SUV is meant to do by offering tons of passenger and cargo room. That’s why it earns a superior TCC Rating of 6.4 out of 10. But the Sequoia’s hybrid powertrain, with its balance of power and efficiency, is right there with a TCC Rating of 6.2 out of 10. It all comes down to which team you root for most, space or efficiency.