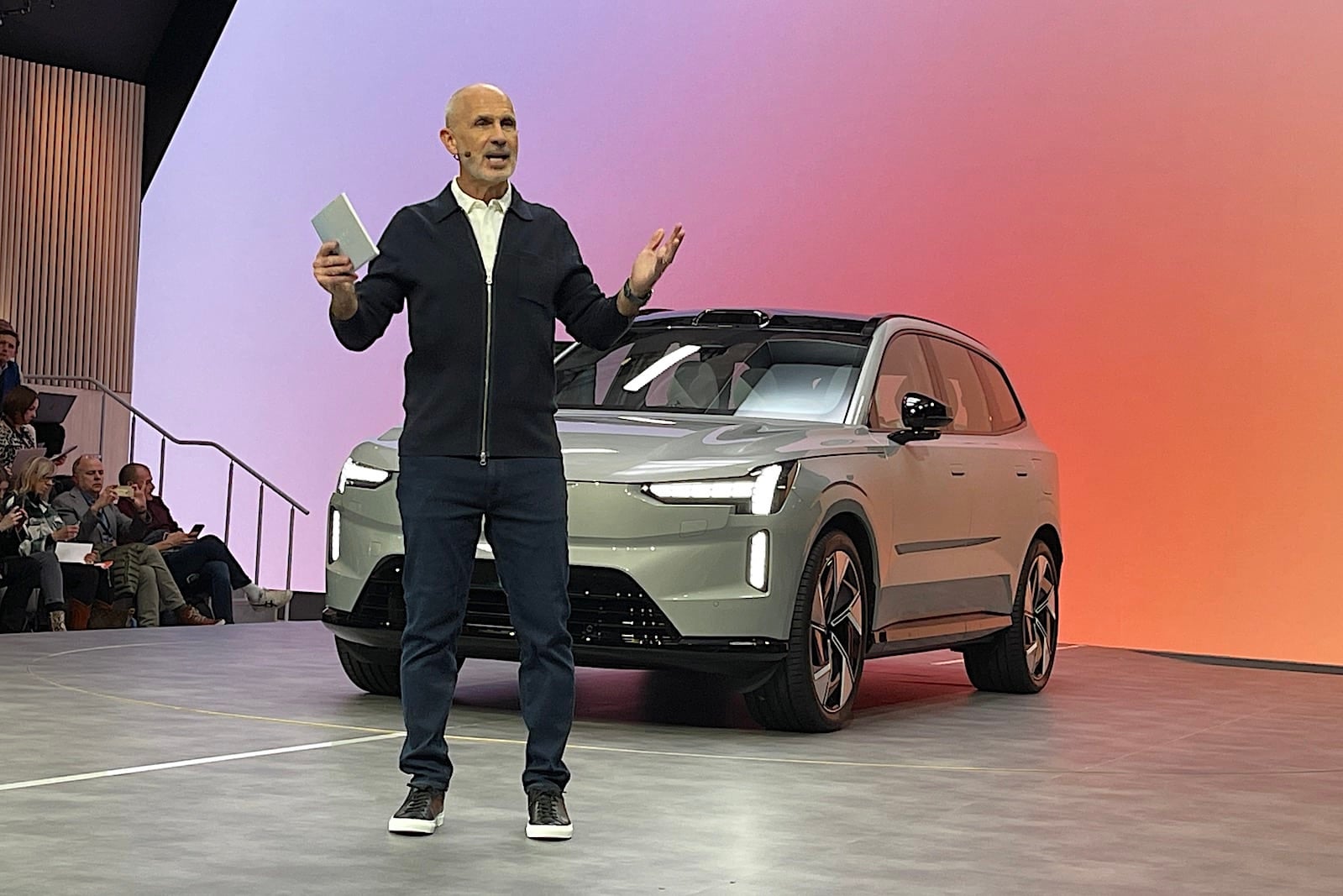 (Editor’s note: This story has been updated with new information secured after the reveal of the vehicle.)

Volvo is no newcomer to electrification. It already offers an assortment of plug-in hybrids and battery-electric vehicles like the C40 Recharge. But those have only been the appetizers, if you will, as the main course made its debut Wednesday in Stockholm.

The 2024 Volvo EX90 launches a “new era,” the automaker said during a well-attended preview in Sweden’s capital city. It uses an all-new drivetrain, as well as a completely new platform that will serve as the foundation of a growing line-up of battery-electric vehicles to come.

“The Volvo EX90 is a statement for where we are, and where we are going,” said Volvo Cars CEO Jim Rowan, during the debut of the new model in Stockholm on Wednesday. He later told TheDetroitBureau.com “By the end of the decade we will be only an electric car company.

The new model said Rowan, is “designed to further raise our safety standards, the first Volvo car to be truly defined by its software and part of a wider ecosystem, connecting to your home and your other devices. The Volvo EX90 is the start of something new for Volvo Cars in many ways.”

Volvo has made a deep commitment to going all-electric, Rowan’s predecessor, Håkan Samuelsson, announcing in 2030 a plan to eliminate internal combustion technology — including plug-in hybrids — by 2030. It’s already begun that transition, the C40 Recharge the latest example.

But the arrival of EX90 marks an important transition. Prior EVs relied on platforms capable of sharing a mix of powertrain technologies. The SPA2 “architecture” underpinning the new SUV flagship was designed solely to run on batteries. The pack, as well as its motors, are mounted under the load floor.

That approach has a number of advantages from a cost and manufacturing standpoint. It also yields a lower center of gravity and frees up space in what had been an engine compartment to be repurposed for passengers and cargo. Notably, there is now a modest-sized “frunk,” or front trunk, under the hood.

Eventually, the Volvo EX90 will be offered with a variety of different powertrain configurations — much like the current XC90 crossover it eventually will replace. For 2024, however, it will come to market with a single option: a twin-motor all-wheel-drive package. Together, the performance version of the system produces 496 horsepower and 671 pound-feet of torque. The standard powertrain comes in at just 408 hp, which is comparable to the XC90 with the Twin-Hybrid plug-in drivetrain and its 400 hp and 472 lb-ft.

The SPA2 chassis is a modular design that can be stretched, widened and adjusted in height depending upon its application. Underpinning the EX90 it will offer enough space to squeeze in a 111 kilowatt-hour lithium-ion battery. Volvo has released only a modicum of details about the new EV, including range, the automaker suggesting it should deliver about 300 miles per charge.

It’s uncertain whether the electrical architecture uses 400 or 800 volts. But when it runs low on battery an owner will be able to plug into a high-speed public charger to go from a 10% to 80% state-of-charge in as little as 30 minutes, the automaker did confirm. Considering the size of the pack, and comparing it to other current EVs, TheDetroitBureau.com estimates it will take about 10 hours for a fully drained battery to reach 100% using a Level 2 240-volt home charging system. Rowan told TheDetroitBureau.com later the EX90 traveled 600 km, or about 370 miles, on a charge using the European WLTP standard. U.S. EPA range is closer to 300 to 310 miles.

Volvo has long built its brand on a reputation for safety. It likes to point out it developed the life-saving three-point seatbelt and has introduced a variety of other safety breakthroughs. It isn’t forgetting that heritage as it goes electric. Looking forward, Volvo aims to sharply reduce the number of crashes, deaths and serious injuries involving its vehicles.

One of the key moves comes with the introduction of lidar on the Volvo EX90. It’s a high-resolution laser technology that can peer out as far as 800 feet down the road to give both driver and smart safety systems some extra time to respond to a potential emergency. That’s equivalent to 7.5 seconds moving at 60 mph.

Lidar won’t do it alone, of course. It becomes part of a “sensor fusion” that also makes use of cameras, radar and sonar. In fact, there are 16 radar sensors, eight ultrasonics and five cameras joining the lidar sensor mounted in the roof of the ute, just above the windshield, where it is most effective, Rowan said.

“All of these work together to form an invisible shield of safety,” he said, adding the company expects to reduce serious accidents involving its vehicles by at least 20 percent.

While Volvo didn’t specifically address the topic on Wednesday, the automaker is expected to introduce a more advanced, Level 2+ hands-free driving system at some point. That should come as no surprise considering General Motors’ rapid rollout of its own Super Cruise system — with Ford, Nissan and, soon, BMW offering similar technology. Lidar should add another advantage.

While most of the sensors will peer outside the vehicle, Volvo also has added twin cameras inside the cabin to monitor driver behavior. Should they sense the driver is distracted or, worse, incapacitated, the system will be able to sound alert and even take over, slowing to a stop and calling for emergency assistance.

Volvo has partnered with Qualcomm and NVIDIA to develop the underlying technology in the 2024 EX90. Another high-tech partner is Google which has completed a major redesign of the balky and complicated infotainment system Volvo currently uses.

Slipping inside the vehicle, a motorist will note twin digital screens, one replacing conventional gauges, while a 14.5-inch vertically oriented infotainment touchscreen takes control of virtually all vehicle functions. It now uses Google maps and apps and, the partners claim, is quicker and simpler to operate.

Technology will be critical to the Volvo experience now with Google voice assistant being available. Additionally, it will feature a smartphone-as-a-key system sensing the driver starting at about 10 meters away. As become the focus for many automakers these days, Volvo’s implementing a radar sensing system for passengers that is sensitive enough to detect a baby breathing under a blanket.

Likewise, the exterior won’t come as a shock to those familiar with the current version of Volvo’s SUV flagship. The overall shape is similar, with the EX90 getting a gentle roll to the roofline and adding some obvious details — such as the completely sealed grille — to enhance aerodynamics. Reducing drag is one of the best ways to improve range and performance.

It sticks to Volvo’s relatively conservative design philosophy, an intentional move, according to Robin Page, global chief designer, who noted the move to “not go too crazy” is to appeal to first-time EV buyers.

As time goes on, Page noted, then “we can be more playful” with future models. However, that not say there were no alterations. The team moved the cowl and firewall a bit forward and pushing the wheels out more to the corners to allow for more interior space.

What motorists won’t see is how Volvo has made another important effort to reduce the EX90’s environmental footprint. About 15% of its steel and 25% of its aluminum come from recycled sources — as do 105 pounds of the crossover’s plastics.

As has become something of an industry norm these days with battery-electric vehicles, Volvo is showing off the new EX90 well ahead of its actual on-sale date in early 2024. But it now is taking advanced reservations, with those buyers who want to follow through expected to spec out their vehicles by autumn 2023.

Volvo plans to build the all-electric crossover at its plant in Ridgeville, South Carolina.

With the current challenge with inflation, it’s probably no surprise that final pricing for the 2024 Volvo EX90 hasn’t yet been released. The automaker only says that a “well-equipped” version should come in “under $80,000.” The current starting price for the plug-in hybrid XC90 is $69,750 and can push well into the $70,000 range when fully loaded.