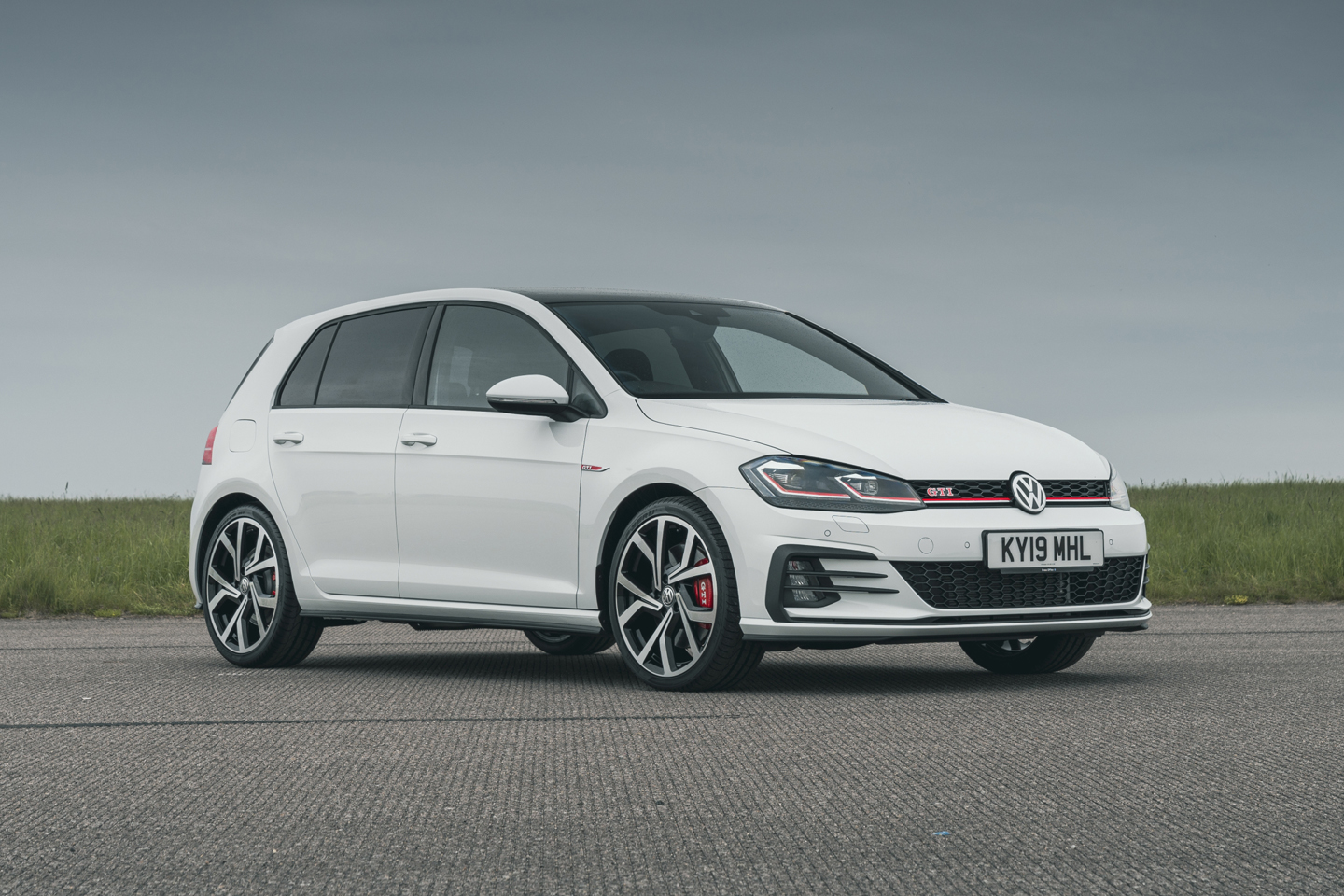 It is telling of course that the chief joy of getting back in the Mk7 Golf GTI is just sitting in it, gleefully operating the major controls. Believe it or not, the car was not exactly feted for its canny layout of dials and switchgear in its day; it was just widely acknowledged that Volkswagen had landed on an ergonomically pleasing way of doing things, which meant that people (i.e. road testers) didn’t object to spending untold hours behind the wheel. That its replacement has hoisted the Mk7’s cabin onto a pedestal probably says as much about its own weaknesses as it does its predecessor’s strengths – but the effect is undeniable. Someone with much better things to do might easily be tempted to sit twirling the heater knob in something like reverential amazement.

Naturally, people found other faults with the Mk7 GTI at launch. Your correspondent recalls the car placing third in the class at a previous magazine title, and being a loud proponent of a running order that judged the Megane RS 265 and Ford Focus ST superior. The logic was unimpeachable: both were handily cheaper, and would do things on the limit that no chassis engineer would ever dream of instilling into Volkswagen’s money-maker. The Mk7 was commendable, no question about it – but it was also thought staid and absolutely guilty of falling too close to the tree. After all, the Mk6 had been worthy and generally likeable, too. Where was the glint in its eye?

A decade later, it’s fair to say some of those allegations can now be set aside, or at the very least reclassified under the heading ‘unreasonable expectations’. As the later Clubsport S proved, Volkswagen could deliver a more spirited Golf if it so desired; the Mk7 GTI’s handling dynamic wasn’t chosen to set your hair on fire, it was meant to synchronise with people’s expectations – and in being safe and accurate and very amenable, it did its job. Much like the Range Rover or the BMW 3 Series or the Porsche 911, the model’s success hinged on it seeming, above all else, Golf-like. Improved, sure. It had a shiny new platform, for one thing. But gradual, thoughtful evolution has always been favoured in Volkswagen’s standard-bearer. 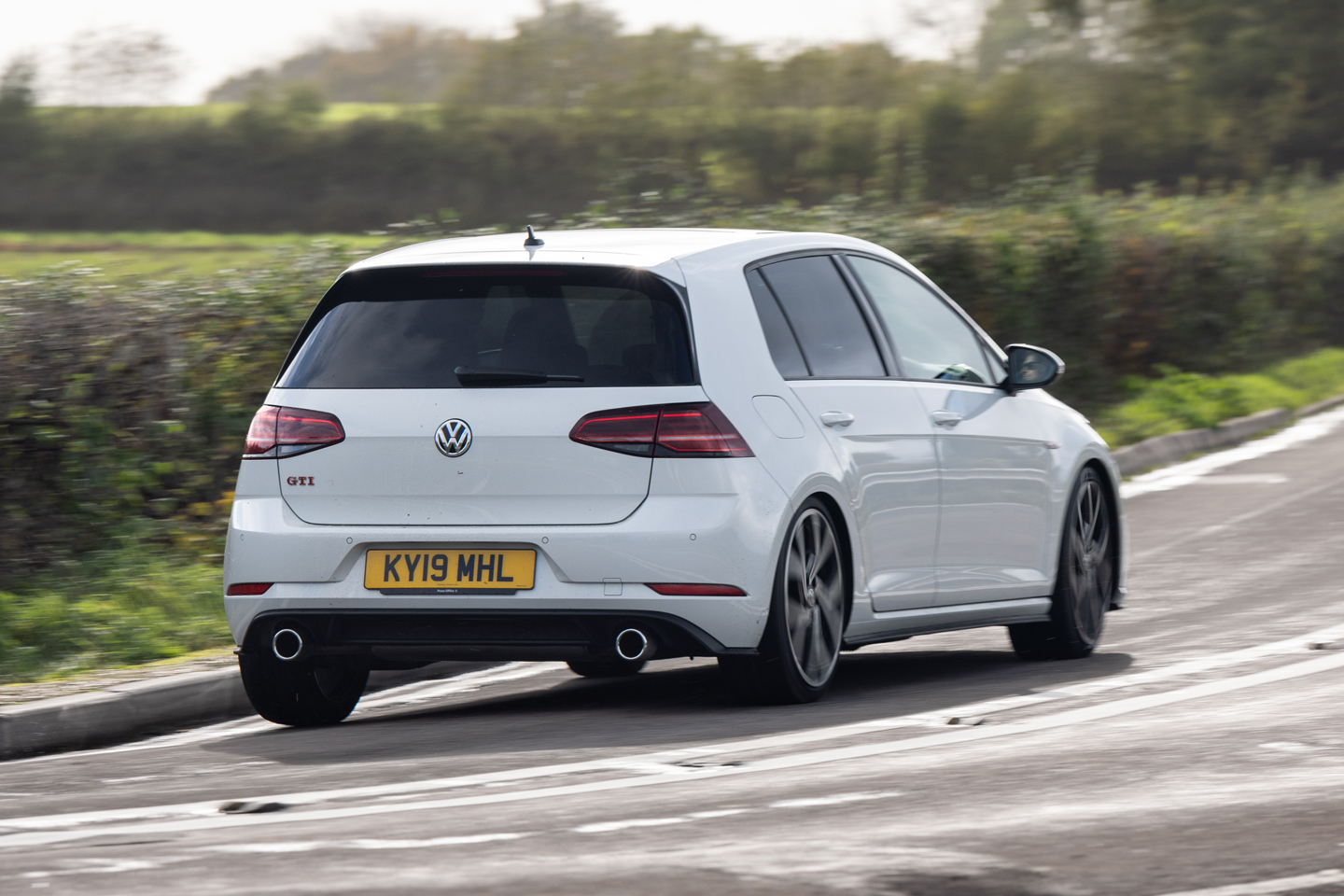 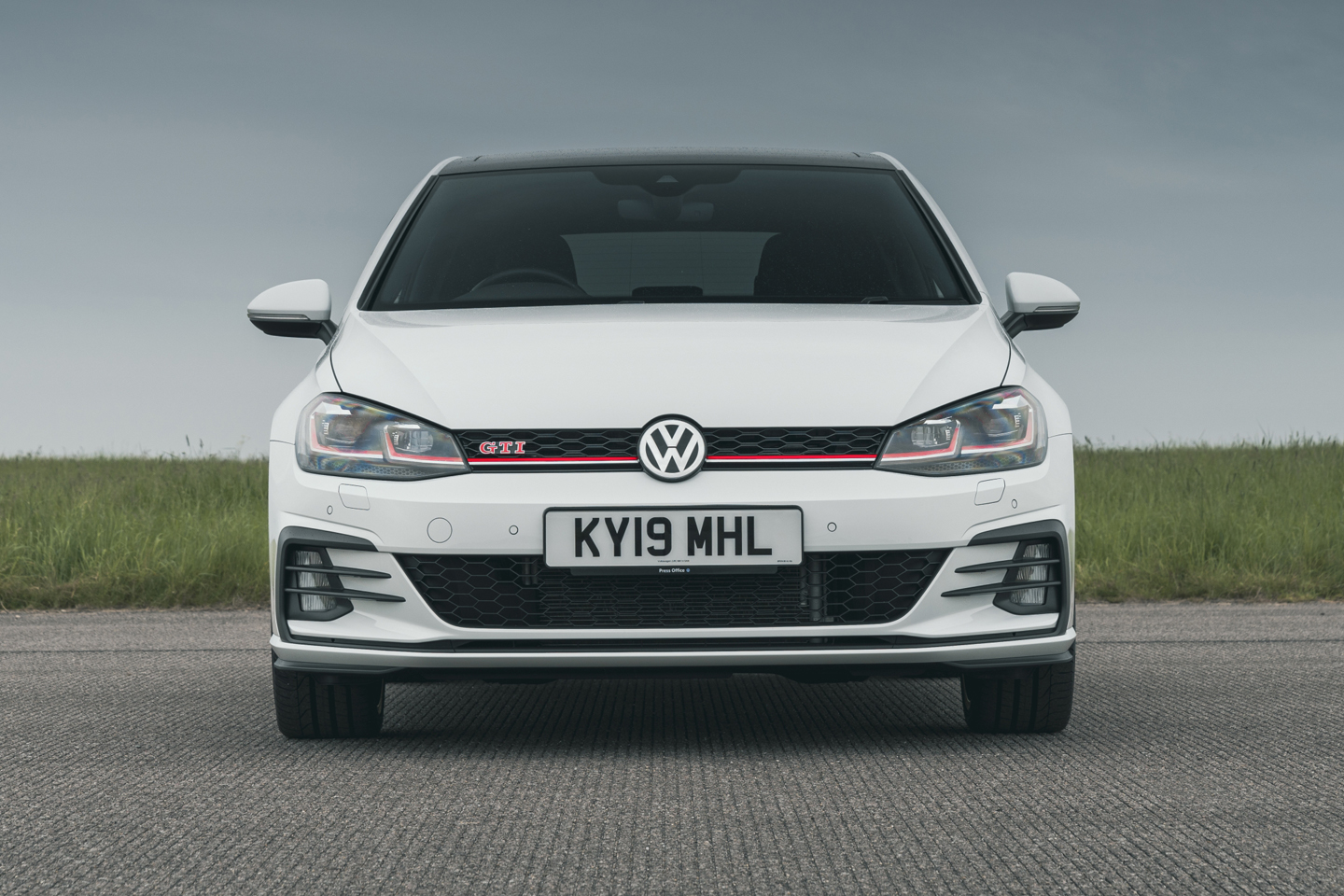 The drawbacks of revolution are exemplified by the Mk8’s now infamous interior choices. Much like ripping out someone’s front room, you better be sure that what you’re replacing it with is of a superior standard. Sadly, its maker fell at both qualitative hurdles: the current model is not just less satisfying to interact with thanks to its clunky infotainment and weirdly haphazard switchgear, it is also less pleasing to look at. And the appeal of the famously classless GTI has always been one part function, two parts form. Accordingly, it’s now very easy to regard the previous model – especially in facelifted, Mk7.5 format – as peak Golf.

In this regard, Volkswagen has chosen well when it came to the business of preserving a single car for posterity. Its heritage fleet is famous for including a version of every preceding GTI generation, and the ’19 plate, five-door Performance model – with the Dynamic Chassis Control, panoramic sunroof and 19-inch ‘Brescia’ wheels optioned – exemplifies the Mk7’s established strengths. We’re fairly sure the car is the first GTI retained with a DSG; sacrilege for some perhaps, but the automatic easily outsold the manual in period, and it speaks to the model’s reputation for ease of use. (Plus Volkswagen UK has taken the precaution of hanging onto its Clubsport S press car as well, so it arguably has all the bases covered.)

For the record, the car still looks the part. Granted, it’s only been off sale for two years – and its successor has retained the same basic proportions – but, much like the cabin, there’s a cohesiveness to the Mk7’s design that suggests it might eventually be considered timeless in the same way the Mk1 and Mk2 (and possibly the Mk5) are. Given it was launched in the same year as the anointed heritage car, it is conceivable that Volkswagen might have chosen to preserve the run-out TCR variant, a predictably gutsier take on the GTI, and ritzier, too, thanks to a motorsport-inspired aero kit. But the run-out model is rare and already half-forgotten; better to keep the much bigger selling and characteristically subdued Performance grade. 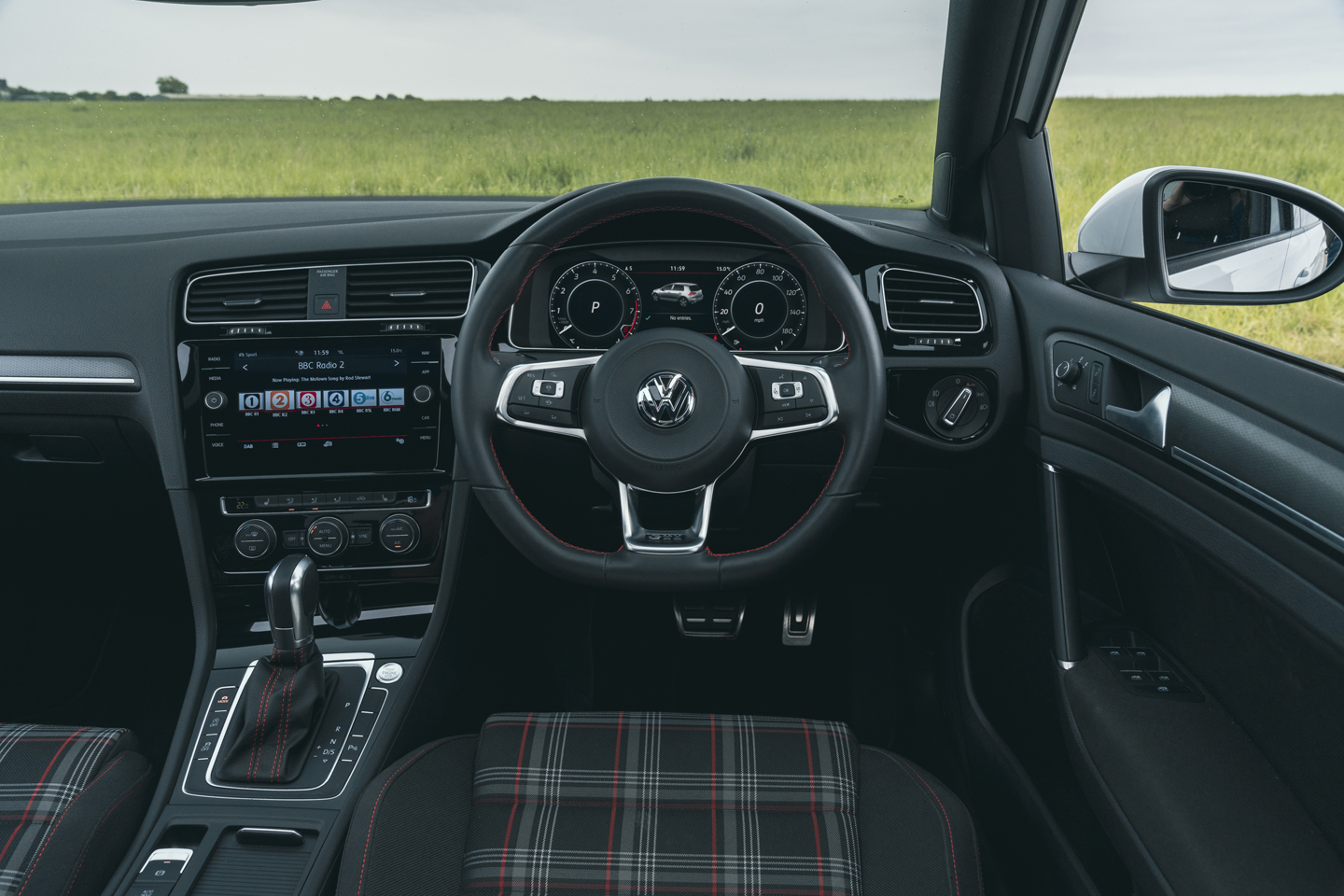 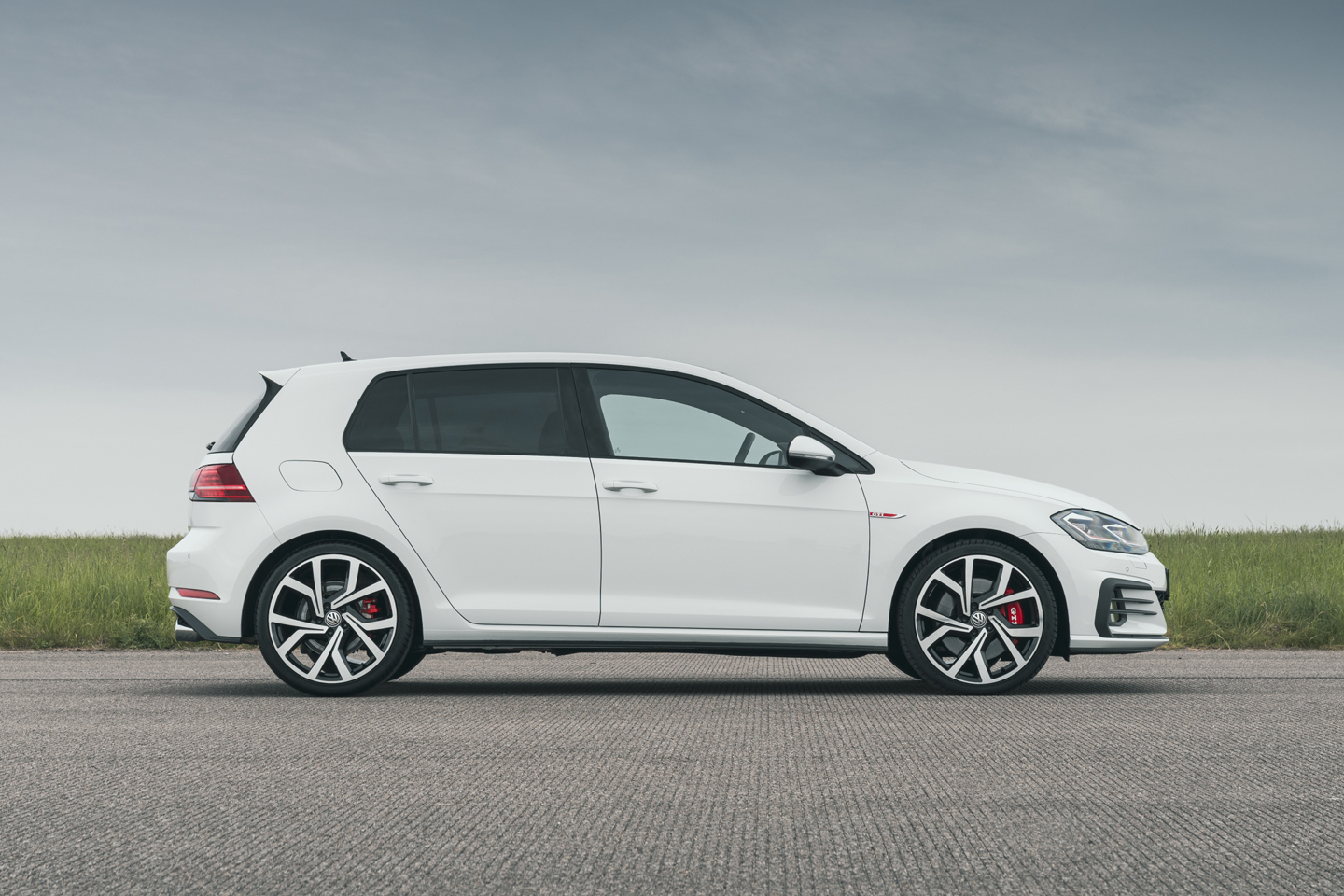 Initially, ‘Performance’ was there to distinguish the more powerful GTI from an entry-level model that Volkswagen eventually binned off in 2018. By then it had earned a modest upgrade to 230hp, while the Performance trim ended its life with 245hp (compared with 290hp in the TCR and 310hp in the earlier Clubsport S). Some regarded the TCR as a late-in-life attempt to return the Golf to the top of the hot hatch pecking order after more than one rival – Hyundai among them – deliberately sought to outgun the GTI on paper. But for anyone unconvinced by the car’s performance, Volkswagen could always point to the punchier and hugely popular all-wheel-drive R (also the glass ceiling for its sibling’s output) and proved itself resolutely attached to a mid-tier power figure.

Driven today, it’s easy to buy into the logic. High-rev fireworks are no more the Golf’s bag than a tail-wagging chassis. The onus is on responsive, free-flowing progress, and the GTI delivers this in spades. Against most backdrops, the four-cylinder EA888 is less concerned with its peak output than the 273lb ft plateau which arrives at 1,600rpm and remains steadfastly available till 4,300rpm. Leave the transmission to its own devices, and virtually all the heavy lifting will be done in the mid-range. Chances are you won’t mind one bit: generally speaking, the DSG is too slick and speed too easily won to mount a counterargument to the car’s obvious convenience. It’s like complaining about contactless payments.

It helps that car around it is the automotive equivalent of Baby Bear’s porridge. Any firmer and it would risk seeming too hot for the casual user; any softer and it would almost certainly leave you cold. The ‘comfort’ setting on the adaptive dampers tends to feel just right on the vast majority of UK roads, while leaving just enough leeway in the body control for ‘sport’ to seem worthy of the description when trying a bit harder. The GTI’s steering is no more interactive than it seemed ten years ago; nevertheless, it is credibly weighted and reassuringly direct. This, together with a stability bias obviously inclined toward sure-footedness, makes the fast Golf a cinch to drive fast. 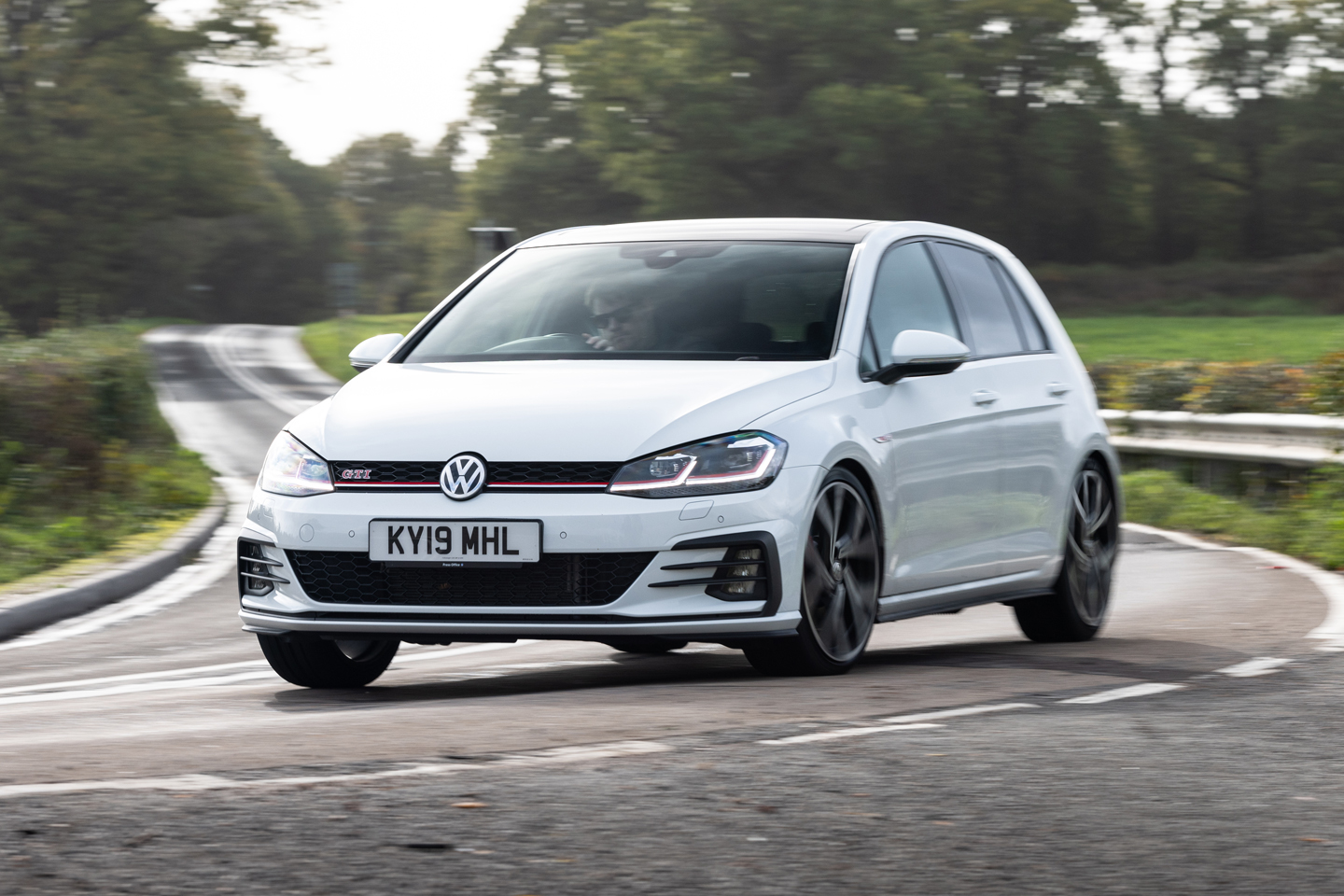 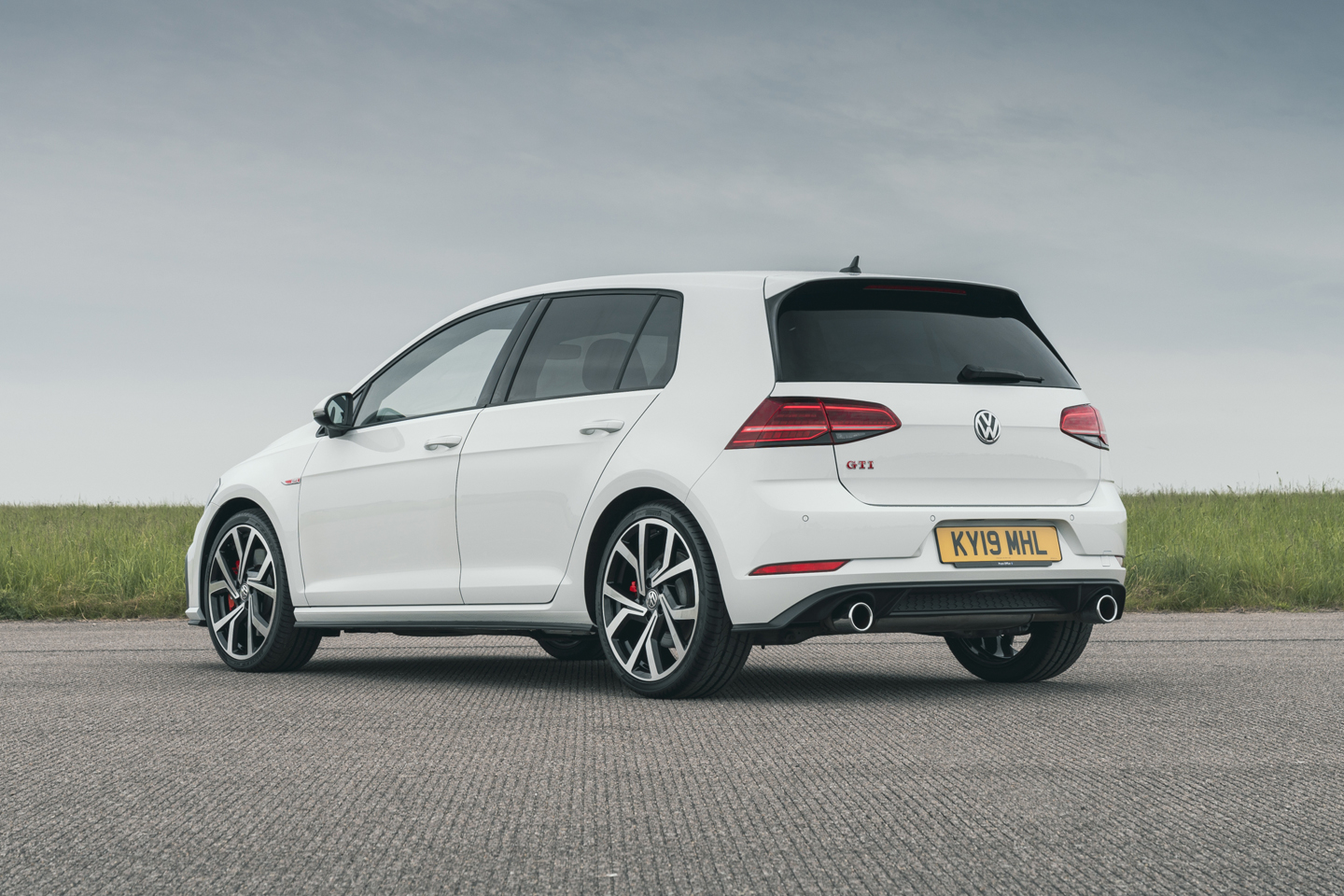 Same as it ever was, right? Yet the Mk7 has it down to an unarguable fine art. Ultimately, its performance and handling are no less joined up than its styling or interior. The car exudes purposefulness and proficiency, and it is no coincidence that those aspects are front of mind when you’re behind the wheel. But Volkswagen’s masterstroke is to make all this buttoned-down predictability and convenience seem not just persuasive in a real-world usability sense, but aspirational too. So while the motoring press raved about the objective superiority of the Renault Megane RS or Honda Civic Type R, people bought a Mk7 GTI because, in its seriousness and implied maturity, it said all the right things about them.

This feel-good approach has never made for the most exciting hot hatch to drive, yet as a Swiss Army knife solution to modern motoring – with all its status-affirming peccadilloes – the Golf stands apart not just as an icon in the segment it started, but also as a byword for level-headedness among all performance car purchases. Of course, the model has suffered duff generations before, and its reputation is merely dented by the Mk8’s tediousness rather than ruined by it. But while we wait for its maker to iterate its way out of trouble again, the current car’s immediate predecessor is still the GTI we’d recommend buying – and that makes the Mk7.5 version a bonafide PH Hero for way more than just its heater knob.