The Quickest-Selling Cars in Today’s Market 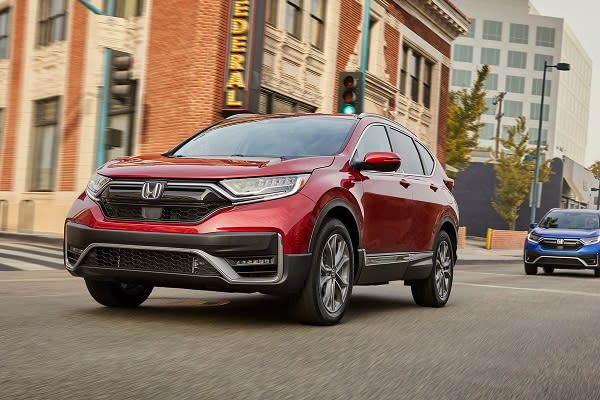 The latest iSeeCars.com analysis found the fastest-selling new car during the month of March was the Honda CR-V, while Toyota is the most-represented automaker on the list. The fastest-selling used car is the Tesla Model X, topping a list that is dominated by alternative-fuel vehicles.

“While used car prices saw slight declines in March over February, they are still well above average, while other economic factors like inflation and high gasoline prices slowed the demand for used cars during what is typically a high-volume sales month,” said iSeeCars Executive Analyst Karl Brauer. “Inventory constraints have persisted for new cars due to supply chain issues in Asia and Europe, and the new car market is struggling to keep up with pent-up demand.”

“The surge in gas prices has heightened the demand for fuel-efficient vehicles, which include small SUVs, sedans, and hybrids,” said Brauer.

The fastest-selling new vehicle is the Honda CR-V compact SUV, which spends an average of 7.6 days on dealer lots. “Honda is among the automakers that have the tightest inventory, and sales of the CR-V in the first quarter decreased by 37.5 percent compared to the previous year due to supply constraints,” said Brauer. “The demand for the popular small crossover is likely exacerbated by high gas prices as demand outpaces supply.”

Three Hyundai vehicles and one from its luxury Genesis division make the list, including the Genesis GV70 compact SUV, the Hyundai Tucson compact SUV, the Hyundai Elantra hybrid compact sedan, and its non-hybrid counterpart. “The Genesis GV70 is an all-new model for 2022, and its soaring demand has made it one of the new cars priced the highest over MSRP,” said Brauer. “Meanwhile, Hyundai reported a decrease in inventory for March over February while demand increased for these fuel-efficient models.”

Three small Subaru SUVs make the list, including the Forester compact SUV, the Crosstrek subcompact SUV and the Outback compact sports wagon. “Limited inventory of Subaru models led to a 34.1 percent reduction in sales in March compared to 2021,” said Brauer. “Both the Crosstrek and Forester were refreshed for 2022, and dealers have limited inventory of these popular models, forcing them to pause orders of the Forester to help stabilize inventory.”

Two recently-released Ford vehicles make the list including the hybrid version of the Ford Maverick compact pickup truck and the Ford Bronco compact off-road SUV. “The Ford Maverick and the Ford Bronco are in such high demand that dealerships stopped taking retail orders for the vehicles for the 2022 model year, and the limited versions on dealer lots are commanding a premium over MSRP,” said Brauer. “The demand for the Maverick represents the public’s fervor for the newly created compact pickup truck segment, which provides the function of pickup at a more affordable price, while offering excellent fuel efficiency.”

Two BMW SUVs round out the list: the compact BMW X3 and the midsize BMW X5. “BMW’s sales rose by 3.2 percent in the first quarter of 2022, while overall luxury vehicle sales declined by 10 percent,” said Brauer. “BMWs X model SUVs comprise more than half of the brand’s sales, and demand for these vehicles soared while inventory remained lean.”

The fastest-selling used vehicle is the Tesla Model X electric crossover, which takes an average 28.0 days to sell. It’s joined by three additional Tesla Models, the Model Y, the Model S, and the Model 3. “The earliest delivery time for a new Tesla Model X is December 2022 for the base model and August 2022 for the high-performance Plaid version, which is further elevating the demand for the used versions,” said Brauer. “All Tesla vehicles have long waitlists for their new versions, and used versions of the highly-anticipated Tesla Model Y are just entering the used car marketplace,” said Brauer.

Four luxury vehicles make the list including the Audi Q7 midsize SUV, the Jaguar XE compact car, the Audi Q3 subcompact SUV, and the Audi A6 midsize car. “Demand for small luxury SUVs and luxury sedans has increased in the wake of high gas prices, which has increased the demand for these vehicles,” said Brauer.

Two sedans round out the list: the Kia K5 midsize sedan and the Mazda MAZDA3 compact car. “The Kia K5 was new for the 2021 model year, and demand for new versions has steadily risen, causing new models to be consistently priced above MSRP,” said Brauer. “With an average price of $25,157 the Mazda Mazda3 is popular with shoppers who want a relatively affordable and fuel-efficient used car amid current used car price hikes.”

“New car inventory is expected to remain tight for at least the beginning of 2022 as automakers struggle to meet pent-up demand, especially with popular vehicles,” said Brauer. “New and used car shoppers should act quickly if they see their desired vehicle for sale, and buyers will likely need to be flexible on color and trim options for in-demand models.”

iSeeCars.com analyzed over 150,000 new and used car sales (model years 2016-2020 for used cars) from March 2022. The number of days that each car was listed for sale on iSeeCars.com was aggregated at the model level, and the average days on market for each was mathematically modeled. Heavy-duty vehicles, models not in production prior to the 2021 model year, and low-volume models were excluded from further analysis.

iSeeCars.com is a car search engine that helps shoppers find the best car deals by providing key insights and valuable resources, like the iSeeCars free VIN check reports and Best Cars rankings. iSeeCars.com has saved users over $339 million so far by applying big data analytics powered by over 25 billion (and growing) data points and using proprietary algorithms to objectively analyze, score and rank millions of new cars and used cars.

This article, the Fastest-Selling New and Used Cars in Today’s Market, originally appeared on iSeeCars.com.