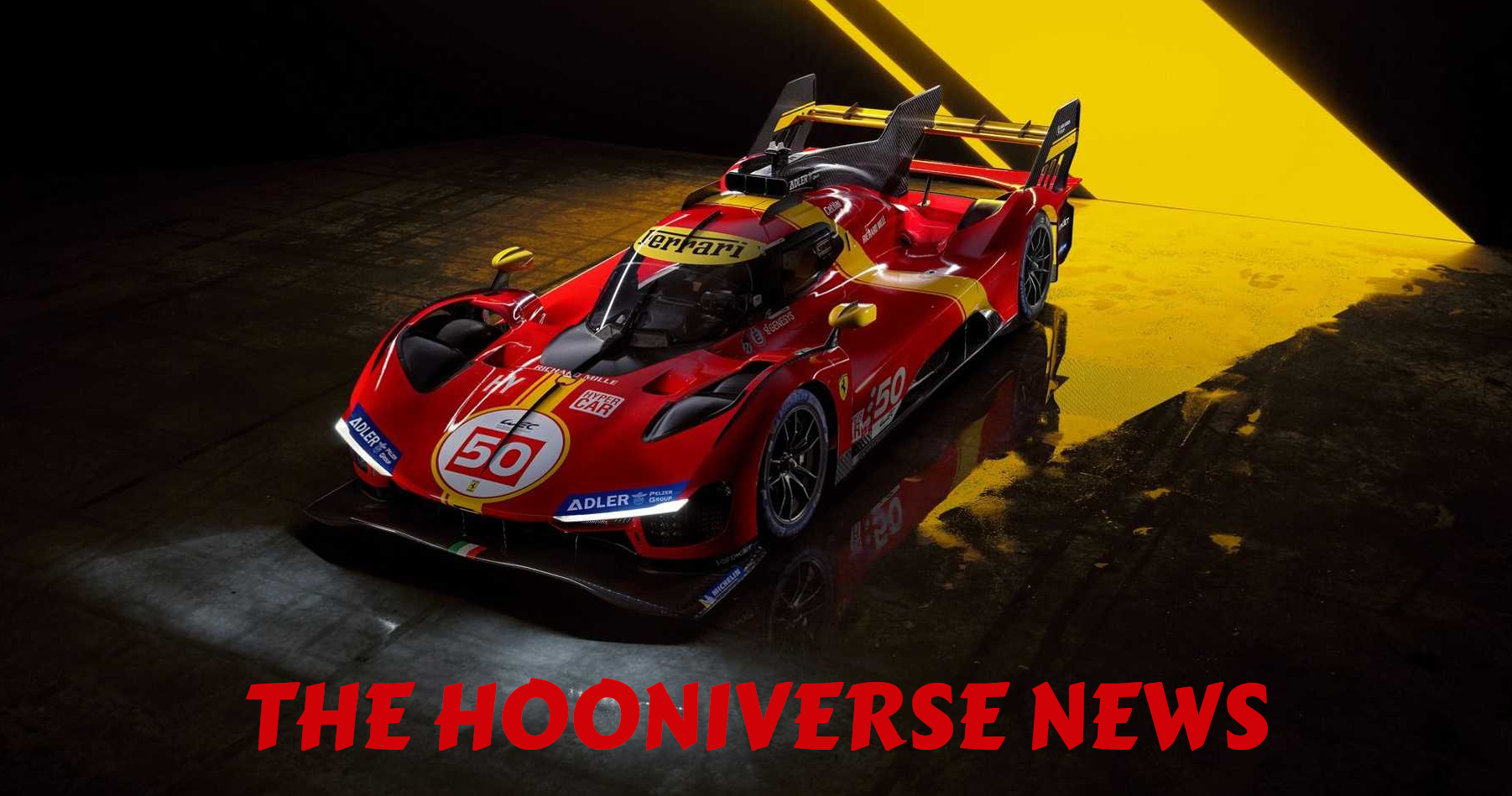 Welcome to the Hooniverse News! As always, this is a weekly recap of the biggest stories in the automotive industry without the fluff or bull. This week: Ferrari finally shows off their Le Mans Hypercar, Ford offers the perfect starting point for overlanding van life people with the Transit Trail, plus your news for the week.

As next year’s Le Mans Hypercar and GTP field takes shape, Ferrari is the latest to show off their ride for 2023 and beyond. The Ferrari 499P is their first foray into prototype endurance racing since the 333SP and it has the 24 Hours of Le Mans – and potentially America’s biggest endurance races in IMSA – in its crosshairs.

Convergence between LMDh and Hypercar convinced Ferrari that it was worth going through the effort and the investment. The ultimately chose the Hypercar rules because they wanted to build 100% of the car themselves, which is a very Ferrari-like thing to do. It will be joining Toyota, Peugeot, and maybe sometimes Glickenhaus who have also developed cars with this formula. On the LMDh side we’ll have Acura, BMW, Cadillac, Porsche, and later on Lamborghini and Alpine (who currently run an old LMP1 car in LMH). The idea of convergence is that any of these cars will be able to run at Le Mans and in IMSA if they so choose and if they have a legitimate sales presence here in the states.

Ferrari has not confirmed one way or another if they’ll bring it stateside. But Ferrari’s head of GT Track Car Development noted that they had Daytona, Sebring, Road Atlanta, and other American tracks in mind when they developed it. So it won’t just be a car that works at Le Mans and nowhere else, and if they ever do compete in IMSA, they’ll be ready. There’s also no confirmation as to whether this will be exclusively a factory effort or if they’ll sell cars to their top professional teams, such as AF Corse and Risi Competizione. Grains of salt and such.

Now onto the good stuff. Ferrari’s choice of power is a 120-degree twin-turbocharged V6 based on the powerplant for the new 296 GTB. While it’s not confirmed, I suspect it has quite a bit in common with the engine in the upcoming 296 GT3 that will also debut next season. But then again they’re designed for totally different scenarios. That engine alone is capable of up to 670 horsepower (per regulations) and is mated to a seven-speed Xtrac gearbox. Gas power goes to the rear wheels while electric power turns the front wheels. Ferrari was able to tap into their invaluable experience of being the most disappointing team in F1 to develop that hybrid motor and its energy recovery systems. The electric motor can only be activated above 75 mph (to help balance the performance between RWD and AWD cars) and total system power can never exceed 670 horsepower. So when the electric motors kick in, the load on the gas engine is reduced.

The 499P is developed around a carbon fiber monocoque as pretty much everything is at this level. It uses a double wishbone pushrod suspension system at both ends and takes full advantage of its wild aero. It was shaped in the wind tunnel with performance in mind first and some signature Ferrari styling second. Some of its key features are a double-stacked rear wing with probably the largest end plates you’ve ever seen. The rest of the body is as smooth as a Ferrari should be with minimal jagged edges and unnecessary geometry. While Peugeot’s wingless 9×8 is the most striking car in the WEC field at the moment, Ferrari’s might be the prettiest – as it should be.

I’m not seeing confirmation regarding its debut race. The first stop on the 2023 WEC calendar is Sebring before it goes back to Europe for the spring and summer. I’m sure it will be racing as soon as it’s ready for primetime.

As promised, Ford unveiled the camping influencer-ready Transit Trail this week as the automotive aftermarket industry has come together at SEMA. I’m sure we’ll be seeing plenty of these on the SEMA floor next year because the Transit Trail “gives adventure seekers an upfit-ready van straight from the factory”. Designed to be customized for a home away from home on the trails, it’s about to be featured in so many of those “look how wealthy I am” Instagram Reels that are forced into your timelines.

The Transit Trail is available in medium and high-roof cargo van configurations and an extended-length high-roof model for maximum interior space. The Long Medium and Long High specs are 235.5″ long while the Extended High is 263.9″. The Long Medium spec offers up to 52″ of headroom, 72″ of max cargo height, and 357.1 cubic feet of cargo volume. Long High increases that to 56.6″ of headroom, 81.5″ max cargo height, and 404.3 cubic feet of cargo volume. Meanwhile, the big ass Extended High has even more cargo volume than the Long High at 487.3 cubic feet. High Roof models allow standing room for people up to 6’5″ and the cargo area floor on the Extended High stretches to 14 feet. So much room for activities.

Power comes from a 3.5-liter EcoBoost V6 which delivers 310 horsepower and 400 lb.-ft. of torque to all four wheels through a ten-speed automatic. Ford’s AWD system has five drive modes, including Mud/Ruts, Tow/Haul, and Slippery, plus the usual Normal and Eco modes. Maximum payload capacity is 3,703 lbs, 3,614 lbs, and 3,406 lbs respectively. Towing capacity can be as high as 6,500 on the Long Medium model with the Heavy-Duty Trailer Package.

Its abilities off the beaten path are improved by a 3.5″ increase in ride height, a 2.75″ wider track, and 30.5″ Goodyear Wrangler Workhorse all-terrain tires wrapped around bespoke 16″ black alloy wheels. The van also sports a black grille with marker lamps, a “skid plate-style front bumper” (which I think means it’s not going to be a real skid plate when you need it to be) splash guards, wheel arch cladding, front wheel arch liners, and slider-style side steps for the front doors.

Ford did not compare approach or departure angles to standard Transits, but did confirm a 19.5-degree approach angle and a departure angle of 25.3-degrees on the Long models which shrinks massively to 15.6-degrees on the Extended model. Minimum ground clearance on all models is 6.7″. Not a serious off roader by any stretch but should at least be good enough to get away from civilization while bringing a house with you.

Because this was developed by Ford Pro and is literally just a Transit with some Subaru cosmetics, buyers will have access to the Ford Pro network of upfitters and interior installers through fordupfits.com. They can still visit any Ford dealer for service and to be robbed if they so choose. The Transit Trail has an MSRP of $65,975 (not including destination and the mandatory markups) and is available to order soon.

What’s your news for the week?

Normally during SEMA week I try to highlight some of the more interesting concepts from the show floor. But this week I just don’t have the time for it. There’s just so. Damn. Much.

So that’s all I’ve got for you this week, so now it’s your turn. If you saw anything, fixed something, broke everything, or otherwise did anything even remotely car related that you want to share with your fellow hoon, sound off in the comments.

Have a good weekend.