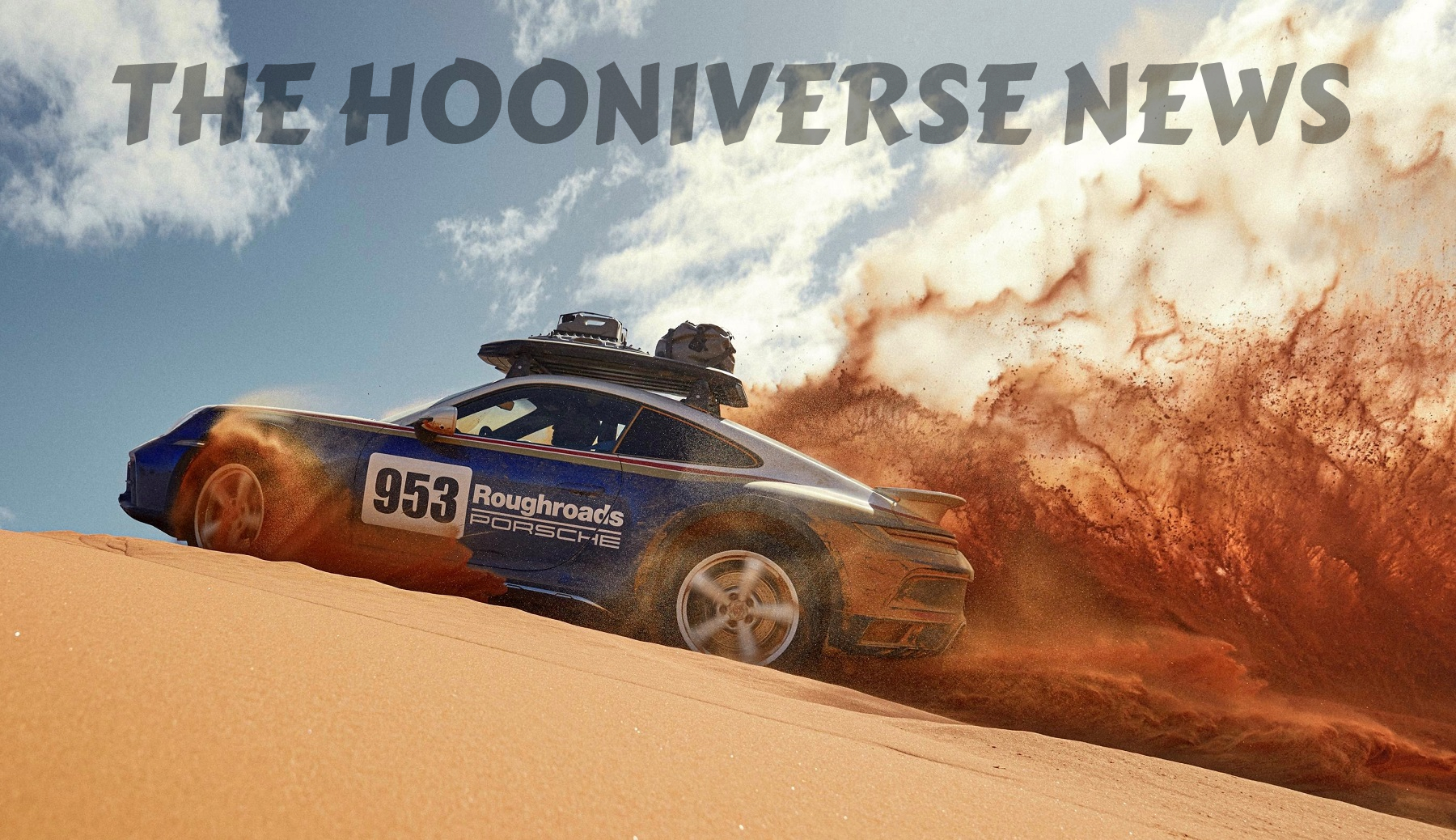 Welcome to the Hooniverse News! As always, this is a weekly recap of the biggest stories in the automotive industry without the fluff or bull. This week: Toyota stuns with the new…. Prius?!, Porsche builds a 911 ready for the sand dunes, Lamborghini does the same for some reason, Subaru has a new Impreza thing, Genesis does the thing again, plus your news for the week.

Choosing to put the Toyota Prius in the coveted top spot of my “weekly” news column above a Porsche and a Lamborghini might as well be a sign of the end times. But for real, the Toyota Prius ended up being one of the biggest stories in the industry this week as it descends upon LA for their big auto show thing. It sort of caught everyone off guard. That’s because for the first time in recorded history, the Prius is hot now. One of the single most influential cars in automotive history is getting a major overhaul with a whole new generation beginning with the 2023 model year.

It’s built on the latest “TNGA-C” platform, which translates to a lower center of gravity (also helped by being able to mount the batteries lower in the car), less weight, and increased rigidity. It also enabled the design and engineering teams to develop what might be one of the most striking hybrids on the market. The design features a “piercing”, flowing, one-motion silhouette with a fully modernized and sportier look. It not only looks futuristic and aggressive, it’s helping aerodynamic efficiency as well. They did not publish its drag coefficient, but I suspect it’s shockingly low.

Toyota’s 5th-generation hybrid powertrain consists of a 2.0-liter four-cylinder gas engine and a newly-developed lithium-ion battery located under the rear seat. The Prius can be had in FWD and AWD configurations thanks to an added high-output, compact Interior Permanent Magnet motor over the rear axle. FWD models are rated at 194 horsepower with a 0-60 mph time of 7.2 seconds, compared to 9.8 seconds on the outgoing model. Step up to AWD and you get 196 horsepower and a 7.0-second 0-60 mph time. Most importantly, the Prius is targeting a manufacturer-estimated 57 mpg (FWD model – no word on that figure for AWD).

The usual suite of new tech and safety features, many of which are standard, are included and you can probably guess what all of them are. Big screens, driver assistance tech for shitty drivers, and a glass roof are all available. The pricing and on-sale date of the 2023 Toyota Prius will be announced later this year.

Porsche saw all those Safari 911 builds and decided there was a money making opportunity. The 911 Dakar, one of the worst kept secrets of all time, finally debuted this week as a limited-edition sports car that can tear it up on loose surfaces and back country roads alike. It harkens back to the 1984 Paris-Dakar Rally which Porsche won overall with a heavily modified 911, known more formally as the 953. It was the first time an AWD system was used in a Porsche 911. That legendary race car was the direct inspiration for the 911 Dakar 28 years later.

Limited to just 2,500 units, the 911 Dakar features a 50 mm (just under 2 inches) increase in ride height over a standard Carrera model with Sport Suspension. But a standard lift system can raise it further by another 30 mm (~1.2 inches) to achieve a ride height and ramp-over angle similar to some SUVs. This High Level suspension setting allows for some unique suspension calibration and can be used at speeds up to 105 mph off road. It rides on specially developed Pirelli Scorpion All Terrain Plus tires sized 245/45 ZR 19 front and 295/40 ZR 20 at the rear. These tires feature reinforced sidewalls and tread with dual carcasses.

Power is provided by a 3.0-liter twin-turbo flat-six that’s rated at 473 horsepower and 420 lb.-ft. of torque. An eight-speed PDK sends that power to all four wheels, and rather effectively. 0-60 mph takes just 3.2 seconds and its top speed is limited to 150 mph, but only due to limitations with the all-terrain tires. Other party tricks include rear-axle steering, engine mounts from the 911 GT3, Porsche Dynamic Chassis Control with body roll reduction, new Rallye Launch Control, and Rallye and Off-Road driving modes. And despite the added off road features, the 911 Dakar weighs in at 3,552 pounds, just 16 pounds more than a 911 Carrera 4 GTS with PDK.

Some external updates include a fixed rear spoiler, a CFRP hood taken from the GT3, front and rear tow hooks made of forged aluminum, and flared fender arches and rocker panels. There are also some stainless steel body elements on the front and rear fascia and side skirts for obvious reasons. Meanwhile, the side air intakes front fascia also have stainless steel mesh grilles to keep rocks and other damaging objects from entering. The roof is equipped with a 12-volt socket for the headlights of the optional roof basket. That can hold up to 92 pounds of equipment needed for a play date in the sand. You can also get a roof tent for it as well.

Probably the coolest option available for it though is the Rallye Design Package which pays tribute to the 1984 race winner in beautiful fashion. A two-tone paint job consisting of white and Gentian Blue Metallic serves as the foundation for an old-school Rothmans racing livery complete with red and gold striping, number boards, and “Roughroads Porsche” in place of the Rothmans logo that they didn’t want to pay royalties for.

The hottest new trend of “hey let’s take this expensive sports car and make it go off road, cause owners will definitely do that” continues with Lamborghini. The Huracan Sterrato is Lamborghini’s foray into this brand new market that will probably only get bigger. Sterrato just means “dirt road” in Italian, which is fitting.

Technical details on the Huracan Stiletto are not available yet as the formal unveiling is scheduled for November 30th at the Art Basel in Miami. But the Huracan’s V10 and AWD system, which I’m sure was retuned a bit for light off road use, still make the cut. Going by the photos alone, it’s obvious there’s a lift, some underbody protection and body cladding, Bridgestone Dueller A/T tires, auxiliary lighting, and a roof rack.

Whatever the final specs of the Huracan Sargento may be, this certainly looks like it’ll be a good time. And these will probably still see more off road use than those angry eye Jeeps.

Looking for a new compact Subaru but correctly believe the new WRX is hideous? Subaru may have something for you with the 2024 Impreza. Sporting a completely new design, this five-door compact hatchback brings some new features an available “performance” model. It’s also ditching the sedan option and going hatchback only.

It’s built on Subaru’s latest Global Platform which means there’s a whole 10% higher torsional rigidity, improved dynamic performance, a smoother ride, and a quieter cabin. The cabin has been tweaked to focus more on the occupants and their interaction with the vehicle, which is pretty much the whole point of a car’s interior. Subaru says the front seats are more supportive and helps to minimize fatigue, as does the reduced cabin noise. In the center console, an 11.6″ infotainment screen is now available along with wireless Android Auto and Apple CarPlay.

The car’s powertrain has not changed much at all on the standard models. That means a 2.0-liter Boxer four-cylinder produces 152 horsepower and 145 lb.-ft. of torque and a CVT with simulated shifting via paddles to go with it. All models continue to run with Subaru’s Symmetrical AWD and a version of the dual-pinion electronic power steering rack from the WRX. Things get marginally more exciting when you opt for the Impreza RS (pictured in red) which adds a 2.5-liter Boxster engine capable of 182 horsepower and 178 lb.-ft. of torque. The RS model also adds exclusive 18″ wheels and some body trim stuff.

The 2024 Impreza goes on sale next spring. Pricing info is not available yet.

Genesis does the thing again

It’s another Genesis concept, but this time it’s a convertible. Looks gorgeous but it’s unclear how much of what we see here will be present on future models. Some design elements are already in production, but this clearly takes those a step further. Time will tell. But for now, enjoy the pretty pictures.

What’s your news for the week?

So that’s all I’ve got for you this week, so now it’s your turn. If you saw anything, fixed something, broke everything, or otherwise did anything even remotely car related that you want to share with your fellow hoon, sound off in the comments.

Have a good weekend.