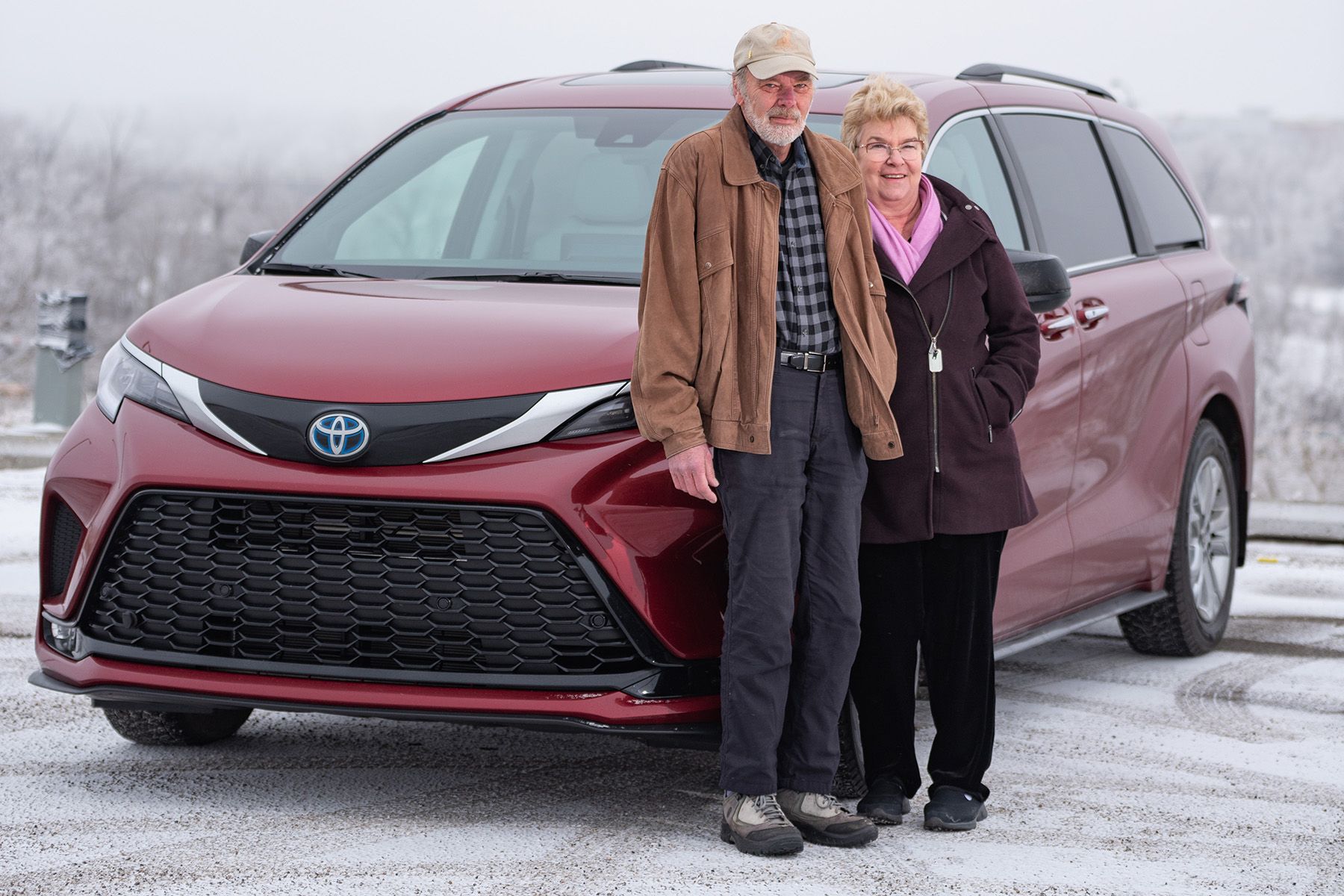 Blurring the line between the SUV and the minivan. According to Cathy Martin, the 2022 Toyota Sienna manages to do just that.

“If I was walking past one in a parking lot and quickly glancing at it,” the Calgarian says of the Sienna, “I might think it was an SUV.”

When Toyota launched its fourth-generation Sienna late in 2020 as a 2021 model year minivan, the automaker significantly revised the vehicle’s sheet metal. There were new body lines and contours that conspire to give the perception of a longer front end, and that’s something that contributes to Martin’s thinking it almost looks like an SUV.

Cathy and husband Bob took turns behind the wheel of a 2022 seven-passenger Sienna XSE AWD for a Reader Review. They’re no strangers to the world of the minivan. When their family was younger, they drove a 1991 Plymouth Voyager – and enjoyed the overall utility it provided. Now, Bob drives a 1946 Chevy pickup truck on a daily basis (you read that right — a 1946), and Cathy’s vehicle is a 2002 Subaru Forester.

“We tend to keep our vehicles for a very long time,” says Bob, a retired mechanic who has owned his ’46 Chevy for almost 50 years. “But we’re not unfamiliar with newer vehicles and technology, because we’ll occasionally get behind the wheel of a modern rental.”

Bob thought the Sienna had a wide stance and was appealing to look at. Cathy couldn’t quite get past the design of the grille – she thought it harsh. Otherwise, she found the overall profile attractive. Finished in Ruby Flare Pearl, a colour Bob says is a nice shade of red over the Moonstone/Grey Flannel mixed Softex and perforated leather interior, the Martin’s test vehicle cost just a bit more than $56,000. It included the $5,755 technology package, giving the van LED fog lamps, 9-inch touchscreen, JBL sound system and many other extras.

One of those extras Bob really liked to use was the digital display rear view mirror. “I wasn’t really comfortable looking out the mirror through the back window over the rear seats,” Bob explains. “But that rear view mirror camera really made a difference.”

This was the first hybrid we’d ever driven.

Bob is 5-feet 10-inches tall, and Cathy is 5-feet 6-inches in height. When swapping between drivers in their Subaru they don’t usually have to make any adjustments to the seat or controls, and they found it quite simple to get settled in the Sienna with its 8-way power adjustable driver’s seat, plus 4-way power lumbar support. The passenger seat features 4-way power adjustability.

“I did spend time in the driveway just touching all the buttons to see what did what” Bob says, and adds, “That was fairly intuitive, but I did look through the 600 page owner’s manual.”

He liked the graphic display showing the power transfer between Toyota’s hybrid and gasoline engine. All Sienna minivans come with a 2.5-litre double-overhead cam four-cylinder engine and Toyota’s Hybrid Synergy Drive system that provides 245 net horsepower. As opposed to a fully electric vehicle that gets its energy supply by being plugged in, a hybrid vehicle combines a gas engine with an electric motor. With a hybrid, depending on the driving conditions, the vehicle will be powered by electric only, gas only, or a combination of both sources. In the most simple description, the hybrid electric motor’s high voltage battery gets its charge from the gas engine and regenerative braking and is smaller and lighter than the battery found in an electric-only.

“This was the first hybrid we’d ever driven,” Bob says. “I think it’s very smart technology, because you’re not relying on having to recharge the vehicle to (take advantage of the electric drive function).”

Cathy adds, “The hybrid appeals to me as opposed to a full electric, too. This offered good pick up for merging into traffic, and there was never any hesitation.” And Bob says, “The CVT transmission just hums along, you don’t ever really feel or hear it doing its job. On the highway, there was enough power to pass, and the hybrid was seamless in operation.”

Toyota’s fuel economy rating is 6.7 L/100 km combined city and highway driving. Bob and Cathy drove the Sienna in a mix of conditions, hitting the highway on a couple of occasions. They calculated their economy at 7.1 L/100 km.

Ride and handling were good, according to the Martins. It also had a tight turning radius, and Cathy found the minivan easily navigated parking lots and it wasn’t difficult to wheel into tight spaces.

“It wasn’t so big that I had to find larger parking spaces,” she says. “And there was plenty of cargo space to carry anything you’d need, including bikes.” Bob adds, “The rear liftgate was easy to operate and the toe kick function was very handy to use, while the seats fold and tuck away almost flat into the floor – and that presents a very large cargo area.”

Both of them were very comfortable driving the Sienna and felt it would be easy to spend hours behind the wheel.

“I was impressed, and felt safer, knowing that there are 10 airbags,” Cathy says. “This would be an awesome van for families.” Bob concludes, “Or, it would be ideal for a couple like us, because it’s handy to get in and out of, and there are great storage and hauling capabilities.”

115 kms. Picked up car and headed out to Bragg Creek. First impressions – fine-looking vehicle; very smooth ride in the city and on the highway. Good acceleration; good turning radius. Comfy seats, with good lumbar support noted in driver’s seat especially. Cathy kept busy checking out all the little extras in the interior… excellent console space – an open area on the lower portion, plus covered cubby hole and four drink holders on the upper (two of which were large enough for the water bottle which doesn’t fit into our Subaru cup holders). Great leg room. Nice big screen for reversing, with easy to manage touch controls for GPS, radio, etc. I discovered the alternate rear view mirror look, which utilizes a camera – really liked that. Cathy drove home, stopping to show off vehicle to a couple of friends. People were impressed. Used GPS, just to say we did…works well.

Day 2 15 kms. Just did some shopping today. Realized it was AWD, which is awesome. Appreciated the snow tires but didn’t drive much on snow. Found that the rear seats stowed easily for larger “trunk” space.

Day 3 72 kms. Went for our photo shoot, then out for lunch in the deep south. Home via Deerfoot, using GPS again.

Day 4 5 kms. Only had to run a couple of quick errands today but do question the effectiveness of a tire repair kit instead of a spare tire.

Day 5 34 kms. Headed out to two farmer’s markets today, with Cathy sitting in the second row seats. She liked the sunscreens on the windows there, also the fact that the windows open. Sunroof is great – opens two ways or stays closed and can be covered up. Auto opening/closing side doors work smoothly. Lots of plug-ins – USBs, HDMI (didn’t use screen in back – for movies for passengers), 120V, 12V. Didn’t use BlueTooth for phones (don’t have smart phones) but listened to our playlist via iPad. Great speakers!

Day 6 145 kms. Out into the countryside today. Visited near Madden, then to Big Hill Springs Provincial Park. Home via Cochrane. The hybrid feature is excellent, although we were never sure when, why, how it would kick into EV mode…lots to learn there, I suspect. Like the unsafe-to-pass lights on the side mirrors. Also, the heated steering wheel. Used to heated seats — which we love — but not to a heated steering wheel.

Day 6 32 kms. Cathy just ran a few errands today. She likes the kick to open the back door feature – so handy when your hands are full. She also noted that the interior light can be turned off so that it doesn’t go on when the doors open – a nice option. Had to fill ‘er up and reluctantly return vehicle. Provided some impressive gas mileage.

Sign up to receive Driving.ca’s Blind-Spot Monitor newsletter on Wednesdays and Saturdays

Thanks for signing up!

A welcome email is on its way. If you don’t see it, please check your junk folder.

The next issue of Driving.ca’s Blind-Spot Monitor will soon be in your inbox.

We encountered an issue signing you up. Please try again