Performante Power Without The Price: The Lamborghini Urus, Cooled By CSF 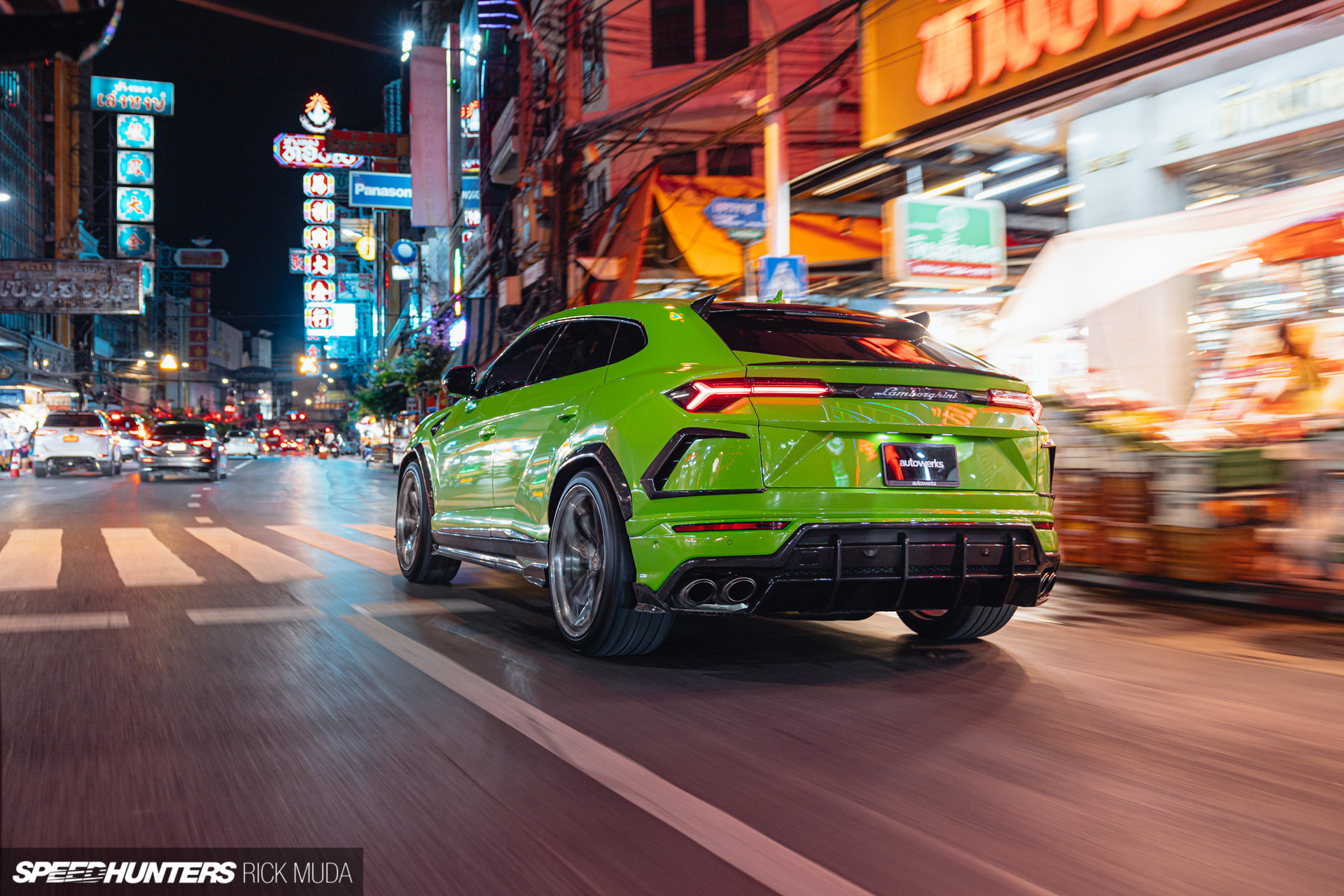 It wasn’t that long ago when the idea of a performance SUV seemed like an alien concept.

GMC’s Typhoon may have kicked this off back in the 1980s – and for that car alone we’re eternally grateful – but it wasn’t until the late ’90s when the Germans took this fast 4×4 platform and pushed it all the way to the mainstream. Think Mercedes-Benz ML, BMW X5 and Porsche’s Cayenne.

Fast-forward to 2022 and this genre isn’t so niche anymore. In fact, SUVs represent some of the best-selling models on the planet full stop. So popular in fact that even Ferrari – who once swore they’d never build an SUV – have now jumped on the bandwagon too.

Love ‘em or hate ‘em, SUVs are here to stay.

To say performance SUVs fit within the modern agenda of sustainability is a bit like saying the Titanic sprung a small leak. That’s a completely different conversation, so for the sake of Speedhunters’ sanity we’re going to focus on the positives about these cars. Performance. Lots of performance.

And not just petrol performance either. Remember the Audi SQ7 V12 TDI? That used a 6.0L twin-turbo diesel V12 to celebrate Audi’s dominance at Le Mans. Horsepower seemed quite modest by today’s standards, set at 500hp, but torque had to be electronically limited to 1,000Nm. With a cheeky little ECU flash, you’d be closer to 600hp and 1,200Nm.

Then there was VW’s V10-powered Touareg, and the BMW X5 with the same V12 found in McLaren’s F1 GTR stuffed in its nose. The more you dig into this class of oddities, the more you realise that performance SUVs have actually been some of the most interesting new vehicles in recent years.

And then you get to the ones which somehow manage to translate their straight-line performance into cornering performance too. Models like the Lamborghini Urus which, from some angles, looks a bit like a Huracán put its head in a wasp nest. But mash the throttle and it’ll do similar things to your own face.

Credit to the engineers? Without a doubt, but this Lamborghini’s very existence proves there’s not only demand for a supercar-priced SUV, but an audience out there wanting to modify them too. And you can thank the model’s twin-turbo V8 for that, a powerplant pinched straight out of the Audi RS6 and tweaked to produce 649hp.

But if people will spend serious money on a stock Urus, it goes without saying they’ll pay a big premium for the ‘Performante’ edition too, right? Yes, but perhaps only until they realise there’s just a modest 16hp power increase. So is it really worth forking out all that extra cash for a slightly-tweaked Lamborghini, or can you get even more power for less dollar? This is Speedhunters, so of course we’re going to push for the latter.

Thankfully, CSF Radiators follows this same ethos whether it’s for a Civic Type R or the latest Italian super-SUV. One company taking full advantage of CSF’s extensive product line is Autowerks, based in Thailand.

Thailand’s modified car scene is absolutely blowing up right now, and if a striking Verde Mantis Lamborghini Urus doesn’t grab your attention, nothing will. But more importantly than that, this is the first Urus to be modified in the Southeast Asian country, and with a whole host of world-first parts fitted, it’s safe to say the Autowerks team haven’t held back.

First thing’s first, the performance. Being the same 4.0L twin-turbo V8 as found in the C8 RS6, there’s already plenty of knowledge floating around on the engine’s capabilities. With just under 650hp from the factory it’s no slouch, but throw the right hardware into the mix and that beast of an SUV will be transformed into a total monster.

That’s where CSF Radiators come into play. It’s one thing to increase boost and airflow with a turbo upgrade, but utilise this without the correct cooling and your engine’s potential is always going to be limited. On the flipside of that, simply cutting up a US$220,000+ car to incorporate larger coolers isn’t an option most owners are going to be too happy about. Time to engineer a solution…

CSF first released their Audi RS6/RS7 (C8) intercoolers last year (these units also fit the RSQ8 as well the new Porsche Cayenne Turbo GT), so the initial design and core dimensions could be carried over in order to improve the engine’s efficiency. But with a completely different packaging – right through to the bumper ducting and angle the coolers are mounted – the tricky part would be ensuring they lined up with all the OEM mounting points to create a true ‘drop-in’ design.

With physical space limited, how else do you improve an intercooler’s efficiency? Take a look at the black finish below. That’s not just for looks, even though it is suitably badass. It’s actually a special thermal rejection ceramic coating which disperses the heat by an extra 15% compared to a non-coated intercooler. This coating can only be applied by an aerospace coating company in California where CSF is based, and is specifically used for these kinds of premium upgrades.

Improved efficiency and capacity means even more power. That’s a win in itself, but the biggest benefit from the CSF x PWR Urus intercooler kit is its ability to recover (and fight off) heat-soak. Not only does it improve peak performance, but the coolers help the 4.0L V8 maintain a consistent power level run after run, even in hotter conditions. By comparison, the OEM intercoolers and the rate they deteriorate with heat-soak means that performance is compromised even during hard road use.

It all sounds very impressive, but what does that translate to for the Autowerks Urus? With cooling taken care of it means they were able to utilise a pair of TTE833 turbos from The Turbo Engineers, and once combined with a free-flowing exhaust system and ECU tuning, power is increased by almost 200hp over stock.

836.1hp is the magic number, but torque is also bumped up to 1,031Nm. Trust us when we say, this kind of power in a 2-tonne SUV doesn’t feel watered down in any way. It is savage all the way into license-losing speeds, and the V8 soundtrack builds drama with every RPM.

The power jump only tells half the story with this build. Because there’s nothing subtle about an 836hp Verde Mantis Urus anyway, why not raise the exterior to match too?

Unsurprisingly, there isn’t really an off-the-shelf bodykit for the Urus, so Autowerks turned to TopCar in order to create a bespoke, one-off bodykit combined with a camo green carbon hood. Autowerks lowering links bring the ride height down to sit perfectly over a set of HRE P111SC wheels for a truly menacing look.

Ironically, the Autowerks Urus not only blasts past the Performante edition in horsepower, but the TopCar aero pushes the styling way beyond even what Lamborghini can offer from their limited Performante model.

Whether performance SUVs are your thing or not, you do have to give credit to automakers like Lamborghini for their ability to push not only what’s acceptable with an SUV, but also for building a base that – even as a $220,000 model – still has room for tuning.

The fact there’s demand for these cars to even exist in 2022 is a mind-bending fact in itself. And with tuners already taking the 4.0L V8 engine past 1,000hp in other applications, it’s something we’ll only encourage more of.

So, with that in mind, what’s your take on the performance SUV industry? Let us know in the comments below…