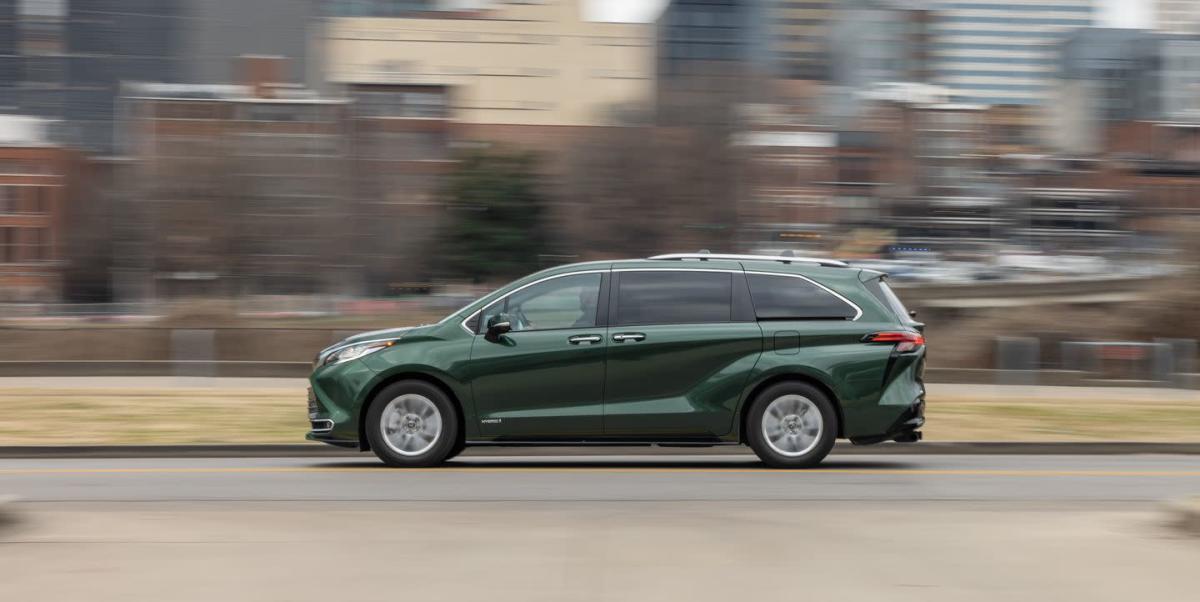 It may be hard to imagine that among a long-term fleet filled with such potent machines as a BMW M3, a Porsche 718 Cayman GTS 4.0, a Chevrolet Corvette, and a Ram TRX, a member of the woefully underappreciated minivan species is one of the most popular. No one on staff ever thinks of the Toyota Sienna when talking shop at the bar, but its popularity and proficiency in moving people and things underscore its versatility as a compelling alternative to an SUV.

Now suspend disbelief for another moment and pretend that this “15,000-mile” update came last summer, when the Sienna’s odometer tripped that mark. Between pandemic-related logistic issues, drivers embarking on road trips, and everything else that is daily life, we fell way behind on updating you on life with the Sienna. We’ll call this a belated 15,000-mile update with more to come soon.

The Sienna’s honeymoon phase was rainbows and sunshine. After the very un-Toyota-like unscheduled service stop for what turned out to be a loose bit of weather stripping, the Sienna ran without fault. ToyotaCare covers regularly scheduled maintenance for up to 25,000 miles, and by 15,000, we had taken our green van to the dealer three times at 5000-mile intervals. All service up to this point was relatively basic, consisting of oil changes, inspections, and tire rotations.

As mentioned, the Sienna went to work during the busy summer months. It headed west—very west—to Washington State and south to the Great Smoky Mountains. It also served as the literal honeymoon machine for associate buyer’s guide editor Austin Irwin, who installed a Roofnest Falcon rooftop tent for the adventure. This is a clamshell design that goes up and comes down with relative ease—once you muscle it atop the roof. While the Falcon model is no longer available, the Falcon 2 is its direct replacement in Roofnest’s line at the same $3595 price as the original. This elevated tent proved to be valuable for Irwin’s outing, making for none of the damp mornings that come from ground-based setups as well as preventing his dog from climbing inside and making a mess. The biggest downside to a rooftop tent, he surmised, is that if you want to leave your campsite in your vehicle, you must fold up the tent, which means packing up sleeping bags and anything else you want handy come nightfall.

The Sienna was averaging 32 mpg at this point, and when cruising at 75 mph, it posted an impressive 33 mpg on our highway fuel-economy test. But with the tent folded on the roof, its average fell to the upper 20s (one tank was 25 mpg, another 27). These findings are purely anecdotal, but the fuel-economy hit is worth considering if you’re in the market for such a tent. And if you have one, don’t leave it on your roof when you’re just driving around.

In terms of overall efficiency, the Sienna’s is exceptional for a minivan. Our 2018 Honda Odyssey averaged 23 mpg over 40,000 miles, and a 2017 Chrysler Pacifica fared 1 mpg worse than that. The hybrid Sienna’s 32-mpg figure is whopping 39 percent better. Of course, you could instead opt for a plug-in-hybrid Chrysler Pacifica, which would return even better mileage if your daily commuting fell within its 33-mile EPA electric range, though we averaged only 29 MPGe with our 2018 example.

For the latest Sienna, everyone seems to love its combination of frugality and practicality, even if most logbook comments mention the hybrid powertrain’s penchant for hitting high, whiny notes when you try to pass someone on the highway. Parents also found the rear-seat entertainment system’s lack of iPhone compatibility to be frustrating—so much so that we’d probably recommend spending less than the $1415 for the factory system and just buying a tablet or two. When you spec the second-row screen, Toyota also mandates an AC inverter ($300) and a rearview camera system ($200), the latter being necessary because when deployed, the fold-down display completely obscures the rearview mirror’s field of view. But the Sienna’s virtues wholly outweigh these demerits. Thus far, it has impressively represented its kind.

No one ever thinks minivan is the answer when asked: What car is a group of automotive journalists most likely to jockey for? But it is. Give us a minivan and we are instantly reminded of how much we love a practical machine. Our long-term Toyota Sienna did just that. It has been in all but constant motion since it arrived in late May, taking trips as the family schlepper du jour of the C/D long-term fleet.

If you didn’t know, the Sienna is new for 2021, and while it doubled down on grille proportions that border on comical, the important news is the powertrain: All Siennas are hybrids. This move netted the people mover a whopping 15-mpg improvement in the EPA combined metric. Front drivers are now 36-mpg machines, and all-wheel-drive Siennas, such as our long-termer, get a big 35 mpg on the Monroney label.

We asked Toyota for a Cypress Green Sienna, a color only available on the top two trim levels. We went with the penultimate Limited. It costs less than $50,000 to start, but once we got the rear-seat entertainment ($1415), an AC power inverter ($300), a rearview mirror that can also display a video feed should your van be loaded to the gunwales ($200), a mini spare tire ($75), and $220 in all-weather floor mats, we ended up with a $51,885 machine. There are eight-passenger versions, but Limiteds have only seven seats, and those second-row captain’s chairs are much more comfortable than the Stow ‘n Go seats in a Chrysler.

Unlike all-wheel-drive Siennas of yore, the rear axle is directly driven by a motor. There’s no driveshaft, just like in other all-wheel-drive Toyota/Lexus hybrids. Both front- and all-wheel-drive models produce the same 245 horsepower because the electric power is limited to what the hybrid battery can produce. Initial testing revealed a 7.6-second 60-mph time and a quarter-mile elapsed time of 15.7 seconds. That’s about how it feels. A Honda Odyssey is 1.1 seconds quicker, and the previous V-6-powered Sienna was quicker than the new one as well.

At least that swap to hybrid pays off at the pump as we’ve averaged 32 mpg so far. That’s 39 percent better fuel economy than we saw with our long-term 2018 Odyssey. As with most families making an economic decision, we’d gladly take the savings at the pump at a cost of some droning engine sounds at wide open throttle. Those emanate from the hybrid powertrain’s internal-combustion half, an Atkinson-cycle 2.5-liter inline-four. Once moving on the highway and settled into a cruise, the Sienna hums along at a quiet 67 decibels.

Right after the van showed up, the passenger sliding door wouldn’t close on its own—a first-world problem, we know—and we took the Sienna to the dealer for a very un-Toyota-like unscheduled service visit to fix it. Turns out we could have easily addressed the problem because the weather stripping had dislodged from its track and was doing a very good impression of a kid’s digit. Since then, we’ve had the Sienna in for two scheduled services. Both were typical—oil, filter, inspections—at 5000-mile intervals.

Other than that, the van has been flawless. Some complain about the engine noise while accelerating. The engine droning is very apparent when you get into hilly country. And the van is somewhat lacking in the driver-centric areas such as brake and steering feel. A stiff crosswind does make the Sienna drift, but that’s true of most seven-passenger SUVs.

As we mentioned, the Sienna has been in near constant motion since it arrived: Maine, North Carolina, Michigan’s Upper Peninsula. Maybe that is due to an uptick in road trips, or because we haven’t had a van in a while. Either way it’s a staff favorite, and even if it did sit still long enough to gather moss, we’d never know because of its color.