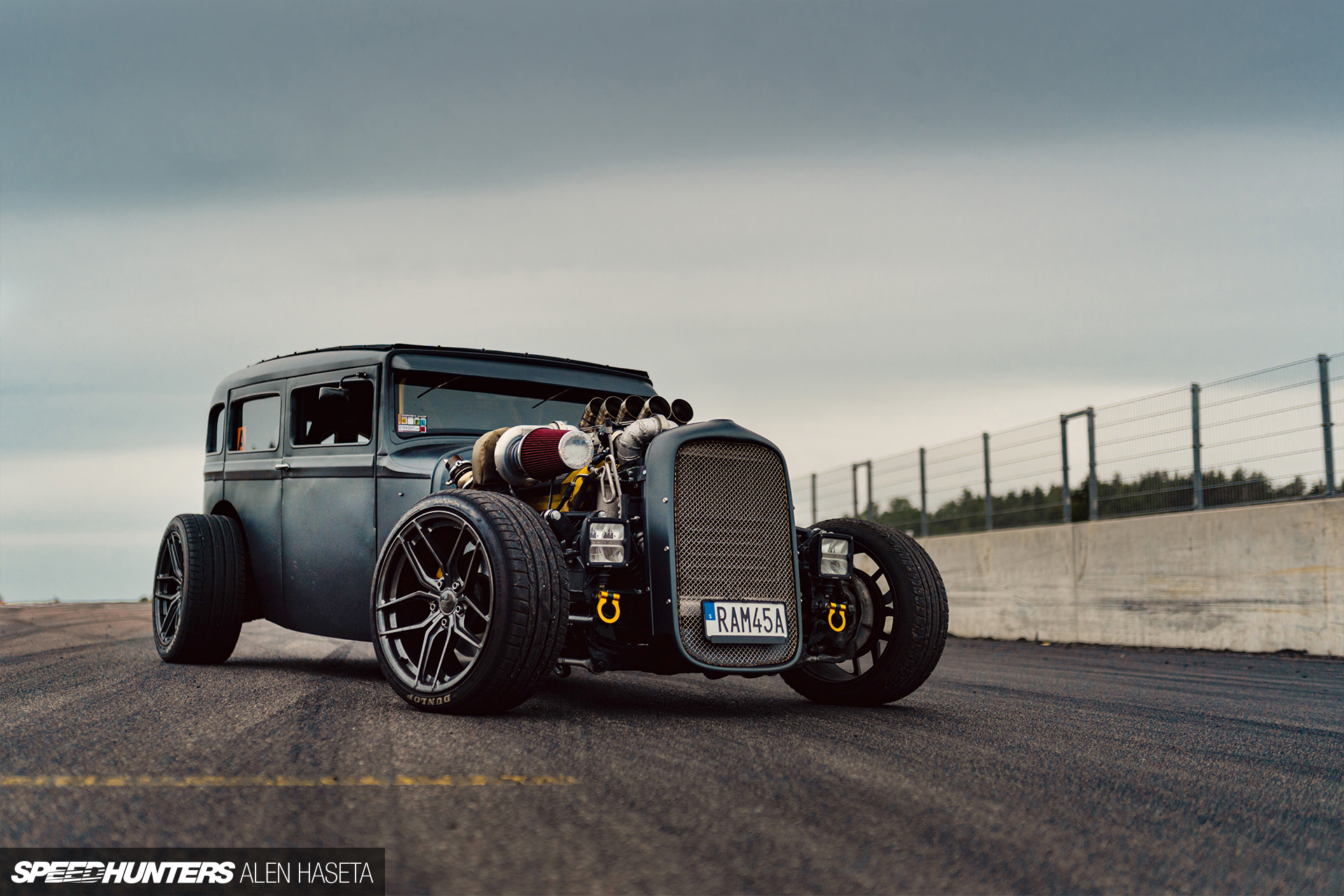 Does anyone remember a Hot Wheels set back in the early 2000s where you had your own garage and could separate a car’s chassis from its body and essentially have the shell hanging in the air as you imagined repairing its underside? Well, I was lucky enough to have this set, and I can remember always wondering what it would be like if I could do the same in the real world. You know, mixing and matching different shells with different chassis.

Of course, with die-casts and other toy cars it’s a walk in the park; in the real world it’s a lot more difficult. It is, however, exactly what Matz Steenbuch did with his 2021 ‘Supermatz’, as he likes to call it.

The 37-year-old from Sweden has been a huge fan of hot rods for as long as he can remember daydreaming about owning one. Matz wishes he could have experienced hot rod culture back in the ’60s, which is kind of like me and ’90s Japan.

I caught up with Matz at Gatebil Mantorp earlier in the summer, and spent some time chatting about his build as I shot it on track one day after the sessions had stopped.

Matz’ interest in everything motor-related began at a young age, and this passion fuelled what would become his ultimate track machine – this BMW-powered Hudson Super Six.

How does one come up with the idea to mix two very different vehicles? A Ford Tudor was always on Matz’ mind for this mash-up, but these have never been easy to find in Scandinavia. The Hudson filled this void after Matz’ friend stumbled upon it in the woods. The other factor is that most of Matz’ friends drive BMWs, so he knew that the brand’s V8s were both reliable and easily modified.

As it sits today, the floorpan and everything around it came from a crashed BMW E39 540i.

Mixing the two cars wasn’t a walk in the park though.

The front carriage, which was the hardest part to figure out due to geometry, had to be moved forward in order for the empty shell to fit and to counter the extra length in the back. Furthermore, the rear part of the chassis had to be shortened. Since the car doesn’t really have any wheel arches, to make it look like it’s slammed on the ground, the roof has been chopped by 9cm and the entire body was dropped.

Speaking of drop, the suspension consists of custom-made upper support arms with custom pushrod suspension in the front, while the back relies on off-the-shelf coilovers for the 540i. The 19-inch wheels are shod in Dunlop Sport Maxx RTs measuring 255/40 in the front and 275/35 in the rear.

The star of the show is the exposed  BMW M62B44 4.4L V8 with a GReddy turbo. A lot of custom work went into the engine, and Matz says it’s now spitting out 523hp and 682Nm. Most of the custom pipework was done by Matz himself in order to achieve the exact look he was going for.

Everything is easier said than done though. Matz had never built a car of this magnitude before and had nothing to compare it to, so he learnt as he went and mostly relied on his gut instinct for the direction.

Everything inside the car is either brand new or custom made. When Matz picked up the shell from the woods north-east of Stockholm, nature had well and truly taken over and the interior had totally succumbed to the elements.

Swing open the doors today and you see that comfort has been thrown out the window. This was not made for Sunday drives with the kids, but maximum track fun.

Aluminium panels, a new floor, freshly trimmed roof and a rally-inspired roll cage painted in a BMW gold hue is what you’ll find inside. The best part is that Matz did all this work himself, too.

Matz sandblasted the entire Hudson shell at the beginning of the build, and as that turned up the need for some extensive rust remedy work, he left the bodywork to the professionals before it was painted in BMW Frozen Dark Grey. A custom rear diffuser was made to accommodate the 3-inch quad exhaust from a BMW M5.

Matz’ biggest reward from this build is all the interest it generates when he brings it out to events. While shooting the creation, we even had law enforcement stop by to check out the build and pose for a picture.

The Supermatz took four years to complete, driving out of Matz’ garage last year, but he isn’t done with custom car building. Matz now has his mind set on a new project involving a BMW V10 engine and a hot rod. I for one cannot wait to see how his ideas and skills come together for that.