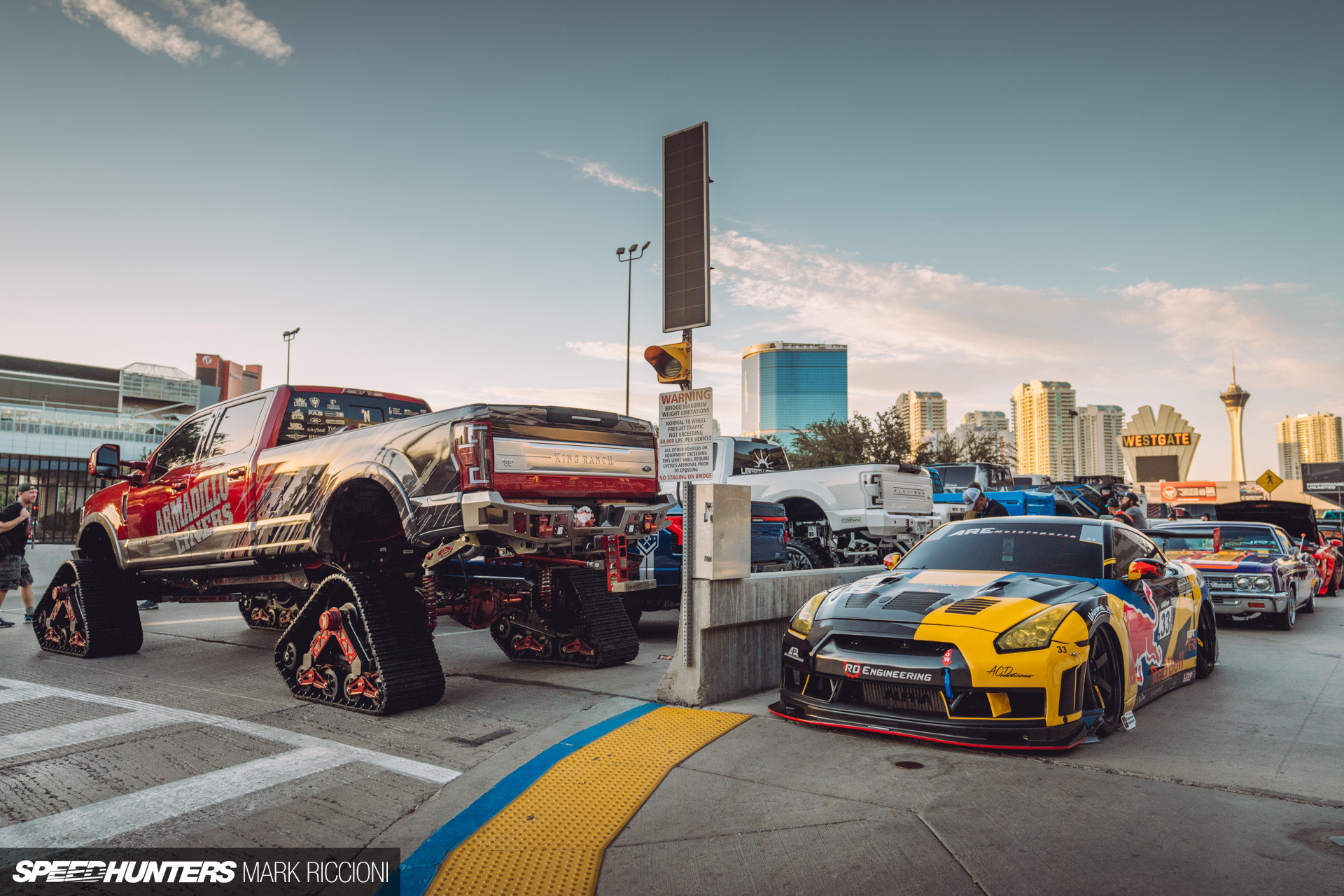 Imagine putting your entire Spotify playlist on shuffle and handing it to a friend.

The end result would be fairly similar to your first day at the 2022 SEMA Show. Some things will be entirely expected, others a little more surprising. Some tracks will transport you back to an era long forgotten, and the rest will make you question why you even consider that person a friend.

It all makes for an entertaining few hours, though. And – for SEMA at least – it’s yet another insight into how completely mad the tuning world can be.

If you caught our preview post earlier in the week, you’ll know the general consensus going into SEMA 2022 was that it would be busier than last year’s restricted event, but still much quieter than ‘traditional’ years.

If day one at SEMA 2022 was anything to go by, that’s exactly how it’s panned out. But here’s the thing, the show feels much better for it, even if SEMA’s organisers wouldn’t necessarily agree.

Thinking back to pre-pandemic times, physically getting around SEMA was all but impossible unless you could get in extra early on an exhibitor pass.

Now? Thanks to various brands dropping out at the last minute, there’s real space around the halls meaning photography and filmmaking can actually take place.

I’ve never heard the pandemic referred to as Corona Lashae, but according to a very nice security lady at the convention centre’s South Hall entrance, many people are still avoiding Las Vegas because of Lashae’s potential appearance.

Seeing as the cast of SEMA aren’t exactly an advert for better health, I respect the honesty, especially given how global this show’s attendance has traditionally been.

But that’s enough chat about the venue and past restrictions; what about 2022 – what’s it actually like? Well, it’s been nearly three years since the last proper SEMA Show, so you’d hope there might have been a bit of a shift on what kind of cars people are building. Let’s dive in and find out…

Bolt-on overfenders. They’ve been a meme of previous SEMAs and while there are still many cars running ‘em, there seems to be a lot more consideration for how they’re actually used rather than simply fitting the widest arches to a half-built car.

Liberty Walk and Pandem have pioneered this look in recent years, but this is automotive fashion don’t forget. And while fashions come and go overnight, proper style lasts forever.

Used on the right application it’ll always be a hell of a look, but whoever sent the memo to stop fitting overfenders on every ’90s car with a European badge deserves a beer.

Domestic Builds Are Back On Top. Imports? Form An Orderly Queue

American cars at an American car show – slow news day for Speedhunters, isn’t it? But with costs spiralling for import cars (and parts) in recent months, many of those builds shipped from overseas have either not been finished in time due to parts shortages, or canned due to the expense of putting them on display.

Those cars might be Speedhunters’ bread and butter, but it’s super refreshing to see so many generations of ‘Merican muscle all taking centre stage at this year’s show. Personal favourite? Terry Kirven’s ’85 IROC Camaro Z28 which just oozes badass. More on this soon.

Want To Show Up A McLaren P1? Get A Toyota 4Runner… And A 2JZ

In any other situation, a flip-coloured, BBS-wearing McLaren P1 would be a justified showstopper. At SEMA? It’s somehow shown up by a 1993 Toyota 4Runner.

Owned by Scott Kanemura, the first thing you’ll notice is the 3.4-litre drag-spec 2JZ engine bursting out the front of it. On high boost, that’ll be sending 1,200hp to the rear wheels.

Thankfully, the Toyota’s entire chassis has been built from chromoly tube to stop it twisting in half, but the coolest thing has to be the old school RAYS Volk Racing Gr.C wheels, custom-barrelled and shod in drag radial slicks.

The Cost Of Living Crisis Hasn’t Hit The BroDozers Yet

Polarising is one word used to describe these cars; terrifying is another suitable one. Whatever your take on these, the most mind-boggling aspect of every BroDozer is the amount of money spent. Readers, does anyone know what actually happens to these things after SEMA?

Garage Active’s R32 GT-R Is A Work Of Art

Pioneering the wide-body, carbon-fibre, slammed R32 Skyline ‘look’ is niche even by SEMA standards. But this isn’t Garage Active’s first rodeo. Nor is it even their first SEMA, having shipped a similar car out for last year’s show.

But for 2022? The team at Active have gone all-out. Air-ride, custom centre-lock wheels, a 1000+horsepower HKS-built RB30 engine matched with a sequential gearbox, and their signature carbon wide-body, this time finished with a thin layer of Midnight Purple paint for good measure. The fact it was driven around the Las Vegas Strip before being loaded in makes it all the better.

If you’re wondering why SEMA coverage feels a little limited beyond iPhone uploads, it’s because the Las Vegas Convention Center thought it’d be reasonable to charge US$79.99 per day for 1.5Mbps Wi-Fi. That’s not a typo either; read the small print and it’ll also state this Wi-Fi cannot be used for streaming video, presentations or business use. At a show exclusive to both exhibitors and media.

Go back a few years, and this hall would always house the majority of ‘hero’ builds from all the wild and wacky wheel manufacturers, who went wider, lower and louder with every design.

These days it’s predominantly inhabited by wheel machines, alignment tools and tyre brands with names that look like a cat has ran across a keyboard. It’s also half the size of previous years, but don’t discount it when you’re here.

It’ll take some scouting, but the odd gem will make itself known, like the Renner Projekts’ stand. Any booth boasting a V10-powered E30, V10-powered E28 5 Series and a M5 V8-powered E39 8 Series is going to be relevant to our interests. There’s a full spotlight on this BMW trio of awesome coming very soon.

The 2022 SEMA Show on Speedhunters