Getting Back Into Speedhunting At LZ Fest 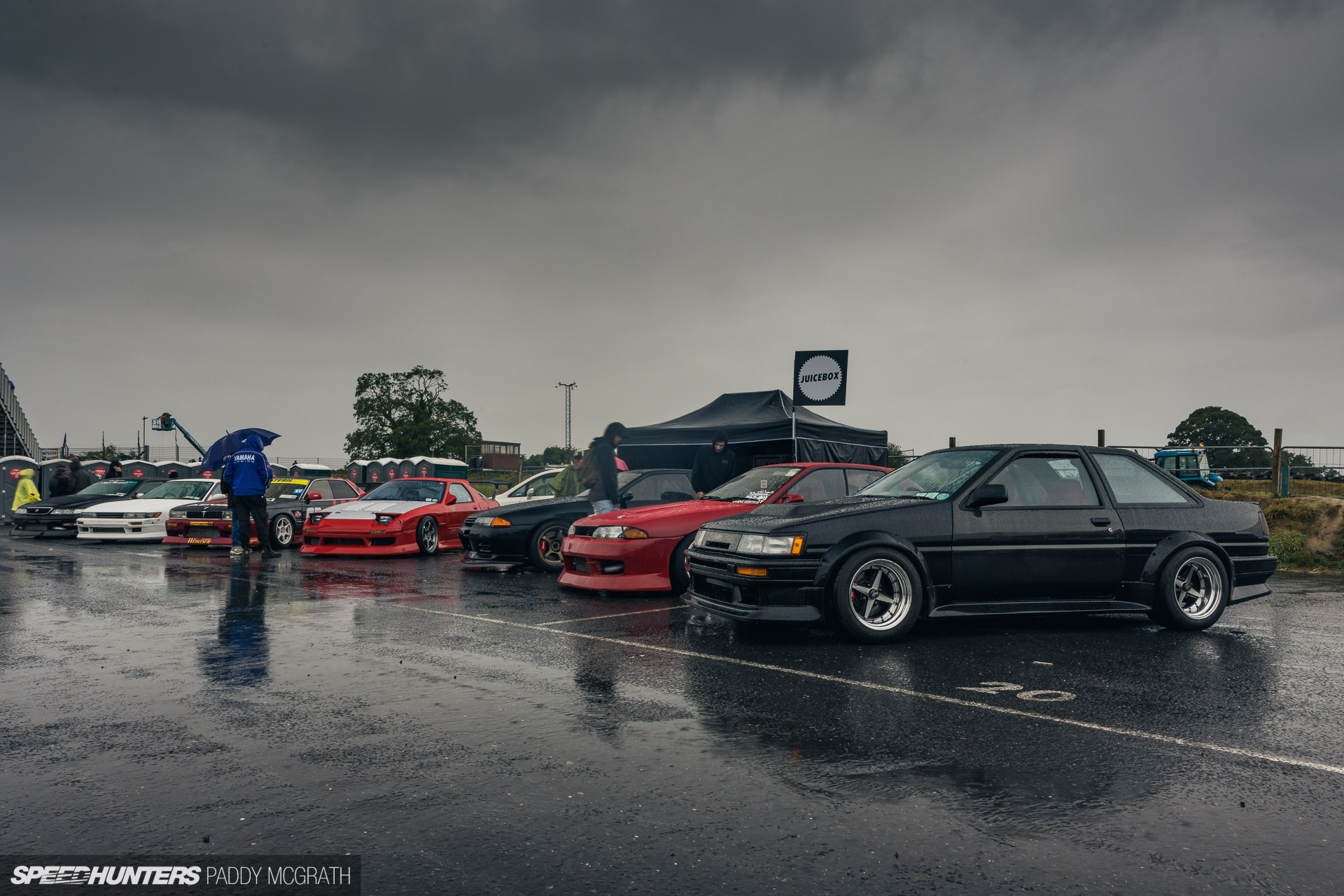 In the (not that) famous words of Aaron Lewis, it’s been awhile. In fact, it’s felt like an eternity since I’ve last done any real Speedhunting in earnest. Sure, there was a day out at Dubshed, but that was purely for my own amusement.

Part of this has been down to life being a bit different in 2022. I’ve been working as a full season photographer in Formula E, photographing three other Irish motorsport championships, and shooting commercially for a host of brands. Then there was a wedding, which when combined with the other things, took up a surprising amount of time.

There’s also the hard-to-admit fact that I just haven’t been feeling it with regards to modified vehicles and car culture for a while. I’ve been deep into this world for well over a decade, and I felt like I had reached full saturation point with it all.

Things that should have excited me, just didn’t anymore. This was worrying because those same things were exciting others, so I felt I needed to step away for a little while.

It was surprising then, that an American YouTuber would be the one to try and drag me back into the fold. Well, not Adam LZ himself directly, but his first international festival, which would be held at Mondello Park here in Ireland.

Although I do try to live under a rock as much as possible these days, I was actually aware of Adam and his YouTube channel. I wasn’t, however, aware of just how popular he is with an international audience.

To put things into perspective, the LZ Fest shattered the attendance record at Mondello Park. It attracted more people to the venue than any other drift, British GT, British Touring Car, British Superbike and FIA Sportscar event ever held at the circuit in the past. For a race circuit which has been open for over 50 years, that’s a pretty impressive feat.

This particular event was organised by long-time friends of Speedhunters, Drift Games, and they must have pulled in every favour they were ever owed to lure so many high-profile guests across a stormy Irish Sea for the weekend.

I felt that this should be the event to reignite that flame inside me for something I’ve spent so long with before. Due to scheduling, I could only afford to attend one of LZ Fest’s two days, but I was determined to make it work.

With no client pressures, I was only in attendance to shoot for you and I. It was time for some old fashioned Speedhunting.

If there was ever a sign that this was going to be a good day, Phil Morrison‘s GT1-inspired Lamborghini Murciélago rolling menacingly up the pit lane and out into the show car paddock was probably it.

The naturally aspirated V12 has been equipped with ITBs and mated to a manual 6-speed gearbox, and that’s before you get into the genuine Reiter Engineering GT1 wide-body, which has been perfectly crafted and smoothed onto the car. Honestly, it might be one of the very best things I’ve ever seen on four wheels with my own eyes.

The Drift Games stand itself was host to a pretty strong selection of cars, but these two PS13s were the picks of the bunch for me. The dark silver example is indeed the OG Spirit Rei car.

Triple8 Customs brought along a few past Speedhunters feature cars, and a certain future one as well. With a turbocharged Honda K24, this is an S15 I cannot wait to shoot on the road soon.

Our friends at Juicebox, in their own words, tried to put something professional together for the first time. They succeeded. I do think we’re overdue a barbeque, however?

Josh Greene was supposed to have his newly-built S15 here, but he managed to break the gearbox when leaving for the event. You can preview the car on his Instagram account, but it’s another S-body you can expect to see here soon.

It’s a pretty big deal when UK brands make their way over to Ireland, and it’s something which I think should always be appreciated. A decent mix of Euro and Japanese cars certainly added variety to proceedings.

Ireland is still very much a haven for Japanese cars, however. It’s been a while since I’ve seen a Nissan Pulsar VZ-R in the metal, and this one was a peach.

While the drifters were the star attractions, they only had limited running on the Saturday, and in the rain. LZ, the Shanahan brothers, James Deane, Collete Davis, Becky Evans, Jimmy Oakes, Driftworks, NightRide and Low Origin were just some of the sport’s ambassadors for the weekend. From what I’ve seen and read elsewhere, they put on one hell of a show on the Sunday.

The show itself remained my primary focus for the day.

I still can’t believe this many people showed up on a Saturday (renowned for being the ‘quiet’ day of a Mondello Park weekend) and in the worst weather imaginable. It didn’t stop raining all day, but the precipitation had no affect on anyone’s mood.

In a sort of sadistic way, I really enjoy shooting cars in the rain, although I don’t enjoy getting wet. No company has yet to create clothing or outer layers that are Ireland-proof.

The main lower paddock featured the larger portion of static cars for the day. It also prompted the realisation that Ireland really, really loves four doors. There’s a separate post in the making on that particular subject.

It’s been a very long time since I last attended a dedicated Japanese car show in Ireland (the Juicebox BBQ doesn’t count as a ‘show’, in my opinion) so it was a pleasant surprise to see how all things JDM have been progressing.

For the most part, there appears to be a much higher standard of Japanese cars being built. Better parts being used, better attention to detail, and better ideas and execution. That there appears to be less and less reliance on replica wheels is another good thing.

This S2000 on Enkei NT03+M wheels with Nitron suspension and a big ol’ Garrett turbo is running in excess of 500hp at the rear wheels.

Variety in approaches was impressive, too. This PS13 on small wheels and featuring a large ducktail-type spoiler was all sorts of fantastic.

As was this 180SX on a set of classic bronze RAYS Volk Racing TE37s.

I noticed a lot more Japanese cars on air suspension at LZ Fest. I think this can only be a good thing, particularly when trying to pull off big, deep, polished wheels.

I just hope they (all) have their driving heights and pressures dialled in, as how they roll is just as important as how they air out. This S14A was a bit of me.

A Rothmans-liveried MkII Ford Escort is always going to be popular here. I’ve never smoked – I think it’s an awful addiction – but race car liveries just haven’t been the same since tobacco advertising was banned.

I recall Cian featuring one recently, but I can’t remember the last time I’d seen one in person. The white O.Z. Racing rally wheels with all-terrain tyres are just such a good combination here.

It’s a similar situation with this suspicious-looking Hilux with TE37Vs and Hoosiers. I’m not sure they would be much use around a cold, damp Mondello Park, but they set off internal alarm bells that scream ‘best not to f*ck with this.’

Much the same as cars with parachutes, or old men driving cars with fuel pumps louder than your exhaust.

I probably wouldn’t have expected a 2JZ in a Ford Capri, however.

Despite the weather conspiring against us on this particular Saturday in September, it was a prelude to what was a genuinely special weekend for Irish car culture. I’m not entirely sure if it was just me that felt it, but it was a welcome shot in the arm.

Feel free to browse the rest of the event gallery below at your leisure, while I get stuck into the next story in this series. Oh, and before someone points it out in the comments, yes, a particular Audi is finished, and yes, we’ve already photographed it.

More stories from Ireland on Speedhunters