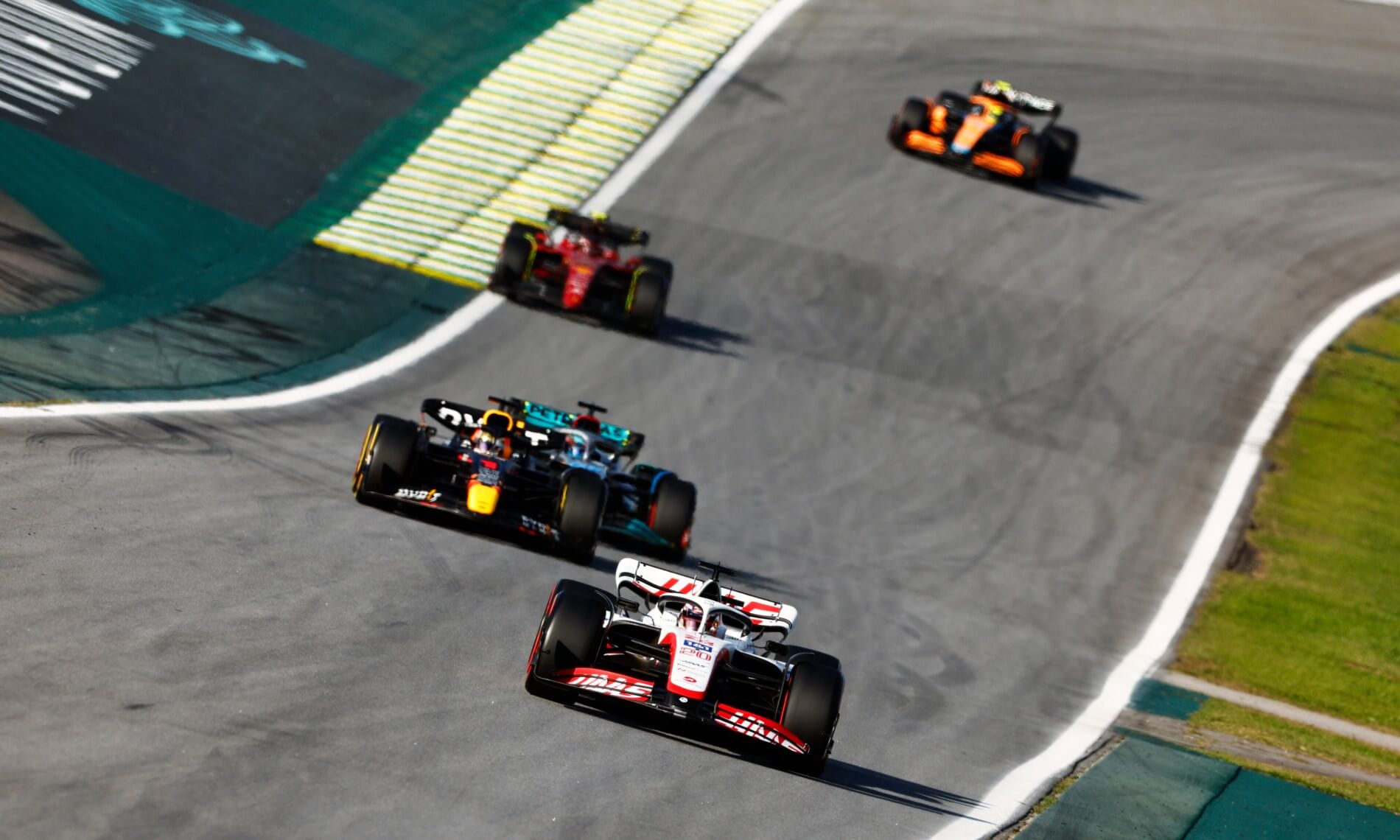 The F1 circus visited Interlagos, Brazil for the penultimate round of the 2022 world championship. The circuit is situated not far from the country’s financial hub, Sao Paulo. The run-off area at Turn 1, previously populated by houses, was where former Brazilian winner Rubens Barrichello grew up. Brazil is particularly passionate about motorsport and boasts no fewer than eight F1 world championships. Emerson Fittipaldi won twice, Nelson Piquet and Ayrton Senna three times each. The Interlagos round hosted the third and final sprint race for 2022 as part of the race weekend.

Mercedes finally put themselves on the winning scoreboard for 2022. Both drivers were looking strong over the weekend, but it was George Russell who shone. The Englishman charged into the lead in the sprint race and took victory, ensuring pole position in the feature race. He converted the pole position into his maiden F1 victory, posting the fastest lap in the process.

Click here to check out our dedicated Formula One section.

Lewis Hamilton’s week started well, when he was made an honourary Brazilian citizen. He performed well in the Sprint Race, finishing third. Hamilton had an early meeting on track with the 2022 champion, Max Verstappen (Red Bull). The two drivers fought for the same piece of tarmac, but Hamilton was helped off the circuit. While Hamilton continued, Verstappen was penalised and plummeted down the order. The seven-time champion showed pace throughout the race and chased his teammate to the chequered flag.

Ferrari also showed a good turn of speed over the weekend, but had some maladies to deal with. The team made the wrong call on Charles Leclerc’s final qualifying run for the Sprint Race, which hurt the Monegasque. Carlos Sainz drove strongly in the sprint race to finish second and followed that with third place in the feature race. Leclerc’s pains continued in the feature race, being unceremoniously punted off the circuit by birthday boy, Lando Norris (McLaren). Leclerc managed to get back to the pits for service and drove well to finish fourth.

Team Alpine had an up-and-down weekend. The two drivers, Fernando Alonso and Esteban Ocon, clashed twice in the early stages of the sprint race. Alonso was penalised for his transgression and both drivers had to start the feature race well down the field. It was a good Sunday for the team, however, with Alonso finishing a brilliant fifth, with Ocon eighth. The Frenchman had to be strongly convinced to allow the Spaniard through late in the race.

Red Bull had an unusual off weekend, not finishing on the podium in either the sprint or feature race. Verstappen tangled with Hamilton and it took some time for him to emerge in the points-scoring positions. Perez ran strongly in the feature race, but slipped out of a podium position in the latter stages.

He allowed his team leader past, in the hope that they could close the gap to Leclerc and Alonso. As the Mexican and Leclerc are vying for runner-up in the world championship, Perez expected the position back at race-end. Incredibly, the Dutchman refused to do so, resulting in an intense discussion behind closed doors post-race. Verstappen finished sixth, Perez seventh.

Other notable performances included Valtteri Bottas (Alfa Romeo) doing well to finish the feature race in ninth position. Lance Stroll finished tenth for Aston Martin. This, after having his knuckles rapped again, when he ran teammate Sebastian Vettel off the road in the sprint race.

Haas team owner Gene Haas turned 70 over the weekend. Kevin Magnussen gave his team boss a perfect birthday gift by taking his, and the team’s, maiden pole position. The Dane scored a point for eighth position in the sprint race, but his feature race lasted half a lap. Daniel Ricciardo (McLaren) tripped over the Dane, damaging both machines extensively and forced them both into retirement.

Verstappen (429 points) has an unassailable lead in the 2022 F1 world championship. Perez and Leclerc are  vying for runner-up in the standings tied on 290 points. Russell (265 points) now has a 25-point lead over teammate Hamilton (240 points).

Red Bull Racing (719 points) has won the constructors’ championship. Ferrari’s (524 points) second place over Mercedes (505 points) is under threat. Alpine (167 points) and McLaren (148 points) continue to duke it out for fourth in the standings.

The final round of the 2022 F1 world championship will be held in Abu Dhabi on 20 November. The circuit is generally uninspiring and difficult to overtake at, so qualifying will be vital. One hopes the race will provide a spectacle to end the season well.