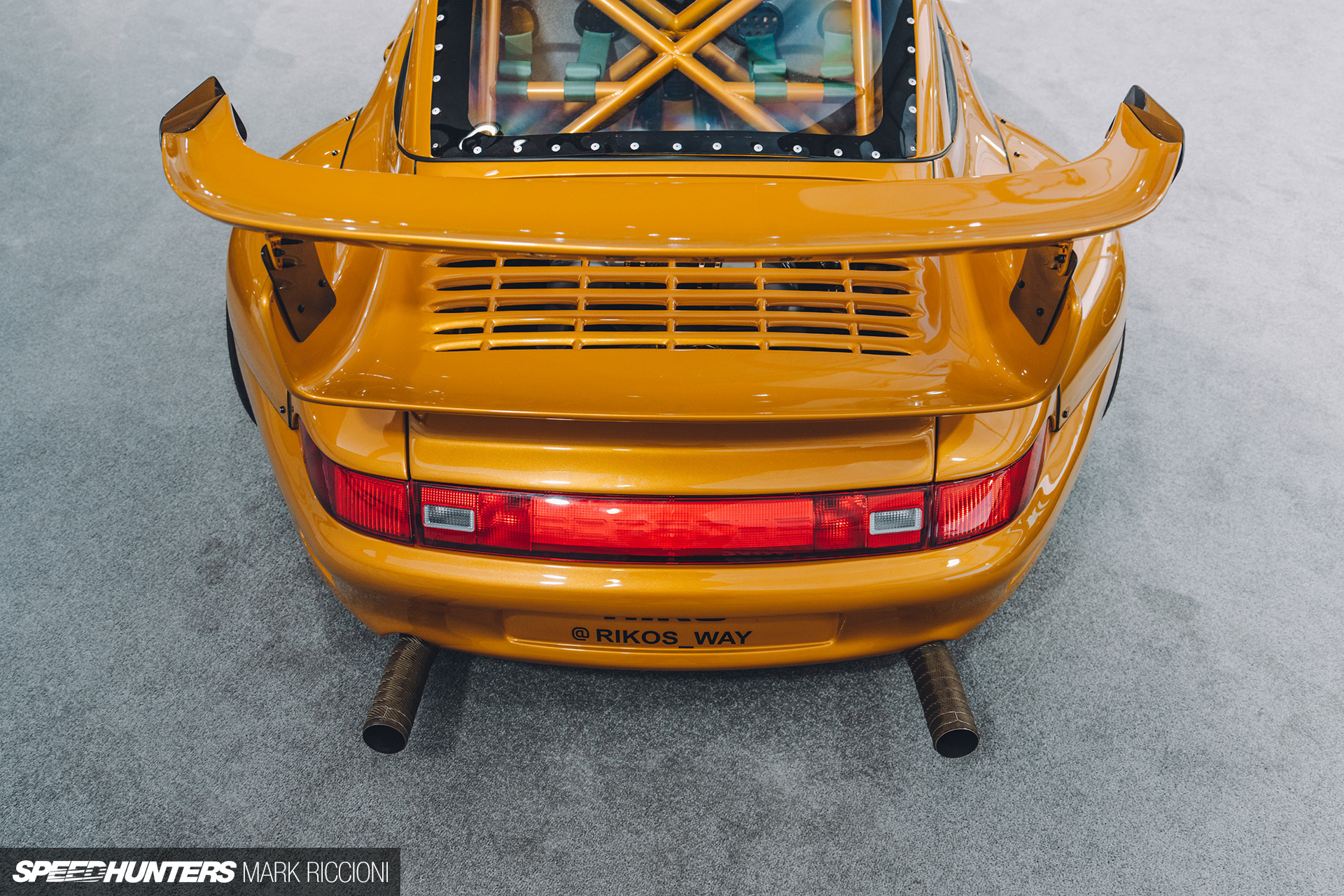 Riko is no stranger to SEMA, or to Speedhunters for that matter.

In fact, his RWB 993 Porsche 911 Targa – Yoshiwara – was featured by none other than Dino five years ago in Las Vegas, though Riko was only there for the RWB Gruppe meeting rather than the SEMA Show itself. In 2019, Riko attended SEMA in full, exhibiting his completely transformed AE86 with a 3S-GE BEAMS heart, stripped cabin and bulky body kit. Two years later, his IMSA-inspired 240Z found its way into the Toyo Treadpass with a wide-body thicker than, well… insert whoever you thought of.

For 2022, Riko has gone three for three at SEMA with a completely new take on an ‘old’ build.

RWB Yoshiwara was originally started over six years ago, but the project was abandoned by the previous owner. Riko purchased the 993 in an incomplete state during October 2017, and immediately set about finishing the car with Nakai-san.

Shipped from the factory with an automatic transmission, Riko swapped out the boring Tiptronic unit with a G50 gearbox, but says the car never really felt complete. Coupling this feeling with a trip to Japan that changed everything, Riko decided to step back from the RWB for a while. He could drive and enjoy it in the meantime, but he didn’t want to tear into it or seriously modify it again until his true vision for the car was complete.

Five years later, it was finally time for some big moves with the 993 chassis. We’ll get into the real ethos behind the build in a complete feature and backroads drive with Riko’s RWB after SEMA, but for now let’s focus on the basics. If you can call them that.

Most immediately noticeable is the sleek, curved Lexan window that replaces the tinted Targa glass that the car was delivered with. Being a factory Targa, RWB Yoshiwara has always stood out, but this update alone just makes the body style even more striking.

Then there’s the color. Riko describes it only as Riko could: “We call it ‘1978 Aged Inca Gold’ to represent how I have matured and become seasoned through this pursuit of automotive passion.”

I like how Riko reflects on himself to detail the hue, which is darker and deeper than the shade used on his other cars. The custom color continues through the completely stripped-out cabin which now features a full welded-in roll cage.

The cockpit also received the first set of limited edition RWB x Bride bucket seats, the sparkling silver backs of which stand out against the bold gold-and-black color scheme. There’s an AiM digital dash unit flanked by factory gauges, a CAE shifter for the G50 transaxle, and many more details for us to dive into during the full feature.

A party piece that cannot be ignored, though, is the revamped 3.6-liter flat six that sits in the freshly-shaved engine bay. The air-cooled powerplant is topped with a Rasant GT3 intake assembly that feeds independent throttle bodies, and machined Rennline valve covers also have been added this time around. Oh, and see that Speedhunters sticker on the front window? That’s still in place after the first feature all those years ago.

The engine exhales through Fabspeed headers and a custom-fabricated exhaust, the wrapped tips of which terminate way past the rear fascia. I’m thinking it’s an engine that I’ll need to hear (and feel) wide open to fully appreciate.

Another well-suited feature that ties everything together are the recently released Work Meister M1 3P wheels, which utilize ultra-deep and mirror-polished barrels. They measure 18×11-inch up front and 18×14-inch out back, and are unsurprisingly wrapped in meaty Toyo Proxes R888R rubber.

Some other components, like the wing as well as the nose, remain largely unchanged from the first RWB iteration of the car. However, everything is now tied together in a better way than it was before, and overall the 993 is a completely different animal.

As with Riko’s previous cars, the majority of work on the build was completed by Marcus Fry Racing, while the color was created by Jose Ayala and the paint itself was laid down by Juan Ayala at 24/7 Auto Body of Redwood City, California.

Riko also wanted to thank our mutual friend Ezekiel from CM Autohaus for helping with assembly on the last day before the car was shipped to SEMA. It takes an army, but Riko says that securing his third consecutive slot in the Toyo Treadpass is “proof of the hard work… believing in yourself and your team.”

Through all of the hard work, Yoshiwara isn’t only more mature and refined. It is also more raw, more Rough World.

And that is the point, isn’t it?