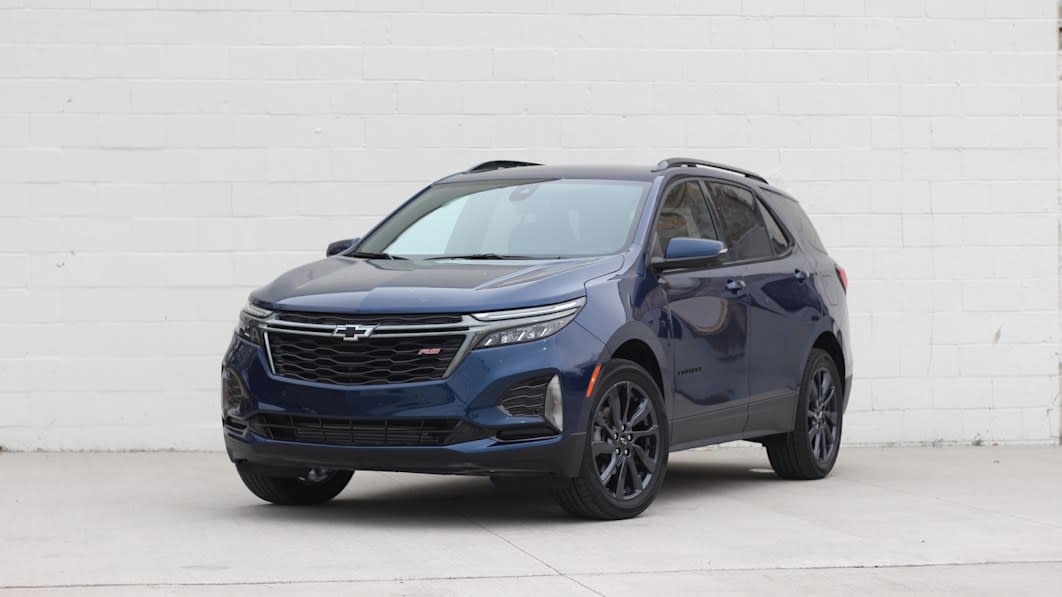 There’s no shortage of choices in the compact SUV space, and the 2022 Chevrolet Equinox quite frankly gets lost in the scrum. It’s a bland vehicle with little to excite or offend from the curb. Most of its key elements like passenger space, fuel economy, power and more are merely average at best, and there is very little that truly sets it apart from the rest. Prior to the Equinox’s mid-cycle refresh, it offered an odd diesel engine option and even had a 2.0-liter turbo option that made it one of the most powerful vehicles in the segment. Both were dropped in previous model years, so your only option now is an uninspiring (but efficient) 1.5-liter turbocharged four-cylinder.

On the plus side, the Equinox offers many of the expected features and tech items you might be looking for in this segment. Its infotainment system is easy to use, and a plentiful amount of driver assistance systems are available if you want them. If blending into the background is your goal, the Equinox won’t disappoint. Even the RS and Premier trims don’t outwardly project or attract extra attention. We’d ultimately suggest you look elsewhere in your compact crossover search before settling on an Equinox..

Before we get into exactly what’s new, note that all of the following was originally scheduled to be released (and was revealed for) the 2021 model year Equinox. Due to the pandemic, GM pushed the update back a year.

The above said, 2022 is a big year for the Equinox, because it’s the model’s mid-cycle refresh. It gets new front and rear fascias, new headlights, taillights and a new RS trim. The RS is the sportiest looking of the bunch, adding a bunch of black exterior trim, dark-painted 19-inch wheels, RS logos throughout and red interior stitching.

On the tech front, Chevy added wireless Apple CarPlay and wireless Android Auto. Plus, it now has heated, power adjustable side mirrors and more available safety tech. New interior trim is used for LS and LT models, plus the Premier gets a small makeover both inside and out to separate it further from the other trims.

What are the Equinox’s interior and in-car technology like?

In its simplest form, the Equinox is comfortable but sparsely appointed. Take a trip up the trim ladder to either the RS (above) or Premier and the interior feels more premium. The red accents on the RS give it a modicum of personality, and the two-tone, leather-appointed seating option offered on the Premier trim is both attractive and pleasing to the touch. It may be a step up from, say, a Ford Escape, but most other competitors provide a richer, more inviting ambiance.

Wireless Android Auto and wireless Apple CarPlay integration are both standard on the base LS trim, and this plays on a 7-inch infotainment system. You can upgrade to an 8-inch screen from the LT and above if you want a little more real estate. Chevy’s infotainment systems are fairly easy to use as a general rule, and the Equinox is no exception. Where the interior starts to feel its age is when you look out over the boring center stack and sea of unexciting black plastic. There’s nothing here that is outwardly offensive, but it’s the embodiment of boring. Many other compact crossovers out-style the Equinox, but if basic is what you want, basic is what you’ll get here.

How big is the Equinox?

The Equinox belongs to the compact family of crossovers, compared best to segment sales leaders like the Toyota RAV4 and Honda CR-V. It’s comparable in footprint to these models, making it eminently usable for small families, but still easy to deal with in urban settings.

You get reasonable headroom both with and without a sunroof, and rear-seat passengers will be plenty comfortable too, thanks to abundant legroom (39.9 inches). On the flip side, the Equinox offers large-car practicality, with just under 30 cubic feet of cargo capacity behind the second row, or nearly 64 cubes with the rear seats laid flat. This is considerably less than the Honda CR-V, Toyota RAV4 and Hyundai Tucson, and also south of the Subaru Forester and Nissan Rogue. It’s still a very practical space with a usable shape, but know that others are better.

What are the Equinox’s fuel economy and performance specs?

The base (and only one for now) engine is a turbocharged, 1.5-liter inline-four that makes a respectable 170 horsepower and 203 pound-feet of torque. This is on par with other entry-level engines in the segment. The 1.5-liter is paired with a six-speed automatic transmission, a combo rated at 26 mpg city, 31 highway and 28 mpg combined with standard front-wheel drive. All-wheel drive drops those figures to 25/30/27 mpg.

There are no powerful engine upgrades available, nor a hybrid option.

The Equinox is a reasonably agile handler for a tall crossover. Even with the Premier or RS trim’s large wheels and thinner tire sidewalls, others in the segment are more engaging and responsive to drive, but for a family car, the chassis reacts quickly enough when changing directions and is rock-stable through sweeping turns. The steering is the biggest let down. It’s fairly sensitive and precise everywhere except just off-center, but it’s very numb and devoid of feedback. This is especially disappointing since the Chevy Blazer is a stand-out member of its segment in regards to driving dynamics. Ride quality is firm enough to inspire confidence, but ultimately skews more toward comfort, which is for the best.

The Equinox’s little four-cylinder is rather anemic when you’re trying to get up to highway speeds, and it’s not a pleasant noise at full throttle. Low-end torque is plentiful to get up to speed around town, but acceleration isn’t this car’s strong suit. That can be said for the base engines of many rivals, though. Really, the shame here is there’s no longer a more powerful engine upgrade available, nor a hybrid. Most rivals offer one or the other.

It’s important that we touch on the Equinox’s unusual (and optional) all-wheel-drive system. Most AWD cars utilize a system in which the front wheels are powered all of the time, and when they slip, some portion of available power is routed automatically through a center coupling (whether a clutch pack or a differential) to the rear wheels. The Chevy Equinox’s AWD system can only transfer power rearward when it’s turned on, making it a part-time system. This means the driver has to choose to turn it on when conditions warrant it, setting up the possibility of forgetting to do so and missing out on the benefits of AWD when needed the most. Now, this system does offer the promise of improved fuel consumption, but the Equinox’s fuel economy is far from class-leading.

What other Chevy Equinox reviews can I read?

Our first take from behind the wheel of the 1.5-liter Equinox.

We went back to sample a 2.0-liter Equinox for comparison purposes.

How much is the 2022 Equinox’s price and what features are available?

You’ll want the RS trim — $31,295 — if a sportier exterior look is important to you, and the Premier — $32,145 — has as many extras as possible baked in as standard. The one downside of the Equinox’s relatively agreeable trim base prices is all the money in packages and options you’re likely going to want to spend. Even the Premier is lacking lots of equipment you might expect to be included. Fully loaded, you’re looking at a crossover nearing or cresting the $40,000 mark. And that’s with the weak 1.5-liter turbo.

Here’s the full breakdown and pricing for the 2022 Equinox lineup, but you can find a full breakdown of these trims levels’ features, specs and local pricing here on Autoblog.

These are the base prices for FWD models. Just add $1,600 to get the price for AWD.

What are the Equinox’s safety ratings and driver assistance features?

The 2022 Equinox didn’t receive any awards from the Insurance Institute of Highway Safety (IIHS). However, it scored “Good” ratings in every crash test except for the side impact, in which it received a “Moderate” score. On the government side, the National Highway Transportation Safety Administration awarded the 2022 Equinox an overall five-star crash test rating. The only test it didn’t score a perfect 5 stars in was the rollover test, where it was awarded 4 stars instead. That’s typical for a crossover SUV.