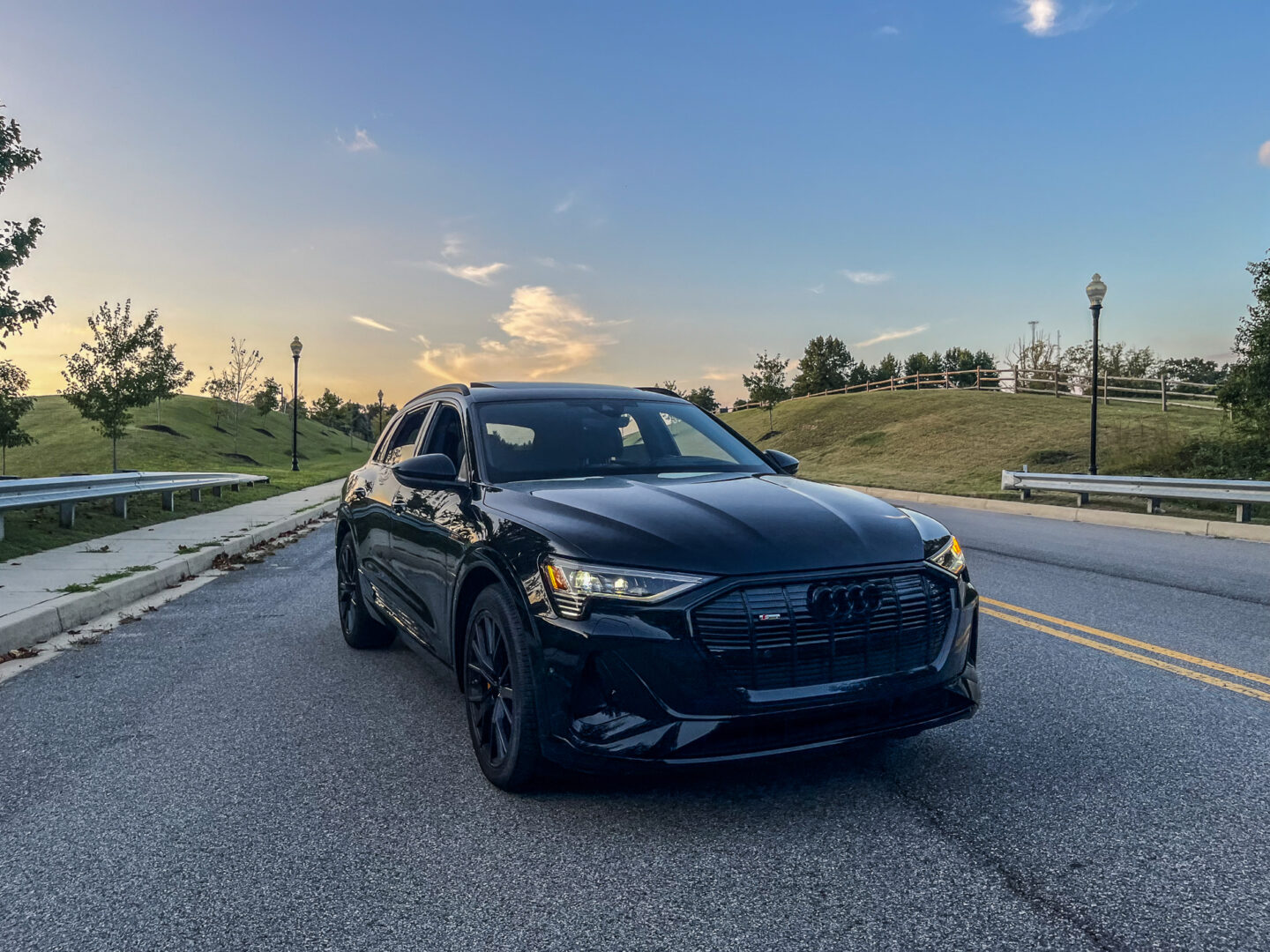 Creating an EV typically means making it abundantly clear to everyone that it’s an EV at first glance. Whether that is done by penning a futuristic exterior, or adding some sort of over-the-top screen to the interior, automakers can’t seem to help themselves when it comes to making their EV stand out. Audi took a different direction with their e-tron EV SUV, it looks like a…luxury crossover…from Audi. Other than the lack of holes in the front end where a radiator would draw in air, you can’t really tell it’s an EV. Even said front end has lines drawn in where a typical Audi grille would live. So, is the e-tron enough to stand out in the EV world? Let’s get at it.

Believe it or not, Audi’s all-electric e-tron SUV has been on sale since the 2019 model year. I would have said it came out in 2020 or 2021. Jeff drove it even spent 60 hours crossing the country in one! Audi technically skipped the 2020 model year and for 2021 range was boosted from 204 to 222 miles on a full charge. They also added a new base “Premium” trim to line up with other Audi models.

Trim levels had another shakeup for the 2022 model year, with the Chronos Edition replacing the prior top dog Prestige trim in the e-tron lineup. Chronos sounds like it’s either timepiece-related or the plot hatched by a Bond villain, but just like the Prestige trim it comes massively well-equipped. Starting at $86,400 (2023 details shown below) I suppose it should, right?

Some key features for the 2022 Chronos included:

The 2022 e-tron isn’t an inexpensive proposition, with a starting price of almost $71,000 just for the base model. Our Chronos Edition tester, with a few add-ons, came in at $86,505 out the door. Let’s get into some details to see if this “looks like a regular Audi” is worth the price of admission.

(I’m adding a new feature where I list the first thing I thought when I saw the e-tron. I call it “first impressions” because it’s the first…you get it)

First Impressions (exterior): The e-tron almost looks like a wagon (good thing). It looks long and low, later I’d find out that the adaptive air suspension adjusts depending on drive mode.

The e-tron may look like a normal Audi, but the clean design works well and unlike a lot of EVs (and new cars writ-large) the e-tron is largely free of unnecessary slats and creases. The result is a handsome exterior, though not everyone will be a fan of the “paint everything black” trim on the Chronos Edition.

First Impressions (interior): The inside is largely “Audi” (also good) with a similar dual screen install and overall ergonomic layout of other Audi SUVs. The only nod to EV’dom is the thumb-activated shift lever. Otherwise, it’s standard Audi goodness inside.

I love the wrist rest, it aligns perfectly with the center console allowing me to comfortably rest my arm during long drives. That shift lever is interesting, that’s a new one in the ever-evolving world of new shift levers. It’s sort of reminds me of a toggle switch on a fighter plane, where you would use your thumb to laser the target.

I felt like Bob in Top Gun Maverick! Stay on target…wait that’s Star Wars. Well, you have to admit that was a similar plot.

The center console has an adjustable height center console to help you dial in your elbow resting spot. However, like the Tiguan I just reviewed, there isn’t actually a latch. It just raises and lowers. Not sure it needs one, but I found it interesting. Critiques on the inside were very minor, the cup holders are too tight for a can of soda. Well, it technically allows the can in, but pinches the bottom of the can as you try to remove it. Seriously nit-picking here, the inside of the e-tron is fantastic.

The e-tron is a practical grocery getter and daily driver, and with 39 inches of rear legroom it would be great for road trips. Assuming you map in some charging stops, more on that in a bit.

Cargo capacity with all seats in place is a generous 28.5 cubic feet. That’s three more cubes than a 2022 Audi Q5, which makes sense since the e-tron is about nine-inches longer than the Q5 while height and width are similar.

Matching the bad-boy looks, the e-tron is putting out a robust 355 horsepower and 414 lb-ft of torque. Supposedly that gets a boost to 402 horsepower and 490 lb-ft (for up to 8 seconds) when in Sport mode. It’s no secret EVs are heavy, and the e-tron weighs in at a robust 5,822 pounds. So, temper your expectations on rocket ship performance, but the e-tron gets up to speed rapidly and has plenty of passing power.

When you change drive modes the suspension raises or lowers, and the e-tron has a ton of modes. In addition to the typical stuff like Dynamic, which lowers the vehicle, the e-tron also has “Allroad” which will raise the suspension. The e-tron’s curb weight will keep it from being a real treat on a curvy road, but there is enough tech in the adaptive air suspension to keep things flat and in control. Braking was stable and adequate in daily driving situations, and if you aren’t paying attention the auto-braking system will keep you from putting that grille into the back of an F-150. Interesting tidbit, if you let off the accelerator on even a slight incline it will roll back a bit like a manual.

The tech is substantial. At one point I was not even within sight of a red light and it was showing up as red on the heads up display and on the dash. There are tons of small details that make driving (mostly) safer, though the lane-keeping assist did try to wrestle the wheel out of my hands a couple of times as it misread the lines on the road.

The e-tron has a frunk, sort of. As you can see from the image-compare above, it’s more of a storage compartment for the charger. Speaking of charging, it charges really slow on the mains (110 volt). I had it directly plugged into an outlet in the garage, and later via an extension cord (sorry, had to charge the Mach-E too) and it was very slow to add juice overnight, only going from 56 to 84 miles of range. I attempted to stop at an EVgo fast charger and after cycling through all of the prompts thought it was charging. I came to find that it had not.

Out on the road, the 222 estimated range is likely plenty for most people to use on a daily commute. As Jeff noted (if you can get the charger to work) it will charge quickly on a higher voltage connection so longer trips should be OK as long as you map in the stops. I did notice that driving quickly will really drain the battery, which isn’t a huge surprise. However when starting with 180 miles of range, I did a 60 mile round trip and was down to 100 miles of range when it was all said and done. I was running a little late to get my daughter to the dentist, so I was fully in Dynamic mode for the entire drive.

Still, the e-tron is fantastic out on the road. It’s smooth, it’s comfortable, and it’ll cruise at highway speed (and above) with ease. At least until you have to stop for a charge.

In the end, I like that it feels like a regular car/wagon/SUV. There are a lot of great EVs out there, but most feel like they are trying too hard. This is a luxury SUV that’s also an EV. Not an EV that’s had luxury bits added to it. As Jeff concluded, “We’re nearly at the point where driving an electric vehicle is as boring as anything else… in a good way.” I actually didn’t read that until after the e-tron had left, I typically try to avoid reading reviews of cars I’m going to review (plus I don’t read Jeff’s stuff anyway, kidding!) but was left with the same notes in my phone. In this case, boring is good. The 2022 Audi e-tron is a great vehicle that happens to be an EV.